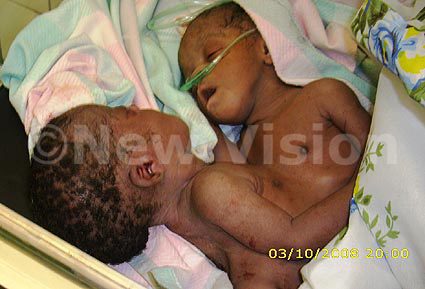 The conjoined twin girls who were born in Mbarara referral hospital on Saturday by cesarean section have died before being transferred to Mulago hospital to be separated.

They have been in intensive care unit on life support machine at Mbarara hospital’s pediatric ward after parents failed to raise sh300,000 asked by the hospital administration to fuel an ambulance to take them to Mulago hospital where, they were referred on Sunday.

Dr. Upenytho, said before the twins died, the devastated young couple escaped from the hospital on Monday evening, leaving the twins under the care of the grandmother, Saidat Namandde, a resident of Kyazanga, Lwengo district.

Polly Namaye, the Rwizi region Police spokesperson, said they were looking for the parents.