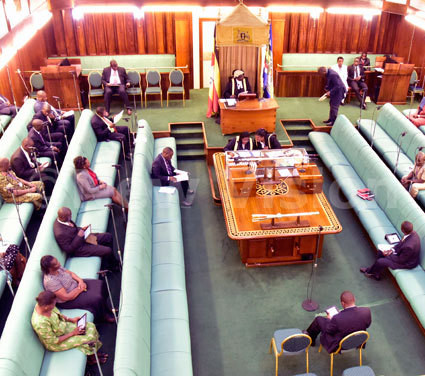 ANTI Corruption Coalition Uganda (ACCU) has petitioned the Speaker of Parliament, Rebecca Kadaga over legislators who dodge proceedings and proposed that such MPs should be forced to forfeit part of their salaries.

In the petition received by Parliamentary Commissioner, Rose Akol yesterday (Wednesday) ACCU contended that MPs absenteeism “is a clear form of corruption and a complete negligence of duty.”
The petition dubbed “citizens petition” was handed over to Akol by ACCU Executive Director, Cissy Kagaba.

“We ask you Hon. Rebecca Kadaga to take firm and immediate action against absentees. MPs who are absent without authorisation, should be forced to forfeit part of their salaries and /or allowances,” Kagaba.


Present was the chairperson of the committee on rules, discipline and privileges, Jacob Oboth, who is West Budama South MP.

Since the session began, raising quorum has been a big hindrance to planned parliament business.

While meeting a visiting delegation of MPs from Zimbabwe recently, Kadaga said she would ask the parliamentary commission to revert to the previous payment system for members of parliament which is tagged to their attendance.

Citing the example of Israel where attendance is good because of a similar payment system, Kadaga said, “One mistake we made was to consolidate pay. We need to go back to the old system such that members feel the pinch (when they do not attend sittings).”

The Leader of Opposition, Wafula Oguttu, commenting on a recent premature adjournment of the house, said, “I think the solution is to do what is done in Ghana, Zimbabwe, and Europe where attendance of MPs is published. That record can be used against MPs who rarely attend.”

The petitioners quoted Article 83(1)(d) of the Constitution which requires an MP to vacate his or her seat if he or she is absent from 15 sittings of parliament without written permission of the speaker.

They recalled the Anti- Homosexuality Act, which was quashed by Court for being passed without quorum.