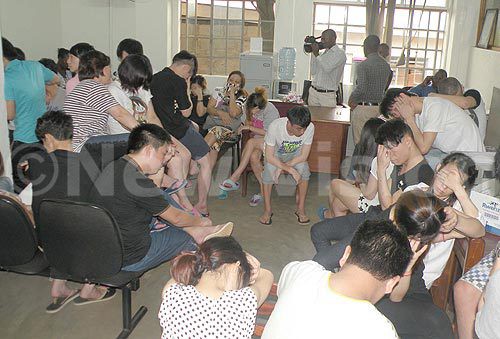 The Directorate of Citizenship and Immigration Control has arrested 35 immigrants in Entebbe suspected of being involved in money laundering.

The directorate’s deputy spokesperson, Benjamin Katana, Wednesday told journalists that the immigrants – 33 Chinese and 2 Thai – were arrested in a swoop along Church Hill Road at a plush residence on Plot 50.

“Acting on intelligence, we were able to arrest 35 illegal immigrants in Entebbe today. They were closed in a residence that is well furnished with computers, telephone sets and high internet facilities. But none of them is in possession of a work permit or passport, which is contrary to our immigration laws as pertains to foreigners,” said Katana, at the directorate’s offices at the ministry of Internal Affairs.

The suspects, who could neither speak English nor any local language, were paraded before journalists. They shied away from the prying cameras as they covered their faces. Katana explained that they are still establishing the identity of the company they were working for since there was no sign post at the residence where they were arrested from.

He said they were also investigating the owner of the building from where the suspects have been operating.

“We are waiting for their employers to come and produce their passports and work permits to prove their claims that they are here legally. Most of them come here as tourists but flout the immigration rules and settle in Uganda. If they don’t produce their documents, we shall arraign them in court and contact the relevant embassies to process their deportation,” added Katana.

He appealed to firms that seek to employ expatriates to follow the right channels and ensure that they obtain work permits for them to legalise their operations in the country. He further urged the public to volunteer information relating to illegal immigrants to the relevant authorities.

Katana noted that last year, over 1000 foreigners, most them Chinese, were deported after they were found to be living and working in the country illegally.