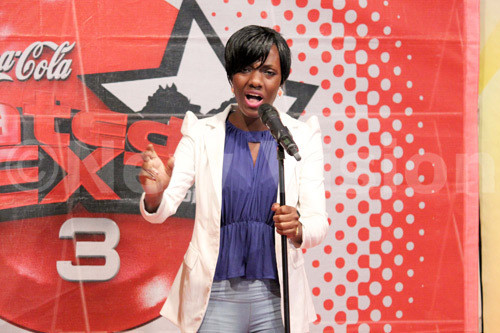 Coca- Cola Rated Next sing it, national level auditions have taken to a rather interesting start here at the Ndere Centre auditorium in Kampala.

It is round one where 50 have made it to an even harder level.

The 50 were selected from the more than 100 that made it from the different regions around Uganda in a 2 month long search.

A contestant praying before performing

It will be noted that in this level, the comics are gone and the cream is sieving out.

It goes without saying that the judges Esther Nabaasa, Siima Sabiti and Ken Daniels Kayongo are disagreeing on so many decisions.

"I thought your performance was better than your singing," Nabaasa told a one Maggie Kisaali.
Immediately Siima said, "I thought she did really great!"

Luckily, Ken Daniels was on team Siima and it was a yes for her.

The afternoon will be seeing the 50 put in groups of five and given a few seconds each to sing a line or two and convince the judges they deserve a spot on the top 20.


Note that Coca-Cola rated next is a singing competition whose winner will take home sh50millions, a one year recording deal and an iPad.

Catch episodes of the show on Urban and Bukedde TV.

Coca-Cola Rated Next: 2 qualify for Kampala

Coca-Cola Rated Next:3 make it from Arua to Kampala

Coca-Cola Rated Next returns for Season 3