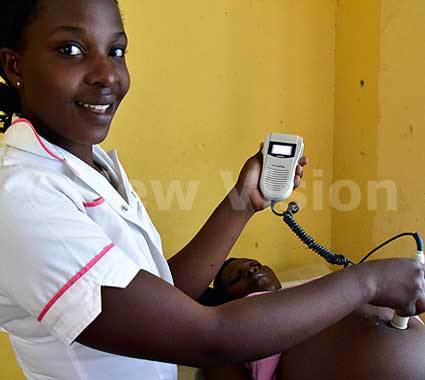 GULU - The ministry of health is working with the public service ministry to develop a new recruiting structure for the health workers in public health facilities.

Dr. Chris Baryomunsi, the state minister for health (General duties) said the current staffing structure of 1992 was constricted and even if all vacancies were filled it would not help bridge the staffing gap in the health service.

Baryomunsi noted that the new structure would create an opportunity for promotions and easy absorption of other professionals like graduate nurses who were not recognized under the old structure.

The minister made the remarks on Thursday in Gulu municipality while addressing a debate on the role of midwives in Uganda.

A student midwife demonstrates to a first time mother how to hold a baby at Mulago hospital.  PHOTO/MARIA WAMALA

The debate was the climax of the midwives4all campaign initiated by Embassy of Sweden in Uganda in collaboration with Vision Group.

“We have a challenge of few health workers with rising population which needs to be solved to improve on service delivery,” Baryomunsi explained.

The minister equally challenged health workers to be professional by following the ethics despite some challenges they face at work places.

“Patients will always expect quality service delivery and therefore have the right attitude to serve them,” Baryomunsi noted.

He equally cautioned health workers against selling mama kits to delivering mothers adding that they were enough in the national stores to last the whole year.

Hellen Oluka, a midwife from Moroto regional referral hospital, observed that as midwives they faced challenges of expectant mothers coming late for delivery.

Oluka said life saving did not start at the labor ward but right from home and yet in case the mother died at the door entrance to the ward, the blame would go to the mid wife.

She emphasized that for services to be delivered, there’s need for the mid wives to be equipped with enough tools and the community support should be at its best.

“Sometimes, we cannot detect some complications like the sudden and acute rise in blood pressure so that a referral is made immediately to protect the life of the mother because we do not have a blood pressure machine,” she noted.

She also observed that, at certain health facilities midwives are forced to improvise and use torches to deliver mothers which makes it hard to visualize the birth canal.

A couple from Atiak sub county in Amuru district that had a baby on May 18 at Atiak health Centre IV applauded Margret Anek, a midwife who helped them in the middle of the night.

Ketty Akello said when the contractions started at night, her husband put her on a bicycle but she could not continue with the journey.

“My husband Geoffrey Opira left me at the roadside, and went to call the midwife who listened to us and came. As soon as she arrived, the baby was already coming out,” Akello explained.

Urban Anderson, the Swedish ambassador to Uganda noted that maternal death in Uganda is gender inequality.

Anderson said as long as women continued to be marginalized economically, politically and socially, maternal health would remain a fundamental question of democracy and equality.

“We must challenge the traditional gender norms which tend to privilege the well-being of men and boys at the expense of women and girls,” he said.

“And we must engage men in maternal health by mobilizing fathers, husbands and brothers to support and encourage women to go for antenatal care and give birth in a health facility,” the ambassador emphasized.