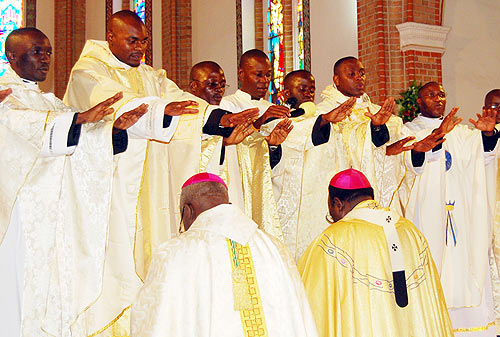 The first Ugandans to be ordained priests were Victor Mukasa Womeraka and Bazilio Lumu. They were ordained at Villa-Maria Parish in Masaka Diocese by Bishop Henri Streicher, then Vicar Apostolic of Northern Nyanza, on June 29, 1913.

According to the book A History of African Priests, by the late Fr. John Mary Waliggo, Streicher met lots of resistance when he suggested training Africans into priesthood. But he is quoted as having responded: “To get one indigenous priest is, for me, more important than converting 10,000 people.”

The two priests were among the first six seminarians who were admitted at a new seminary at Rubaga in Kampala, before it was relocated to Kisubi, near Entebbe. Laer, it was then relocated to Biikira, Kyotera in Masaka, to Bukalasa and finally to Katigondo in 1911.

According to Waliggo, Streicher introduced a tradition, which continues to this day during ordinations. Just after the first ordination, which was massively attended, he knelt down before the two fresh priests to receive their blessing.

It had never been imagined that a whiteman and a bishop at that, could kneel before an African and ask for his blessing. The ululation was deafening!

Anglican Church historian Louise Pirouet later wrote: “This ordination was an event of immense significance to the Catholic Church in Uganda and elsewhere in Africa.”

Mukasa-Womeraka was 38 years old and Lumu, 31, when they became the first native priests in Africa, south of the Sahara. Christians partied and feasted on cows, goats and chicken donated for the occasion by the people, including the local Buganda chiefs.

Lumu celebrated his first holy mass at Katigondo, while Mukasa-Womeraka had his at Villa Maria.

Victor Mukasa-Womeraka was born on May 5, 1882, at Buubwe-Bugaaju, Matale Catholic Parish, Masaka Diocese. His parents were Petro Lugi of the monkey (Nkima) clan and Anne Ndisala of the bush buck clan (Engabi).

His mother died when he was four and he was brought up by his maternal grandfather and uncle. He joined the catechumenate at Villa Maria in 1893 and was baptised the following year. After his baptism, he remained at Villa Maria, serving the parish priest, the Rev. Fr. Henri Streicher. He also looked after the parish office’s goats.

In 1897, Mukasa-Womeraka accompanied Streicher to Bukumbi on the southern shore of Lake Victoria in Tanzania and witnessed his episcopal consecration by Bishop John Joseph Hirth on August 15, the same year. Impressed by the new bishop’s homily on the importance of training an indigenous clergy, Mukasa-Womeraka joined the junior seminary at Kisubi in September 1897. He was ordained a priest in 1913.

Fr. Basilio Lumu was born in Bukalagi, Gomba district, in 1875. His father was Wamala Lumu from the sheep (Endiga) clan and his mother was unknown. Both parents died when Lumu was a toddler. He was baptised at Rubaga on September 8, 1891.

Following the years of the 1892 religious wars, his family fled to Buddu (Masaka), where most Catholics migrated. Lumu attended school at Kampungu Kalisizo in Masaka, now Rakai district.

When he joined the seminary, there were 33 students, but only Lumu went on to become a priest in 1913.

After he was appointed to teach at Bukalasa Minor Seminary. He remained there till 1918. He later served in different parishes. Lumu died in March, 1946, at the age of 54 and was buried in Bukalasa. His remains were later transferred to Villa-Maria Church.