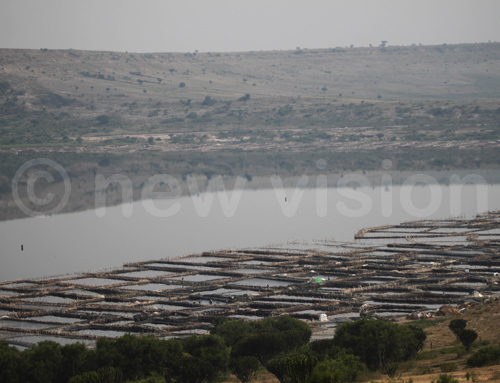 FROM a distance, you view the factory that was meant to process the salt, intact a few metres away from the lake, including the huge pipe that used to pump salt effortlessly from the lake. As you go past the factory, you come across fine tarmac leading to the salt mines.

Moving close to the fields, you go through rock formations that seem to have formed during the process of the lake formation. Their shapes make one feel like they are entering a cave. The rocks look like the perfect work of a professional artist.

The smell of hydrogen sulphide and ammonia gas engulfs the air, but this does not deter people from doing their work.

Below is a crater lake that was formed by volcanic eruptions that occurred about 10,000 years ago. Unique networks of paths and huts are built across the lake.

It is a busy hour. Some people are cleaning the salt others are weighing and packing salt rocks and table salt to sell to traders from across Uganda, and as far as Congo and Rwanda.

In the clearly demarcated plots, women are busy scooping salt from the salt pans, using pieces of iron sheets, the brown water in other pans has turned red, producing an unbearable smell, but the women seem not to be deterred.

Jane Nakimbugwe has been extracting salt since 1980. Her late husband inherited the salt pan from his parents in the 70s. When he died, she took over the pan as the sole owner.

The salt miners work using crude methods and they know the risks this entails, but they also have to survive so they soldier on.

“It is hard work and quite risky but if you have needs, you can do every work that comes your way. The salt burns my hands but after a few days the burns cure. Women have to be extra cautious because if the salty water enters one’s private parts, it means complications. I am a widow with eight children; if I do not work then my children won’t go to school,” Nakimbugwe says.

Fred Kiiza too has been working in the salt mines for decades, his day starts at 8:00 a.m. and ends at 5:00p.m., he says he spends most of the day in a bent position extracting salt from deep waters, and he has to endure the hot savannah sun.

“I endure the profuse bad-egg stench of hydrogen sulphide mixed with ammonia all day. This is dangerous but I have nothing to do, I want my children to go to school,” he says.

These are just examples of thousands of people working on the salt mines at Lake Katwe, located in Western Uganda, Kasese district- in the East African rift valley region. The water in this lake is 60% salty. The region is semi-arid and the soil doesn’t favour agricultural activities. Therefore the major economic activity here is salt mining.

According to Patronella Birra, an interpretive guide, salt has been extracted from this lake since the 13th century. The lake is demarcated in 12x18 feet and 3 to 5 feet deep plots owned by private individuals or families.

“The salt is in three types; crude salt which is given to animals, edible salt (sodium chloride) and unwashed salt. The three processes are done by both men and women; salt scooping from the salt pans is carried out by the women and the rock salt extraction is done by the men 3 days a week,” she explains.

She adds that, though the lake is part of Queen Elizabeth National Park, it cannot support any wildlife. However since the 16th Century; it has ensured the survival for the villagers.

The lake is known for its salt production and has been producing high quality salt for many years. Lake Katwe is found within an explosion crater in the formerly active volcanic area northeast of Lake Edward and southeast of Lake George.

The lake is found in the small rundown town of Katwe on the outskirts of the Queen Elizabeth National Park in Kasese district and covers approximately eight square miles. Its shores are lined with small pans of water from which salt is extracted from the bottom in a process called salt panning.

The salt content of the lake waters is approximately 13.5%. The lakebed is 0.8 metres thick and contains approximately over 12 million tonnes of salt, varying in composition and depth and has salt stocks, which are estimated to sustain an industrial extraction plant with a production rate of 7 tonnes of salt per hour for 34 years.

Perhaps it is this estimate that had swayed the Germans to try and extract the salt in a mechanised way. They set up an industry in the 1950s but the processing did not take off because of the corrosive salt.

George Kachanchu a guide at Lake Katwe says, salt panning is usually carried out by women in two seasons; early January to mid-March, and early July to mid-September.

He says salt extraction attracts over 15,000 people during the dry season and over 10,000 during the rainy seasons when the pans are flooded.

In the middle of the lake there are “vents” which go from the main salt rock to the outside. They are scattered in different parts of the lake.

Water from the streams go through “the vents” and dissolves the main rock in the ground.  Because of the volcanic pressure that liquid is compressed and forced outside as manga. On the outside it is dissolved to become a salt solution, which quickly turns into salt.

Men wear condoms as they work

Kachanchu says the salty water affects men’s organs if it enters the urethra, causing sexual and reproductive complications. “To safeguard against the complications, we wear condoms because they are waterproof. We then also bind the condoms with rubber bands or strings to ensure safety. The bands tend to cut off blood circulation and we do not know if it is dangerous, all we need is to avoid the salt,” Kachanchu says.

For women, he says, the ammonia gas, when escaping from the salt water, usually penetrates through the female reproductive organ and can irritate the uterus. “We advise them to pad themselves heavily and wear tight pants. This controls the stomach pains many women complain of when the salty water goes into their stomachs,” he says.

In the 16th century, salt was regarded such an expensive mineral and was exchanged for other items like clothes and guns.

Salt mining in Katwe is one of Africa’s oldest industries still surviving. It has played an important political and economic role in the history of the western part of Uganda.

The explorer H.M Stanley was the first white man to make a written report of the history of salt Exploitation at Lake Katwe during his journey to Africa in 1875, he also took with him a sample of salt which was analysed in London and Alexandria in Egypt.

Salt production had become particularly important to the economy of Bunyoro-Kitara kingdom during the 18th and 19th centuries and was the basis for the regional and distance trade in the region prior to the event of external influence from the East African coast.

It is said that some West African kings like King Shaka of Zululand wanted to conquer the lake in an attempt to gain control of this lucrative commodity.

In fact the salt deposit and salt work at Katwe was one of the main factors that precipitated the breakaway of Toro Kingdom from Bonyoro Kitara during the 19th century. The salt lake became property of the King of Toro.

Between 1929 and 1933 the Arabs and the Indians living in Katwe subverted the administration of the salt lake.

By 1940 permanent buildings (offices, store) were completed and Katwe linked to the main Mbarara – Fort Portal road. In those years salt production was boosted by the new developments and they used to harvest between 500tons to 5000 tons per year in the 1950s.

Lake Katwe with a circumference of 8km is the largest salt lake in Uganda and its 21streams pour in fresh water from the surrounding rocks.

According to the residents, the major problem in this area is accessing medical care. Malaria remains a big threat. They have a small health centre that they fee is not sufficient.

Kagando Hospital, a government facility, is 14 kilometres away and in case of an emergency transport to the hospital can be quite a challenge. Kilembe Hospital is also located 30 kilometres away.

The total population in this area is over 20,000 people and half of them survive directly on the lake.

Dr Salim Batale of Rubaga hospital says, working in salt mines is dangerous especially to women because they have mucus membrane in their vagina that when exposed to salt can lead to dehydrating the mucus. The salt can also lead to loss of water in the body.

“When the ammonia gas from the salt water gets into a woman’s reproductive organs; it causes uterus irritation and abdominal pains. This shows how dangerous the salt is,” he explains.

“The ministry should devise measures of protecting these people working in the mines. Much as they use condoms and pads, this is not perfectly safe,” he adds.

Dr. Wadria Baker Ronald Kuluva hospital Arua says tightening the rubber bands on the men’s genitals can only affect blood flow when they are tightly wrapped on the penis. So if it was of any effect then their body parts would not be functioning.

“Miners can use protective gears such as the plastic gloves and Coveralls this can substitute the use of condoms because it can slip off any time. I believe they are expensive but you buy at once then use for a long time before replaced,” he explains.

The commissioner Department of Geological Surveys and Mines in the Ministry of Energy and Mineral Development, Edward Kato says Lake Katwe has been owned by the residents for edges so they ministry cannot take away this treasure from them because it is where they earn a leaving.

“All we have done is to sensitize the people on the safe measure they can take to avoid being affected by the salt. We also trained them on how to mine the salt in the right way without depleting the lake. We also sensitized them on hygiene because the salt they mine is exported to other countries,” Kato explains.