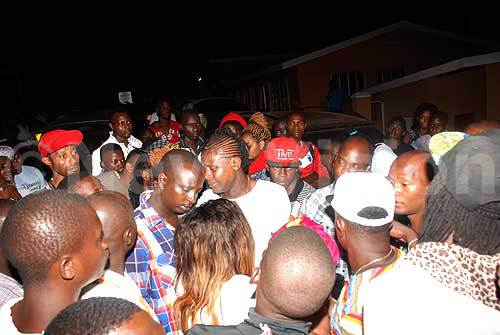 As details of the shocking death of musician Emmanuel Mayanja Hummertone aka AK47 emerge, reports indicate the young musician was possibly beaten in a bar in Kabalagala before he died on arrival at Nsambya hospital.

The bar has been identified as DEJAVU,  and belongs to Jeff Kiwanuka, a former manager of the singing duo of Radio and Weasel.

A disconsolate Chameleone visibly shocked by his younger brother's death

Singer Pius Mayanja aka Pallaso (in blue), another brother of AK47, is consoled by an equally shocked Bebe Cool following the death the young musician

Kabalagala police criminal investigations boss Nusulah Kemigisha shed more light on the bizzare circumstances under which AK47 slipped and fell in a urinal.

Reports indicate AK47, a younger brother to singer Jose Chameleon (Joseph Mayanja), was beaten first and then went to the washroom to clean up, where he is thought to have slipped and fallen.

“We suspected foul play after realising the body had bruises on the chest and we decided to close the bar as investigations take shape,” Kemigisha said.

One of Akay's latest music videos