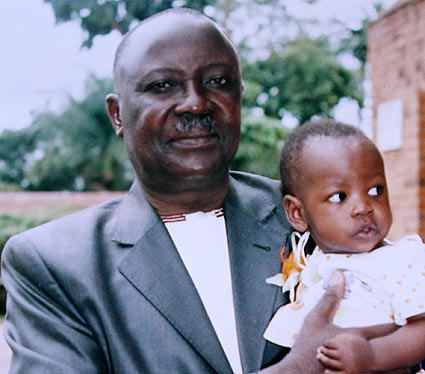 You can't be faulted for calling him complete.

An all-round journalist, the late Dan Kyazze did it all – a reporter, news anchor, presenter, editor. Journalism was where his heart lay, and it was this very passion that burned on until the end of his life.

News of the death of the 72-year-old veteran rippled across the country early Friday and it was met with as much shock and grief as with celebration of his decades-long life in the world of media.

Tributes immediately poured in for the old-timer who had retired from radio broadcasting a while back.

To many, he was a living dictionary and a databank of radio journalism because of his vast experience that made him an inspiration to many both senior and young journalists aspiring to take on the career.

Kyazze stepped into eternity at Kadic Hospital in Kampala on Friday at 2.00am local time (EAT), after succumbing to liver cancer. His family describe him as a caring, smart, punctual, loving man who always strived to make his family happy.

“Daddy has been a clean smart man. Even on his death bed, he always wanted to tuck in the hospital shirt, until nurses would intervene,” said Elizabeth Nakinga Kyazze of her father.

“Daddy appreciated beauty. Last Saturday, he called me and whispered to me that I looked beautiful. He liked complimenting people, even the maid [house help]. Whenever a maid prepared a nice meal, he would tell her how nice the food was.

“He was welcoming and never discriminated anyone. He was a perfectionist and if he told you to polish his shoes, you had to do it like a cobra.”

Nakinga says that her father was good at keeping time, was eloquent and he loved God. It’s no wonder he was always on almost every church committees at Nateete Martyrs Church.

The fallen journalist’s only sibling, Oliver Kyazze, described him as a strong pillar in the family.

“We were born only two. By the time I was born, he was already on radio. I related to him as a father and not as a brother, because he loved me so much. If he said something during a family meeting, no one would ask questions. I will never have someone in my life like him,” she said.

Dan (standing) at work at Uganda Television (UTV) – now UBC – back in the day. (Courtesy photo)

Kyazze was born on February 14, 1943 to Bazilu Lule Kyazze and Eseza Nanyojo of Kasokoso, in Buikwe district.

His rich legacy in the industry dates back to the 1960s when he started reading news on Radio Uganda and then-UTV where he spent 30 years. He later joined WBS Television as a news anchor.

In the 1990s, in the advent of FM stations, Kyazze joined Radio Akaboozi where he spent 10 years reading news in Luganda.

“Kyazze was one of the smartest journalists I knew. No wonder he always stood out. I wish other young journalists learn from him,” said Beti Kamya, formerly Rubaga North MP and now Uganda Federal Alliance (UFA) president.

“Whenever he spoke to you, you would not fail to give him a comment because he was warm and calm.”

A neighbor of Kyazze’s remembered his principles and respect for morals.

“I will never forget him for his principled lifestyle and respect for cultural and religious morals. He was a good neighbor who never missed attending people’s burials and being there for others in need,” said Jimmy Rogers Ssendaula.

Stuart Yiga, a local journalist, recalled Kyazze’s attention to detail as well as his love for what he did.

He spoke of the veteran news anchor: “Kyazze loved his work – a talented man who encouraged and corrected us whenever we did something unprofessional. He was always on time. I remember a time he called me at 4.00am to correct my story which he was going to air later on at 6.00am. I will miss him.”

“I used to enjoy his style of reading news during my primary and high school days in my home district of Mbarara,” Umar Kashaka, also a journalist, spoke of the veteran.

“He was in a class of Samuel Kityo Sserunjoji and Ssemwanga Lutaaya of Radio Uganda now UBC. He was one of those people who inspired me to become a journalist.”

Kyazze, survived by 14 children and a widow, died a devoted Anglican.

He will be laid to rest at Kasokoso village in Buikwe district, his ancestral home on Monday at 2.00pm local time (EAT). There will be a funeral service at Martyrs Church in Nateete at 10.00am.

UFA president Beti Olive Kamya said Kyazze was one of the smartest journalists she had ever known. (Photo credit: Tony Rujuta)

Pictured here is Dan with his family at the Equator crossing in his youthful times. (Courtesy photo)

Dan (black suit) with his family back in the day. In the background is his car, a Peugeot UUV 905, that he drove for a long time. (Courtesy photo)

true
Daniel  and Alice Jane Kyazze on their wedding day on May 11, 1968. (Courtesy photo)

Here, Dan and Alice Kyazze display a certificate of appreciation from the Buganda Kingdom at Bulange Mengo. (Courtesy photo)