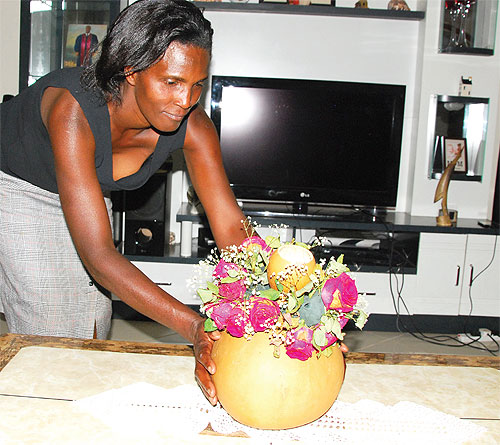 For 17 years, Beatrice Tumuhairwe has served in the Muhumuza household as their maid. They have grown to love, so much that she has become part of the family

Off Entebbe Road at Bwebajja, towards Akright Kakungulu Estate, the Muhumuzas take a right turn to the home they have lived in for two years now.

The house is so grand that one wonders how much work its caretaker has to do to keep it pristine. The mind then conjures up images of a big, imposing woman as the maid in this household that can easily clean it.

Yet Beatrice Tumuhairwe is a somewhat tall, woman of unimposing height with a calm, serious expression.

But her small sunken eyes give her away — they radiate with warmth.

Tumuhairwe is the loyal maid who has worked for Herbert and Gladys Muhumuza since January 1998 — 17 years now.

“The first time I arrived at the house of the Muhumuzas, I wondered how I would manage to live there. It was a grand house,” Tumuhairwe says.

Then, the family lived in Mbogo zone, Kawempe in Kampala.

She says the children helped to make her feel at home. “I was welcomed by Diana, Brenda, Paula and Laura, who gave me a glass of passion fruit juice and showed me my room and the bathroom, so I could freshen up,” she says.

Tumuhairwe says the fact that they  shared a language, Runyankore, also  helped her get comfortable.
In the evening, Gladys returned and showed Tumuhairwe how the cooker worked. She carefully watched how her new boss cooked her food — only boiled food. When dinner was ready, they all sat down to eat at the table.

“I was so nervous. Mummy told me to add myself more food since the rest of them were already full, but I declined,”
Tumuhairwe narrates of her first day at work.

The following day, she got up at 6:00am, made tea and put it on the table in time for the family’s breakfast.

“By the second day, I was used to the work. The children were with me throughout the day, answering my questions and engaging me in conversations,” Tumuhairwe says.

The Muhumuzas and their five children. Tumuhairwe joined the family when the children were very young. She has watched them grow

She says since then, there is no house chore she cannot do and she loves to cook. Gladys attests to Tumuhairwe’s love for the kitchen, saying she makes good groundnut sauce.

On why she has worked for the Muhumuzas all these years, Tumuhairwe says: “Time just flew. I am at home here. I take them as my parents, and the children as my sisters.”

She explains that unlike maids who fear children, she does not because the Muhumuza children are well-behaved and pleasant.

“I have never beat them. When you hit children, they fear you,” Tumuhairwe says.

No surprise then that Diana, the eldest of five children, sings Tumuhairwe’s praises.

“The biggest problem we had with maids was punishments. The last one before Tumuhairwe was called Annet. She would keep a record of our week’s misdemeanours and punish us over the weekend when our parents were away,”

Diana, who was in S1 when Tumuhairwe joined the family, recalls.
She says she is fond of Tumuhairwe because she cares about her and her siblings a lot.

“She still checks on me as if I am a little girl. I think I grew fond of her, even more than my other siblings because I was in a day school for A’level and would spend a lot of time with her,” she says.

After about five years, Tumuhairwe felt that she had worked long enough for the Muhumuzas. She toyed with the idea of returning to her home in Rwamujojo, Sheema district to farm, but when she found out that Gladys was expecting a new baby, she decided to stay.

Sometimes, maids get upset when more children are born into a family because of the extra chores that come with taking care of an infant, but not Tumuhairwe.

“When Joel came, I was not worried because I am a mother of two girls. I liked Joel. He used not to cry. I would bathe, feed him and put him to bed,” Tumuhairwe says.

Today, Joel is a 13-year-old boy. He has never known any other maid in the house.

“She treats me really well. She packs for me eats for school and looks after me when I am sick,” says Joel, who also helps Tumuhairwe with the dishes.

Now that all the children are grown up, Tumuhairwe has a few chores and has resorted to a side-business of making pancakes for sale. Gladys helps her sell some of her products at her shop at Grand Imperial.

“I wake up at 2:00am and go about making pancakes until 5:00am, then I start preparing breakfast. When they leave for town, I go back to bed,” Tumuhairwe says.

Gladys says Tumuhairwe does not have a designated day-off because she has ample time to run errands and go to church for fellowship.

Herbert is retired after working for 29 years at Bank of Uganda as the deputy director of communications.

Tumuhairwe says her initial pay was sh30,000 a month, but this fi gure has gone up signifi cantly over the years.

“Apart from the good pay, I have stayed because the Muhumuzas love and respect me. They even paid for my children’s education,” Tumuhairwe says.

She adds that one of her daughters did not do well enough to make it to A’level, but wants to do a catering and she has big plans for her.

Tumuhairwe’s other daughter got pregnant and dropped out of school. So close are the Muhumuzas and Tumuhairwe that she chose to convert from Catholicism to being a born-again Christian. In 2013, the Muhumuzas spent Christmas at Beatrice’s home in Rwamujojo.

Herbert hails Tumuhairwe for her timekeeping. “She is a good time-keeper. I do not remember a time when we did not have breakfast on time. She is also hardworking and does not make excuses,” Herbert says.

When the couple was building their Bwebajja home, they catered for Tumuhairwe who, like their children, values privacy and prefers self-contained bedrooms.

When Brenda, one of the Muhumuzas daughters got married early this month,Tumuhairwe was present.

Maid kills boss' child after being threatened with sack

Child has hole on forehead after maid tortures her