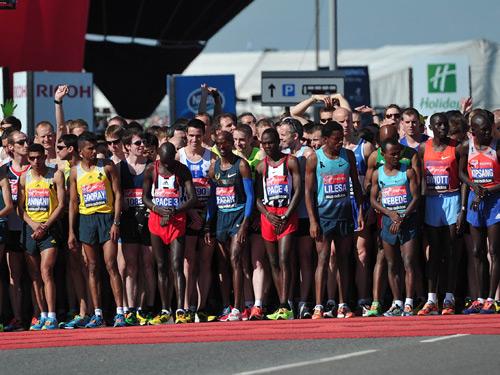 ETHIOPIA's Tsegaye Kebede and Priscah Jeptoo of Kenya triumphed at a sombre London Marathon on Sunday, as runners paid tribute to the victims of the deadly bomb attacks at the Boston Marathon.

Kebede hunted down 2011 champion Emmanuel Mutai to win the men's race, while Jeptoo surged to victory in the women's event, eight months on from her second-place finish at the London Olympics.

Stephen Kiprotich failed to reproduce his Olympic winning form as he settled for sixth position. The pace proved too fast for the Ugandan runner who clocked two hours 08.05.

But even without the winner’s prize, Kiprotich,24, who was only running his fifth marathon, still had cause to smile for a good effort in a race that had big names like world record holder Patrick Makau finishing behind him.

“I need to recover before planning for my next race,” Kiprotich said on phone when asked whether he would feature at the World Championships in August.

Kiprotich kept with the front pack until towards the halfway mark when he started falling behind. But he recovered with a strong finish in the last two kilometers to bag the $7,500 (sh19.2m).

The men's and mass start races were preceded by a 30-second silence in memory of the three people killed and around 180 injured in Monday's bombings in Boston, while competitors donned black ribbons in tribute.

After a frenetic start in the men's race, Mutai led Stanley Biwott, Feyisha Lilesa and Ayele Abshero past the 30-kilometre mark just 10 seconds outside world-record pace.

Biwott tried to force the issue but Mutai resisted his Kenyan countryman's efforts to break clear and found himself in the lead.

However, he began to flag as he approached the Houses of Parliament and Kebede tore past him to cross the line in a time of 2hr 06min 03sec. Mutai trailed in second, with Abshero third.

British Olympic star Mo Farah had helped set the early pace before dropping out, as planned, after an hour.

The 5,000 and 10,000 metres champion at last year's London Games is preparing to compete over the full distance next year, but he said he had struggled with the demands of marathon running.

"The pace is not a problem. The biggest challenge is picking up the right drink and I think I made a mess of it," Farah said.

"I've learnt the biggest lesson of my life, really. If I come here next year and make a mess of it, it'd be hard to deal with, so it's opened my eyes."

Jeptoo, who finished third in last year's race, streaked away from the women's field to claim victory ahead of compatriot Edna Kiplagat and Yukiko Akaba of Japan.

Florence Kiplagat slowly fell back and her namesake Edna could not keep pace with Jeptoo either after the 28-year-old ran the 21st mile in a time of five minutes and 11 seconds.

Jeptoo completed the race's final stages alone and raised her arms in triumph as she crossed the finish line in front of Buckingham Palace in a time of 2hr 20min 15sec.

Australia's Kurt Fearnley took the honours in the men's wheelchair race after pipping Marcel Hug of Switzerland in a sprint for the line.

Britain's David Weir, who was bidding for a seventh London Marathon title, was level with Hug as the leading racers entered the final straight but ultimately finished fifth.

American Tatyana McFadden claimed victory in the women's wheelchair event in a course record time to follow up her success in the equivalent race in Boston.

Earlier, 35,000 runners bowed their heads and observed a moment of reflection in memory of the victims of Monday's devastating twin bomb blasts in Boston.

Organisers have pledged to donate £2 ($3, 2.30 euros) for every finisher to a fund for the Boston victims.

Meanwhile, the police presence along the 26.2-mile (42.2-kilometre) course was increased by 40 percent.

Despite security fears, organisers said 700,000 people took to the streets of London to watch the race on a day of blue skies and bright sunshine in the British capital.

US police arrested one suspect in the Boston bombing on Friday after his brother and fellow suspect was killed in a shootout.