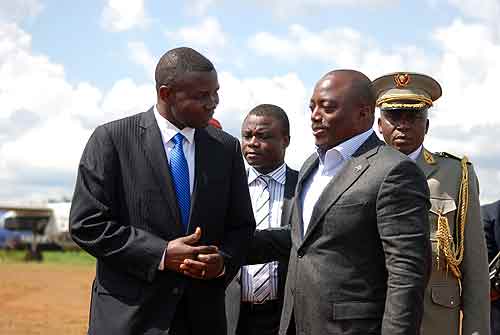 The Congolese army clashed Monday with suspected Ugandan rebels blamed for two massacres in which more than 40 people died in the Democratic Republic of Congo's volatile east, a senior official said.

"There was contact today with rebels of the ADF (Allied Democratic Forces) on the outskirts of the town of Beni, inside the Virunga National Park," the governor of the troubled North Kivu province Julien Paluku told AFP, saying that a hostage had also been freed.

The rebels were "organising themselves" for another possible attack on the town, he said, the scene of two massacres in almost as many weeks.

The fighting ended when night fell, Paluku added, "We couldn't see the enemy... and we risked falling into an ambush."

The freed hostage was being interrogated to find out what the rebels were planning, he said. The military could not be contacted.

As many as 30 people were killed on October 16 with machetes and clubs in a night attack on Beni, a major trading crossroads of half a million people.

And on Saturday night another 11 people were butchered in another attack there, only hours after DR Congo President Joseph Kabila left the town promising to defeat the ADF.

In the past month about as 120 people have died in "successive massacres by the ADF" around Beni, and thousands of families have been forced to flee, the Civil Society of North Kivu group said.

The rebels have been active in the mountainous border region between the two countries since 1995 after being driven out of Uganda by President Yoweri Museveni.

They have been blamed for atrocities, pillaging villages and forcing locals to fight for them, while funding themselves from the lucrative smuggling of wood.

In January, the Congolese army and the United Nations began an offensive against the ADF, the last major group active in the region.

However, the rebels have bounced back since the brutal death in August of Congolese army chief General Jean-Lucien Bahuma.