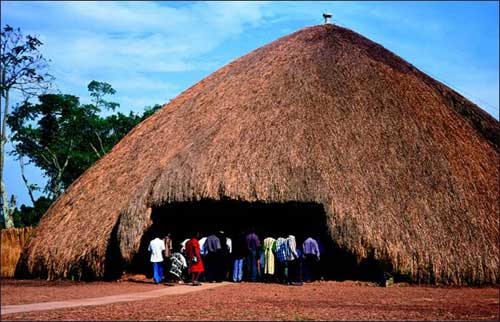 Buganda Government plans to issue a chain of security measures to be fulfilled by anyone before being let to access the Kasubi tombs starting 2014.

The measures are set to boost security at the tombs which were destroyed by fire in March 2010 (pictured right below).

Buganda Government spokesperson Charles Peter Mayiga told New Vision that the measures will be issued during the unveiling of the tombs early 2014.

The reconstruction of Kasubi tombs started in January and Omega Construction is doing the work at a cost of sh2.3bn. Mayiga said a lot of emphasis is now being put on security.

He added that a chain of royal body guards who are in charge of providing security at the tombs have also been retrained and re-equipped for serious security challenges.true

The Kingdom also plans to install fire detectors and fighting equipment in the tombs.

Mayiga said that the fire equipment was donated by the Japanese Kingdom through United Nations Education, and Scientific, Culture Organization (UNESCO) at sh1.2bn for the firefighting gargets.

“The fire equipment will be installed by the Japanese as soon as the reconstruction of the tombs is finished,” Mayiga said.

The budget for the construction of Kasubi tombs is sh10bn and so far, people living in Buganda Kingdom have raised sh850m towards the cause.

The central government contributed sh2b to the project.

People who contribute sh50,000 and above are given certificates while those who give less that amount are given receipts.

People contributing funds can send funds via Mobile Money or take it to Bulange Mengo, the Kingdom’s headquarters.