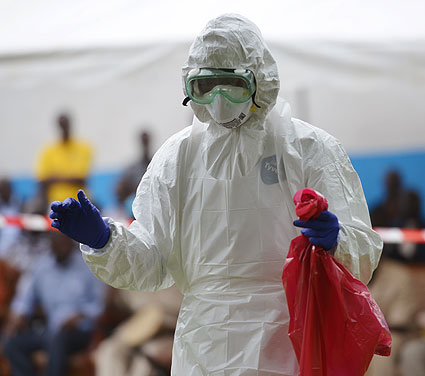 PARIS - A prototype drug that has been urgently given to a handful of patients with Ebola has cleared an important test hurdle, showing that it cured lab monkeys with the disease, scientists said Friday.

Normally, experimental drugs are tested first on animals and then on progressively larger groups of humans to ensure they are safe and effective.

But, in an exceptional move, a new drug called ZMapp that has not gone through these tests has been rushed to the outbreak in west Africa, as the lethal disease has no cure.

Reporting online in the British journal Nature, researchers at the Public Health Agency of Canada said 18 rhesus macaque monkeys given high doses of Ebola virus fully recovered after being given ZMapp, even when it was administered five days after infection.

It reversed dangerous symptoms such as bleeding, rashes and high levels of enzymes in the liver.

Three "control" monkeys that had been infected, but not treated, all died within eight days.

true
An experimental Ebola drug has been used in monkeys, with success

The 21 animals had been given the so-called Kikwit strain of Ebola, named after a location in the Democratic Republic of Congo, the country where the haemorrhagic fever was discovered in 1976.

But lab-dish tests indicate it can also inhibit the strain in Guinea which has sparked the current epidemic, the scientists said.

Independent experts hailed the results as an encouraging first step in the long vetting process.

They added, though, it was still unclear whether ZMapp worked on humans, as two patients who have been given it have died and two others have recovered.

"Widespread availability and use of ZMapp will require human safety testing and licensing, coupled with scaleup of the manufacturing process," cautioned David Evans, a professor of virology at Britain's University of Warwick.

true
The Ebola virus as seen under a microscope

A cocktail of three antibodies designed to cling to the Ebola virus and inhibit its reproduction, ZMapp is being developed by Mapp Biopharmaceutical Inc. of San Diego, California, partly in conjunction with the US Army.

ZMapp has so far been given to seven infected frontline workers.

Of these, two American doctors have recovered; a Liberian doctor and a Spanish priest have died; and a doctor and a nurse, both Liberian, and a British nurse, who has been flown to London from Sierra Leone, are still in treatment.

The World Health Organisation gave the green light on August 12, saying it was ethical to use experimental drugs in the context of this dangerous epidemic.

Stocks of ZMapp, which is derived from tobacco leaves and is hard to produce on a large scale, are exhausted, the company said on August 12.

The other main experimental drug for the disease is TKM-Ebola, being developed by Tekmira Pharmaceuticals Corp. of Vancouver, Canada, under a $140-million (105-million-euro) contract with the Pentagon.

It is currently in a Phase I human trial, the first step in the three-phase test process. In this phase, a drug is evaluated on healthy non-infected humans to see whether it is safe. Further phases test it for safety and also effectiveness.

More than 1,500 people have died in Guinea, Liberia, Nigeria and Sierra Leone since the disease emerged in West Africa last December.