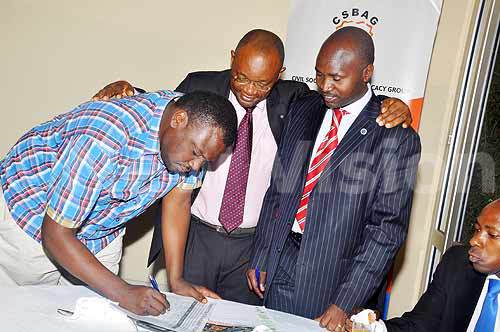 Uganda is at a disadvantaged position in the East African region in that it won’t be able to compete in terms of trade due to tax on agricultural inputs.

“Tanzania and Kenya have subsidized on agricultural inputs and therefore they have the comparative advantage,” Julius Mukunda, the coordinator of Civil Society Budget Advocacy Group (CSBAG) told members of parliament.

“We are not going to compete with Tanzania and Kenya.”

He pointed out that civil society organizations are not against taxes on agriculture but on agricultural inputs as it hurts poor farmers.

The MPs agreed with Mukunda’s remarks and said they will push for the rejection of tax on agricultural inputs.

The minister of finance Maria Kiwanuka in the June 12, Budget Speech slapped taxes on agricultural inputs especially on fertilizers, hoes and pesticides among others and this has drawn outrage by members of the public.

Mukunda informed the lawmakers that suppliers of pesticides are not willing to release the item unless government agrees to sign memorandum of understanding with them to ensure that their interest is catered since there was no tax when they imported.

He said this status is likely to cause black market if it is not handled adequately.

MP Ephraim Biraaro claimed that the tax on agricultural inputs was smuggled in because the original budget which he saw it wasn’t there.

The MPs vowed to intensify with the 1million signature to have tax on agricultural inputs dropped.

“We are not turning back of the petition to the Speaker of Parliament to have taxes on agricultural inputs dropped,” MP Raphael Magezi said.

The MPs are also worried of the classified expenditure saying the Financial Bill should address it.

Lawmaker Muwanga Kivumbi pointed out that 1 trillion is marked in classified expenditure is not good for the country as priority areas like education, health and agriculture sectors are underfunded.

The MPs made remarks during the breakfast meeting organized by CSBAG at Golf Course Hotel in Kampala.