THE Department of Inspection and Legal Services, Ministry of Internal Affairs has arrested 38 foreigners, including traders illegally operating their businesses in Uganda

THE Department of Inspection and Legal Services, Ministry of Internal Affairs has arrested 38 foreigners, including traders illegally operating their businesses in Uganda

THE Department of Inspection and Legal Services, Ministry of Internal Affairs has arrested 38 foreigners, including traders illegally operating their businesses in Uganda.

Addressing the press at the Ministry of Internal Affairs premises, Simon Peter Mundenyi, a senior immigration officer said the arrests were made in routine inspections, after months investigating the suspects for illegal stay and working without permit.

Most of the foreigners arrested operate small and median sized shops for household items. Others operate supermarkets, while some work in industries.

Undercover inspection officials even had shopping in facilities of some of the very people they arrested.

“Usually, we would go to their shops and work places in uniforms and officials vehicles but they hide and elude arrest. This time around, we went in plain clothes and private cars and busted them,” narrated Mundenyi.

Dozens of the people arrested were released within hours, but more than a dozen face deportation for immigration violations. Those who presented sureties were let go on immigration bond, while the rest were detained pending further investigations into their cases.

Officials say Immigration and Inspections agents rounded up 38 people at 3 locations in three day. Most of those arrested were Chinese nationals, while the rest comprised Indians, Pakistanis, Somalis and a Nigerian.

The first operation on Tuesday in down town Kampala saw one person, a Chinese, Li Zhu arrested. 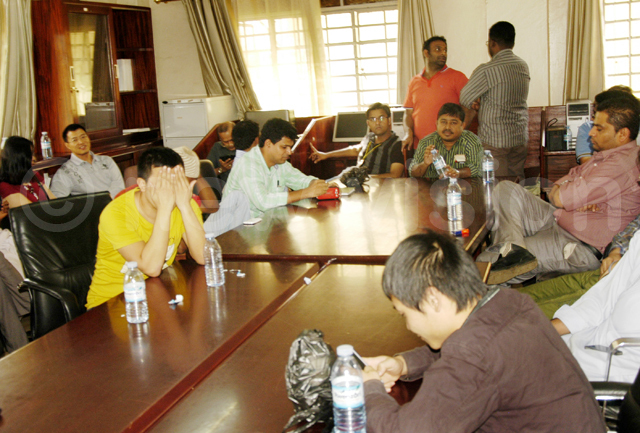 Some of the suspected illegal immigrants of Asian origin held at Ministry of Internal Affairs, Immigration department after the operation. Photo by Ronnie Kijjambu

By press time, the rest of those arrested were still detained in police stations around Kampala.

Mundenyi said they targeted undocumented workers who were running businesses illegally and those whose visa had expired. Some had entered the country as tourist but now run their own businesses, or work in industries without permits.

Some travelled to Uganda for short visits, but have since lived on, sometimes three months after elapse of their official stay here.

Mundenyi however noted that, some of those arrested could have already renewed their visa, pending endorsement by ministry of internal affairs. Such persons, he noted would be released.

However, those who are working without work permits will be deported after paying a fine of $100 a day for illegal stay in Uganda. Some will be arraigned in court for immigration violation, before eventual deportation.

By press time, the commissioner for Inspection and Legal service was yet to determine the fate of the 38. Last year, Uganda deported 329 foreigners out of 1,114 arrests.