MENU
Thanks to Baganda, we have kanzus, kwanjula
Previous Story

The First Lady who dared to replace her hu...
Next Story

Karamoja no longer a raid-prone region thanks to Janet

To mark 50 years of Uganda’s independence, New Vision will, until October 9, 2012, be publishing highlights of events and pro ling personalities who have shaped the history of this country. Today, JOSHUA KATO brings you Janet Museveni, with excerpts and pictures from her book, My Life’s Journey

“I had never in my wildest dreams imagined that my husband would become President of Uganda. My husband being President put me in the unlikely position of being First Lady. That is one position I had never aspired to or even dreamt of…,” says First Lady Janet Kataha Museveni in her book, My Life’s Journey.

Of all wives of Uganda’s presidents, Janet Museveni is no doubt the one who has taken the responsibility of the office of the First Lady to another level.

The responsibility of this office is hard to quantify since it has no explicit power, no budget and no formal job description. Its success and power is, therefore, derived from the charisma of the holder and her ability to curve out her role outside just entertaining dignitaries at State House. It is such charisma and roles that bring the offi ce to the ordinary person that sets Janet apart from the other previous First Ladies Uganda has had.

CONTRIBUTION TO THE NATION

Charity work
Janet’s contribution to the nation spans from her involvement in charity work right up to national politics. Her national impact was felt right from the day she set foot in State House in 1986.

Having a soft heart for the suffering and perhaps her turbulent childhood, Janet immediately founded the Uganda Women’s Effort to Save Orphans (UWESO), an indigenous non-governmental organisation (NGO), which cares for war-related and HIV/AIDS-affected orphans across the country.

The NGO has been in operation since 1986 and works closely with international agencies. In her own words, UWESO was born out of a visit she undertook to Naluvule in Luwero. The place was a collection centre for orphans of the NRA liberation war.

“When I saw the hundreds of orphans living in such dire conditions and yet they were singing songs, waving and smiling at me, I felt my heart ache at the sheer scale of our predicament….What would I possibly do to help these children?” Janet wondered. In the next weeks, she invited hundreds of women for a meeting in Naguru and it was through these discussions that UWESO was born.

After UWESO, the First Lady founded and is patron of National Strategy for the Advancement of Rural Women in Uganda (NSARWU), an indigenous NGO which works with poor rural women to empower them economically through various interventions.

To cater for the youth, Janet started the Uganda Youth Forum (UYF), another NGO that engages the youth in character and behaviour change particularly in regard to HIV and AIDS prevention. This NGO was founded about a decade ago. She is still the patron.

Janet is also the patron of the Safe Motherhood Initiative of the Ministry of Health and World Health Organisation for reduction of maternal mortality and morbidity. She is co-chair of CURE Hospital, a special hospital for crippled children in Uganda, with CURE International and an active member of OAFLA, an organisation that unites the First Ladies of Africa in the fi ght against HIV and AIDS in the region.

Janet the politician
A professed and an active Christian whose work and life is driven by faith, Janet remained out of politics until 2006. In her book, she says her request to join active politics was always vetoed by her husband until an opportune moment came.

Ruhaama was not easy. Because her requests to contest had been vetoed several times, a committee chaired by NRM vice-chairman Alhajji Moses Kigongo later gave a green light. However, Janet believed that she was following God’s call and finally, President Yoweri Museveni accepted her stand.

She stood and won by a landslide against the then incumbent and her main challenger Augustine Ruzindana. She was re-elected in 2011.

Janet fi rst served as state minister before Karamoja affairs was elevated to full ministerial portfolio last year. As the minister responsible for this harsh and famine-prone region, Janet has come up with strategies that have greatly improved food security.

At least 6,184 acres of farm land in Karamoja has been cleared and the communities supplied with a variety of seeds to ensure food security in the region. This is in addition to 2,312 acres of gardens ploughed and a variety of crops planted during the 2009/2010 fi nancial year.

She has helped to construct permanent iron-roofed houses in many parts of Karamoja, a move away from the grassthatched huts. One good example is the Nanduget modern village.

Her physical presence has turned the region from one bedeviled by cattle raids to one that is safe for the people to carry out other forms of economic activities. There has not been a major cattle raid in Karamoja since she took over the Karamoja ministerial portfolio. 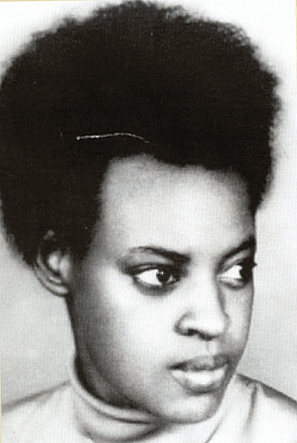 Janet was born on June 24, 1948 in Irenga village, Ntungamo, south-western Uganda. In her book, My Life’s Journey, she describes the area as hilly and beautiful, green all year round and cool.

Janet was the sixth born of Edward Kataha, a gombolola chief, and Erina Kyaremeera. However, four of Janet’s siblings died. On top of being a local government offi cer, Janet’s father was also a cattle keeper. Janet liked the cattle too. However, turbulence set in when her father died. She was only seven years old. This turned the responsibility of bringing her up to her mother Erina.

Education
Janet started kindergarten at Bwongyera before moving to Kitunga Girls for early education and then Kyamate Girls Primary School in Ntungamo. In Primary Four, she joined Bujaga Primary and then back to Kyamate, this time in the larger primary school that Yoweri Museveni too attended. She then moved to Rwamanyonyi Primary School in P6.

In 1961, she was admitted to Bweranyangi Girls in Bushenyi. It was the only all girls secondary school in Ankole at the time. Towards the end of her secondary education, an opportunity came for 20 girls from the school to study nursing at Mulago Hospital. She was aged 15 years at the time. After a year of acquainting herself with treating patients, she moved on.

She started work at Entebbe International Airport as a ground stewardess as she lived in Entebbe with her brother, Henry Kainerugaba. She later worked with the East African Airways. However, tragedy struck when Kainerugaba died in a motor accident. She went back to school, this time at Harlech College in North Wales in 1970.

While in exile in Sweden, she did a diploma in early childhood development and later completed a bachelor’s degree in education from Makerere University (1995-1997).

How she met Museveni 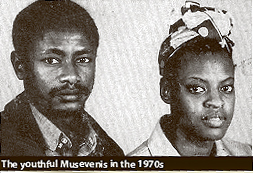 In the foreword to Janet’s memoirs My Life’s Journey, President Yoweri Museveni narrates how he met the First Lady. “I knew her well because we were born in the same sub-county, Ntungamo.

Although my family was traditional and quasinomadic, we were rotating at the time in that one sub-county, Ntungamo. We would shift our kraal from Enkondo to Kirigime, from Kirigime to Kafunjo and so on, but all in the same subcounty,” he writes.

He goes further, “Although Janet was moving around with her parents in the Local Government service, we knew each other quite well. In 1958 when I was in Primary Six, she came to study at Kyamate Girls School, just across from Kyamate Boys School, which I attended. She was three years behind me in Primary Three.

We would occasionally walk home together, I would branch off to my home and she would continue on her way to her home at Irenga”. Museveni says after several years of not seeing each other, they met again in 1969.

“Our paths crossed again briefl y in 1969 when I was returning from a journalists’ conference in North Korea, which student leaders and freedom fi ghters also attended. We met at Entebbe International Airport where she was working.

As God’s miracles go, by 1973 we were married and by April 1974, we welcomed our fi rst born child, Muhoozi Kainerugaba, into the world. Janet is now the mother of four grown up children, Muhoozi Kainerugaba, Natasha Nyinacwende, Patience Kokundeka and Diana Kyaremera. The President describes the First Lady as a person with stamina.

Exile years
They got married in London, in exile and stayed there until 1979 when Amin was overthrown. Janet describes her life in a small hotel room in Tanzania as diffi cult, but very contenting since she was with the man she loved. “We were booked into one small double-room at the end of a dark corridor. That small room, though not much, was fi lled with much happiness and contentment,” she remembers.

It was in Tanzania that Janet started ‘dealing’ or taking part in Museveni’s adventures. At times, she had to look after some of Museveni’s fi ghters in Tanzania. “Our home did not stay empty for long because we started receiving young recruits for FRONASA (Museveni’s rebel group),” Janet recounts.

But they did not have money. Janet decided to start making marmalade for sale. “I marketed my product in one of the supermarkets in town. They liked it so much that they started driving to my house to pick up jars of marmalade every week,” she recalls.

It was the earnings from the marmalade that helped her book for the delivery of her fi rst child at a private hospital. The baby, born in 1974 at 6:00am, was named Muhoozi, now a colonel in the UPDF.

The exile saw the couple live in Moshi, in a small house when Museveni was teaching in Moshi. They later moved back to Dar-es-Salaam and when President Idi Amin was overthrown, they returned home. Uniquely, the Musevenis conceived and got all their fi rst three children in exile.

It was only Diana who was conceived here in 1979, but born in the UK. When Museveni went to the bush again, Janet and the four children had to go into exile again. They lived in Kenya and later in Sweden until Museveni captured power in 1986.

Karamoja no longer a raid-prone region thanks to Janet