First Ladies who shunned the Limelight
Next Story

The First Lady who dared to replace her husband

Today, JOSHUA KATO revisits the archives and brings you the role that, as First Lady, Miria Kalule Obote played in shaping the state of a airs in Uganda and the contribution she played as wife to a head of state who was deposed twice by his own army commanders

In 2006, Uganda’s political scene achieved another milestone. The first-ever woman to contest for the presidency of this country was nominated. The woman, who had just clocked 70 years, was none other than Miria Obote, the widow of former President Milton Obote. But even after she ‘retired’ from politics in 2010, she is still a relevant ‘First Lady’, if a recent meeting between her and President Yoweri Museveni qualifi es as an example.

It is not clear how Obote and Miria met, but at the time, Miria was working at the Uganda Embassy in New York when she returned to marry the young, dashing Prime Minister of the newly-independent Uganda, in November 1963. Obote had just become the first Executive Prime Minister of Uganda, while Sir Edward Mutesa was the President. 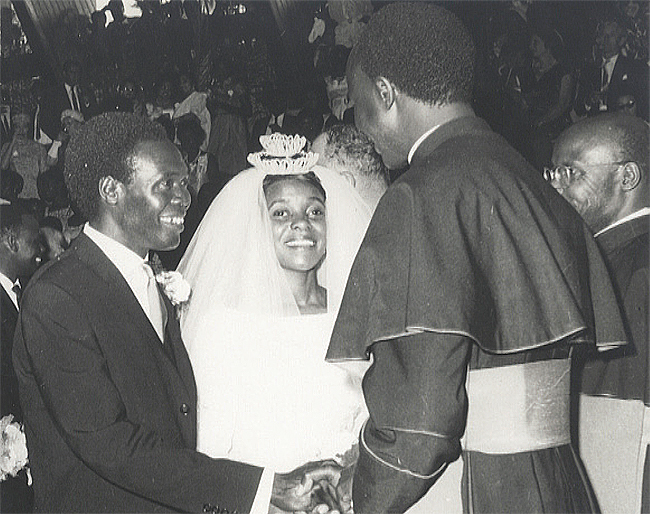 “She was beautiful. She walked like a model,” one of the people who knew and saw her in the 1960s described her in a story that was featured in a regional entertainment magazine. One of her 1960s photos shows her in a knee-high white dress that had straps on the shoulders.

The wedding was lavish; it was the talk of the country because this was the fi rst time a sitting Prime Minister was wedding. On the other hand, it was a big ‘victory’ for Obote. This is because by marrying a Muganda, Obote cemented his political matrimony with Buganda Kingdom and its Kabaka Yekka political party, with which they had just struck a political alliance. 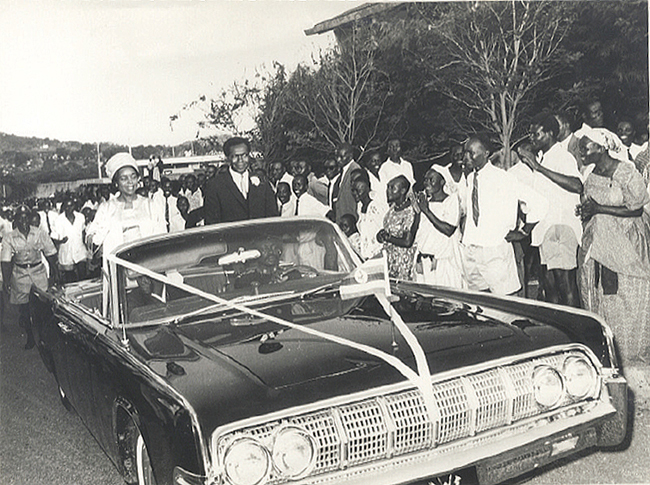 State House and two exiles
“Once you are married to a politician, you get interested in politics, but as an observer. I watched what was taking place, but I had no say,” Miria said, during a media interview in 2006. She dutifully started playing the role of ‘First Lady’ by escorting her husband to national functions and holding offi cial and unoffi cial functions at State House.

However, while she enjoyed her status, the politics in the country was not in her husband’s favour. In 1971, Obote was deposed by Idi Amin. At the time, Obote was away in Singapore, while the family was in Uganda.

“I was caught between staying here and going away to wherever the President (Milton Obote) was. I did not think that the new dispensation would take care of us,” Miria said in 2005.

Although Amin had promised to look after the family ‘very well’, Miria and Obote did not agree. The family was sneaked out of the country a few weeks later, only to be tricked back into returning.

The escape was not easy and Obote described it in one of his statements in 1991. “After constant harassment from January 1971, they escaped to Nairobi with the intention of going to Dar-es-Salaam. Miria tactfully sent the children ahead, to avoid any suspicion. In Nairobi, they reported their presence to the authorities,” Obote wrote.

It is said on discovering that Miria and Obote’s children were no longer at the Kololo house, Amin contacted Kenya’s president Jomo Kenyatta and requested for the Obotes return to Uganda in case they were in Kenya. Kenyatta compelled Amin to promise that no harm would be done to the Obotes when they returned.

“It was the promise of a liar and murderer. Amin personally went to Tororo and instructed the Police commander there to send my family to Lira when they got to Tororo,” Obote wrote.

Unknown to Amin was that before January 25, 1971, the Police offi cer he spoke with in Tororo was a member of Obote’s escort unit. When the family arrived at Malaba, the Police officer did direct them towards Lira.

They, therefore, proceeded to Kampala where days later, Amin subjected the children, the youngest of whom was only four years old, to TV studio interrogations asking them whether they wanted to join their father in exile. The episode was recorded and later televised.

There is a belief that had the family taken the road to Lira, they would have been murdered either on the way or in Lira. It is alleged that after they had left Malaba armed men were dispatched on the Tororo-Mbale- Soroti road.

“Two days later, the five men when in Lira went from house to house harassing and mistreating my relatives and friends that they were looking for my family to take back to Kampala to meet the President. Later, however, these men discovered that the Obotes were already in Kampala,” wrote Obote. “Days later, the children went to Dar-er-Salaam to meet their father,” says Miria. However, she stayed at Kawempe until it became unbearable for her. She organised her escape a month later, to Dar-es-Salaam through Nairobi.

Second exile
In 1980, Obote returned to Uganda as President. This meant that Miria Obote was back in State House as the First Lady. But again, this term too was not smooth as Obote was under immense pressure, some of which was from his soldiers. “I was watching all these things and I have to say the President was doing a lot to fi nd solutions. I watched him all the time and I know he was a very genuine person,” Miria said.

Obote was again overthrown on July 25, 1985 and this time round, Miria was again the silent victim of her husband’s problems, after mainly Acholi soldiers in the Uganda National Liberation Army (UNLA) overthrew Obote. Miria then started her second exile.

This time, the family did not go to Tanzania, but instead to Zambia. At the time of the coup, however, Miria had led a Ugandan delegation to a UN women’s conference in Nairobi. There were rumours that Miria had separated with Obote when the second overthrow happened, a rumour Miria denied when she returned in October 2005.

She said she remained loyal to Obote until his last hour. Obote died on October 10, 2005. Miria returned with his body. In her own words, she described the exile period as very ‘diffi cult’. “There is nothing as beautiful as staying in your home, near your loved ones,” she said.

At the time, she had returned to bury her husband, only to be ‘thrown’ into the murky world of politics. About a month after returning, Miria became the fi rst woman to head a major political party in Uganda.

On November 28, 2005, UPC elected her as party leader and fl ag-bearer in the 2006 general election, making her the fi rst woman to lead a major political party in Uganda and contest for presidency. “Miria is a mother and hope of this nation,” Joseph Ochieno one of her campaigners used to say. She, however, only garnered 0.6% of the votes cast.

But even then, Maama Miria as her supporters fondly referred to her had scripted her name in Uganda’s now 50-year-old history-as the fi rst woman to successfully go through a presidential election. In 2011, Betty Kamya followed in her footsteps.

The First Lady who dared to replace her husband