Malawi's President Bingu wa Mutharika, 78, was unconscious in hospital after suffering a heart attack Thursday, amid mounting discontent with his leadership and demands for his resignation.

"He had a cardiac arrest, he is still unconscious since 9:00 am," a senior official at Kamuzu Central Hospital in Lilongwe said on condition of anonymity.

According to the source, Mutharika collapsed at his official residence and was rushed to hospital in an ambulance. He is currently being treated at an intensive care unit and his condition has been described as critical.
He has been visited by senior politicians from his cabinet, including his wife and children.
"Those who visited the president in the intensive care unit included his brother Peter Mutharika, the First Lady Callista, his daughter Duwa and the chief secretary to the president, Bright Msaka," the source said.
Energy and Environmental Minister Goodall Gondwe also visited the president.
Mutharika, a former World Bank economist, was re-elected with a sweeping majority in 2009 as president of the poor southern African country.
But his second term has been marred by anti-government protests, with activists accusing him of mismanaging the economy and trampling on democratic freedoms.
Two weeks ago he vowed to govern until his term ends in 2014 after a leading rights group threatened unrest if he did not resign or call a referendum on his leadership.
"I would like to say that Bingu doesn't run away from work, Bingu doesn't desert responsibility even if the going gets tough," he told a rally. 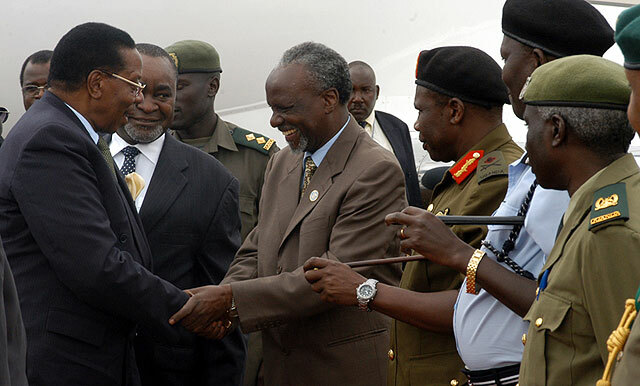 Malawian president Bingu wa Mutharika greets State Minister for the Presidency Kirunda Kivejinjah and Ugandan security officers at Entebbe airport on August 6,2004
Last month, the Public Affairs Committee (PAC), made up of religious groups, rights activists and the opposition, demanded that Mutharika quit office or call the referendum within three months.
The group accused him of mismanaging the economy and trampling on democratic freedoms, saying the country was bordering on a failed state.
Critics have lambasted new laws to restrain the media, limit protests, and restrict lawsuits against the government.
Political tensions erupted into rioting in July, when police shot 19 people dead.
Ahead of the riots, alarmed by his restrictions on political freedoms, donors had already begun suspending aid, with former colonial power Britain slashing its financial support.
The leader presided over steady economic growth but has struggled to manage foreign currency reserves, which have also been hit by a drop in earnings from the country's main export tobacco.
His refusal to listen to criticism, whether from civil society or the International Monetary Fund, has earned him the moniker 'Mr. Know-it-All'.
Reuters

I was not beaten - Nambooze