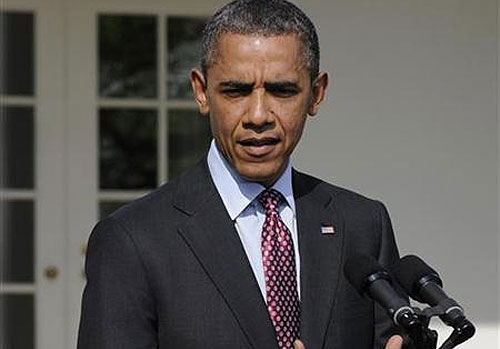 WASHINGTON/SANFORD, Fla. - President Barack Obama weighed into the controversial killing of a black teenager in Florida in very personal terms on Friday, comparing the boy to a son he doesn't have and calling for American "soul searching" over how the incident occurred.

Seventeen-year-old Trayvon Martin, dressed in a "hoodie" hooded sweatshirt, was shot dead a month ago in Sanford, Florida by a 28-year-old white Hispanic neighborhood watch volunteer who said he was acting in self-defense.

"If I had a son, he'd look like Trayvon," Obama said in his first comments about the shooting, acknowledging the racial element in the case.

"Obviously, this is a tragedy," Obama told reporters. "I can only imagine what these parents are going through. And when I think about this boy, I think about my own kids."

The case has galvanized the nation and prompted rallies protesting the failure of police to arrest the shooter, George Zimmerman, and more broadly, a pattern of racial discrimination that black leaders cite in Sanford and elsewhere in the country.

Obama, the first black U.S. president, made his remarks at a White House event to announce his pick to lead the World Bank, waiting briefly after the announcement to take a reporter's question about the incident.

Martin's parents thanked the president for his words.

"The president's personal comments touched us deeply and made us wonder: If his son looked like Trayvon and wore a hoodie, would he be suspicious too?" they said in a statement.

Florida's "Stand Your Ground" law allows people to use deadly force in self-defense.

Similar laws are in effect in at least 24 states including Florida, according to the Brady Campaign to Prevent Gun Violence. Calls are mounting to repeal them. Earlier this week, a Florida state senator said he was drafting new legislation to drastically change the law in Florida.

A South Carolina state representative said on Friday he had introduced a bill to repeal his state's law.

Bakari Sellers, a black Democrat and gun owner, said he wanted to prevent an incident like the Trayvon Martin shooting happening in his state. "I'm six-five and a black guy," he said. "I just know that it could have been me."

Obama said the "Stand Your Ground" laws should be studied.

"I think all of us have to do some soul-searching to figure out how does something like this happen. And that means that we examine the laws and the context for what happened, as well as the specifics of the incident," he said.

"Every parent in America should be able to understand why it is absolutely imperative that we investigate every aspect of this, and that everybody pulls together - federal, state and local - to figure out exactly how this tragedy happened."

Obama, the son of a white mother from Kansas and black father from Kenya, does not comment frequently on race, a sensitive topic in the United States, which still grapples with a legacy of slavery, segregation and discrimination.

Early in his White House tenure, Obama inflamed another racially tinged incident by declaring police had "acted stupidly" when arresting a well-known black documentary filmmaker, Henry Louis Gates, after an altercation at his home.

Obama later invited Gates and the white police officer, Sergeant James Crowley, to the White House, where the men shared a drink in what became known as the "beer summit."

In Sanford, Norton Bonaparte Jr., the city's manager, acknowledged tensions between the black community and police "go back many, many years."

"The trust that existed is gone, so we have to start from ground zero," he said.

Sanford's police chief and a Florida state prosecutor overseeing the case stepped aside on Thursday as criticism grew over police handling of the investigation.

The U.S. Justice Department is also investigating. Senior officials from the department met with the Martin family in Florida on Thursday, along with their lawyer.

A Justice Department spokeswoman said early in the week that they must collect evidence to prove beyond a reasonable doubt that there was or was not intent to violate civil rights laws.

And a Florida college announced it had suspended Zimmerman's enrollment.

Zimmerman was working toward an associates degree in arts at Seminole State College in Sanford. He previously earned a vocational certificate in an insurance field, the school said.

"Due to the highly charged and high-profile controversy involving this student, Seminole State has taken the unusual but necessary step this week to withdraw Mr. Zimmerman from enrollment," a statement dated Thursday said.

Zimmerman has not commented publicly about the shooting and his whereabouts are unknown. His father has said he is being unfairly vilified.

On Friday, Florida court records reviewed by Reuters showed Zimmerman was involved in at least two previous legal incidents, including a 2005 domestic violence case with his former fiancee.

Zimmerman, who at the time worked at an insurance agency, and his ex-fiance both sought restraining orders against each other after getting into a pushing match. In her complaint, Veronica Zuazo said the two had been involved in two physical fights in 2002 and 2003.

Zimmerman was also arrested and charged with resisting a law enforcement officer with violence in 2005. The case was eventually dropped after he completed a program to avoid being formally charged.