Masulita's cry for water, one borehole ser...
Next Story

Despite growing international attention to global safe-water access, investment in such products and services in developing countries remains low. The shortage of drinking water has prompted cries of crisis in rural areas where the population are at a risk of getting water-borne diseases.

As a solution, a number of interventions have been to ensure water is safe for drinking for the population, according to Paul Kimera, the research officer with Appropriate Technology Center for Water and Sanitation.
“Now with the escalating costs of fuel, the cost of boiling water on a routine basis is becoming more expensive and posing an increasing danger to our environment,”he says.

There are now different ways water can be purified to make it safe for drinking.

Chlorination
This is a method that uses chlorine purifiers to kill the germs and make water safe for drinking. Chlorine tablets fizzle in the water and there is no need to shake them. There are also sachets that cause the dirty water components to coagulate and settle at the bottom. Chlorine also comes in liquid form. Chlorine plays the major role of killing the bacteria in the water. However, the water remains looking dirty and therefore may not change the perception of the consumers.

Membrane filters/life straw
A Life Straw is a water filter designed to filter water for safe drinking for one person. The straw can be used to drink water from a dirty source. It removes 99% of waterborne bacteria and 99.9% of parasites. It filters a maximum of 1,000 liters of water, enough for one person for one year. The Life Straw Family, a larger unit designed for family use, also filters out 99.99% of viruses.

Solar disinfection
Solar water disinfection, also known as SODIS is a method of disinfecting water using only sunlight and plastic bottles. SODIS is a free and effective method for decentralised water treatment, usually applied at the household level and is recommended by the World Health Organisation as a viable method for household water treatment and safe storage. Exposure to sunlight has been shown to deactivate diarrhea-causing organisms in polluted drinking water.

The method could be used in disaster relief or refugee camps. However, getting the right clean bottles may be more difficult than providing equivalent disinfecting tablets. In some circumstances, it may be difficult to guarantee that the water will be left in the sun for the necessary time to kill the germs.

Bio-sand filters
Where developed countries use the ozone layer to purify water, in Uganda we use the bio-sand filter. The house bio-sand filter was first conceptualised by Dr. David Manz in the late 1980s. This is a filtration system developed from sand filters, which remove pathogens and suspended solids from water.

Compared to other systems such as chlorination or solar disinfection, it is easier to operate, less expensive, which makes it a good alternative, especially in developing countries.

Bio-sand filters are typically constructed from either concrete or plastic. Even though the most widely used are from concrete, smaller plastic versions are invented to make them more user-friendly and portable. Bio-sand filters consist of similar components. At the top of the filter there is a tightly fitted lid, which prevents contamination and unwanted pests from entering. Below is a plate, which prevents disturbance of the filtration sand layer and protects the bio-layer when water is poured into the filter.

The sand layer
Pathogens (germs) and suspended solids are removed through a combination of biological and physical processes that take place in the bio-layer and within the sand layer.

“Scientists have proved the filtration method and have concluded that it works though research is ongoing to find out the chronological process leading to its success,” says Kimera. Bio-sand filters remove pathogens and suspended solids through a combination of biological and physical processes that take place in the bio-layer and within the sand column.
Different processes occur during different points in the filter running process.

These can be broken down into segments of the filter running process. Pathogens are consumed by other micro-organisms in the bio-layer. Germs then become attached to each other with  suspended solids in the water and the sand grains. Another school of thought is that the pathogens finish their life cycle or die because there is not enough food or oxygen for them to survive during the filtration process.

Bio-sand filters have been shown to remove 5 to 64.% of heavy metals, above 90% of turbidity and contaminants such as bacteria, viruses and protozoa. They also help to reduce discoloration, odour and unpleasant taste. 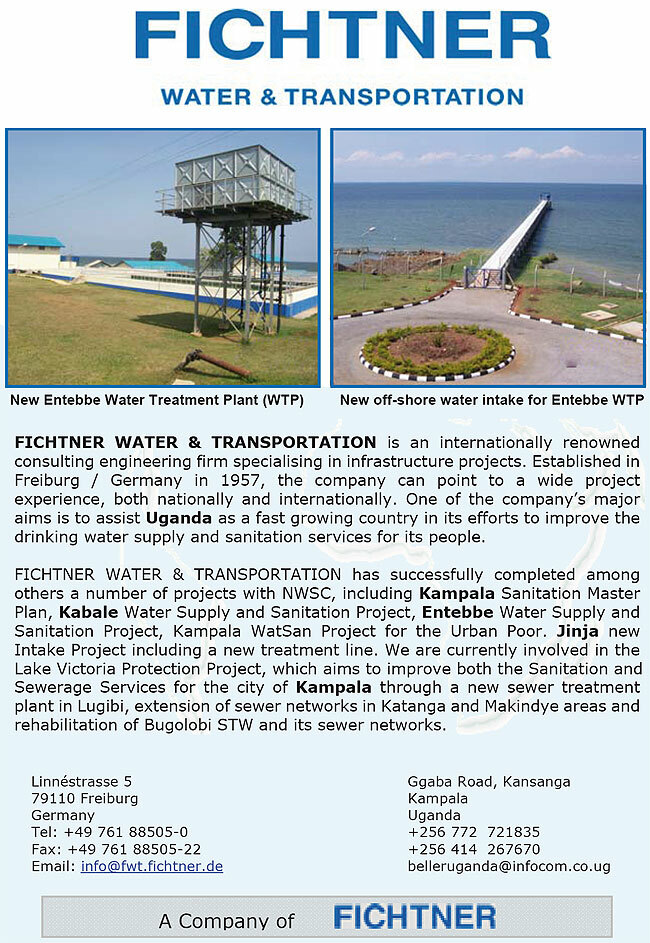