Attaining a state scholarship at university remains every S.6 leaver’s dream. However, this dream has eluded many over the years.

Attaining a state scholarship at university remains every S.6 leaver’s dream. However, this dream has eluded many over the years.

Attaining a state scholarship at university remains every S.6  leaver’s dream. However, this dream has eluded many over the years.

And this year it may even get harder as the  number of candidates eligible for admission to universities and other tertiary institutions has increased due to increased performance.  There is an increase of 3,894 candidates competing for university slots on government and private admission in both state and privately-owned universities.
How you calculate your points could make a difference; ignorance could easily cost you your dream career.  Considering the trend of A-level results over the years, best performing schools continue to have most of their candidates getting above 18 points.  In the past, most students with 18 points and above in sciences were admitted on the highly competitive state-sponsored scheme.

Over the years, the competition to acquire higher education has continued to be stiff. Although the regulations stipulate that any candidate who gets two principle passes qualifies for university education, it is now very hard to join a competitive course with only two principles passes.

Competition for the 4,000 government-sponsored slots is expected to be even higher this year. And this will be the same for the private sponsorship scheme with capacity of 30,000 for all the 25 universities. The Government sponsors 4,000 students in public universities. Of these, 3,000 are selected on academic merit, while 75% are admitted to science courses and 25% to arts and humanities.

The state scholarships are only attainable in five public universities, with Makerere taking 1,800 scholarships; Kyambogo (700), Mbarara (300), Gulu (200) and the newly-established Busitema University in Busia, 100.  The remaining 800 places are filled on the district quota system introduced four years ago.

Each district is given 10 slots. The university quota system was introduced in 2005 with the aim to offer university education to brilliant students who have failed to access it.  The other objective is to give an opportunity to disadvantaged districts that have failed to send students to the universities.

Despite the increase in cut-off points over the years, the weighting system has not changed.  In fact the number of students who sit for A’ level increases every year, which has increased competition for the limited places in public universities.
The technicalities involved in A’ level rankings and weighting are far more complex. The way science subjects are weighted is different from that of arts. The situation is further complicated by the fact that some subjects are divided into three papers and others two.

Weighting system
A computerised weighting system is used. The points depend on the number of applicants per course and the capacity of the faculties.  Under the weighting criteria, all subjects taken at A’ level are grouped into four categories; essential, relevant, desirable and others.

For a given candidate, not more than three subjects taken at principle level-shall carry a weight of three, two or one. Principal subjects in excess of three shall be designated as others and weighed at 0.5.  Not more than two subjects are designated as essential.  A pass in a subject taken at subsidiary level such as General Paper carries one point.  For example, if the cut-off points for Law was 50. Candidate X scored AABB in Literature, Economics, History and Luganda. She also got a distinction in General Paper. At A’ level, A carries six points, B five, C-four, D-three, E-two and O-one.

Assuming the first two subjects are essential for Law, the third relevant and the fourth desirable, his weight would be calculated as follows:

NB: O’level marks also account for university entry. A distinction is weighed at 0.3, while credits are rated at 0.2. Female students are also added 1.5 points.

The minimum entry requirement to a university is two principle passes. However, this may not guarantee automatic entry due to limited places. 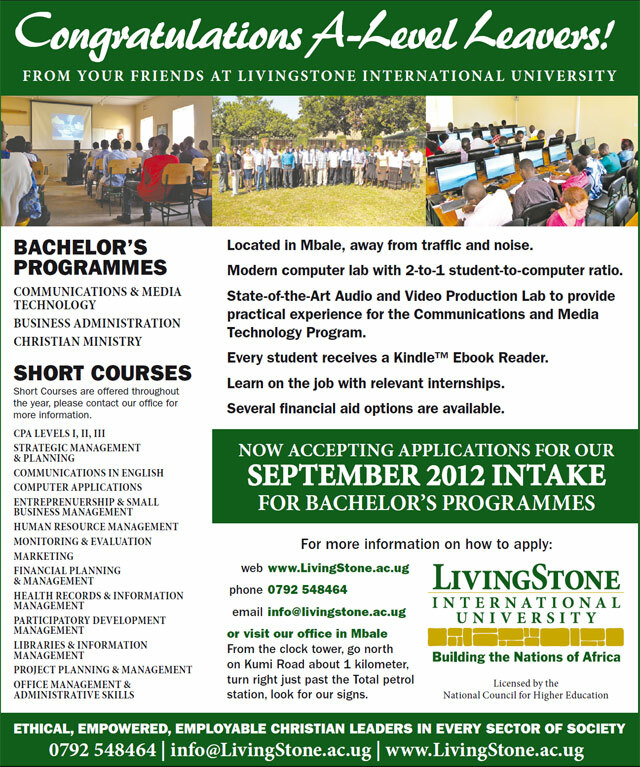 All set for Toto Christmas Festival 2019