It is dangerous to keep people in election...
Next Story

The Office of the Prime Minister will lead and coordinate the response with aspects such as health handled by the Ministry of Health; nutrition by Ministry of Disaster Preparedness; hygiene and water supply by Minister of Water and Environment; and finance by Ministry of Finance.

Other sectors and partners will be identified and requested to deal with situation and conditions within their mandate and areas of competence.

The Nodding Syndrome that started in 2009 in Kitgum, Lamwo and Pader district has so affected over 3,000 children aged between five and 15 years with 170 deaths.

Most of the affected children are males and live in areas where Onchocerciasis (River Blindness) is prevalent.

Although the disease does not meet WHO criteria of “emergency”, it has, however, aroused a huge public outcry in Uganda in the recent past resulting in more political and health sector attention because of the related disability it causes.

The presentation of the disease suggests that this is possibly a new type of seizure disorder characterised by head nodding episodes that consist of repetitive dropping forward of the head.

The nodding is sometimes precipitated by food or cold weather and is often accompanied by other types of seizures or staring spells.

During the episodes, the child stops feeding and appears non-responsive, with or without loss of consciousness.

There is deterioration of brain function in some of the victims, and malnutrition with growth retardation in the majority of cases Children become malnourished and have dropped out of school. Investigations reveal the disease is not contagious.

Similar cases have been identified in Tanzania in 1962, Liberia in 1983, and Southern Sudan in 2003. To date, no definite cause or cure for the diseases has been found. 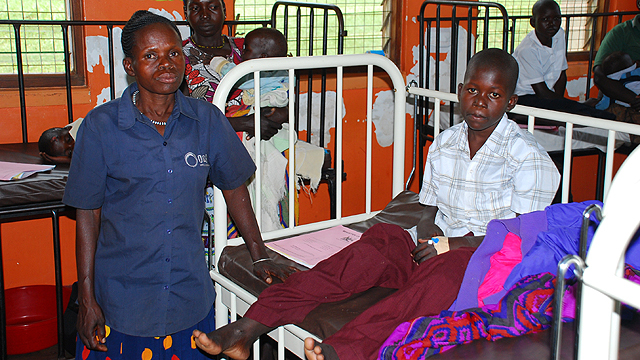 Dr. Hellen Aanya a paediatrician at the ward says the condition of the children has improved over the past few days. Photo by Nicholas Kajoba

Since 2009, the Ministry of Health, WHO Center for Disease Control and other partners have conducted epidemiological investigations that provided the information currently known about the disease.

These investigations enabled exclusion of a number of possible infectious, toxic, or nutritional factors, but the cause of the illness still remains unclear. Health experts think Nodding Syndrome could be associated with Onchocerciasis but this still requires further investigations.

One other significant finding is a deficiency of vitamin B6 in most of the affected children and other micronutrients (Vitamin A, Seleniun and Zinc).

However, these deficiencies were also present to a big extent in children in the same area without Nodding Syndrome. The good news is that patients can be effectively treated with the anti- drugs that are currently available in the country.

In the health sector, the Ministry of Health, WHO and partners have developed a response plan based on available information.

The components of the plan are case management; bi-annual mass treatment of Onchocerciasis with Ivermectin; strengthening surveillance; multivitamin and multi-nutrient supplementation; and research into the cause of the disease.

The Ministry of Health, in collaboration with CDC, WHO, Makerere and Gulu Universities, among other partners is conducting research in various aspects of the nodding syndrome, and more research is still planned.

In the meantime, the Ministry of Health has set up treatment centres in the three districts and is training health workers in

the management and treatment of cases  Village health teams are helping with community surveillance, identification and follow-up of cases. The involvement of the Office of the Prime Minster (OPM) and other sectors in the response is expected to energize and reinforce these efforts.

To begin with, the OPM has provided 600 bags of fortified foods, 400 bags of ordinary food and 100 bags of beans for the affected households.

These and other items will be distributed by the Uganda Red Cross and other community-based NGOs in the affected districts.

The writer is the Minister of Health