FROM the Bugiri-Malaba highway, Bugiri hospital appears to be a deserted facility.

FROM the Bugiri-Malaba highway, Bugiri hospital appears to be a deserted facility.

The tin roofs hovering over the facility are rusted, its doors broken down and the infrastructure is dilapidated.

But coming closer to the facility, you see a number of patients are lining up for different services. This is around 9:00am in the morning. However, a keen look around the facility reveals absence of the senior workers — the medical superintendent, the administrator and junior cadres, are yet to show up.

I am told to wait. Within half an hour, the administrator shows up but she tells me to wait as she attends to the Resident District Commissioner of Bugiri, who had also showed up to check on the facility. 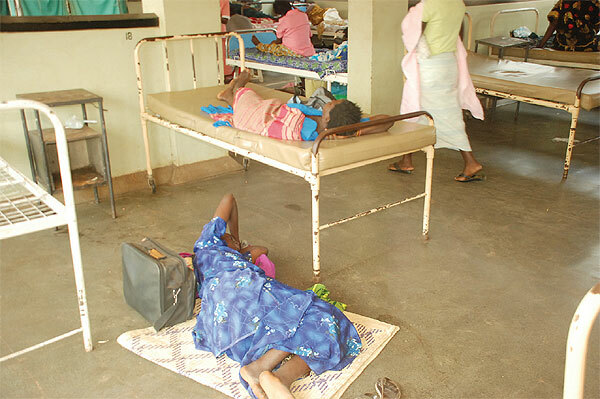 The hospital is in dire need of equipment ranging from beds to drugs. A fresh coat of paint would also be nice

After almost three hours, the administrator, Sarah Nabulime, a short talkative woman, invites me to her office.

Nabulime starts by lamenting that as much as sick people fl ock the facility for treatment, the centre itself is “like a patient on drip.”

Nabulime laments that the hospital has failed to retain its staff who vanish after training.

On the day I visited, the medical superintendent was away. He went for further studies but, unfortunately, after the course that was sponsored by the Government, he vanished.

The facility is also supposed to have three doctors but only two are available — the third went to Nairobi, Kenya for further studies. However, Nabulime fears that when he completes his studies, he is also likely to look for greener pastures elsewhere. Nabulime has lost count of the number of doctors from Bugiri hospital who enroll for further studies but never return.

“Every year, we lose about three doctors who go for further studies and do not come back.

According to Dr. Stephen Kirya, the Bugiri district director of health services, the staff of the facility stands at 52% against the 65% recommended by the Ministry of Health.

“This seems like a good percentage but it’s the core staff who are missing,” he said.

Kirya explains that while the facility is supposed to have about 12 doctors, they have only two. Out of the five specialists they should have, there is none.

Because there are no specialist gynaecologists and obstetricians, every month, two babies and a mother die at the facility due to this shortage.

Thankfully the facility has an x-ray and c-scan machine but no expert to operate it.

The infrastructure can best be described as sick. The beds in each ward are broken, mattresses torn or missing and the few available ones are dirty. The beds are also few forcing some of the patients to sleep on the floor.

The ceiling needs to be replaced

Yet deep in the toilets and bathrooms, a sanitation problem that is likely to cause disease is going on. The toilets are all broken down; sewerage leaks inside the wards and into the consultancy. The floor, walls and the entire infrastructure is dirty, dilapidated and unsuitable for human use.

The facility uses water from an electric pump. However, power cuts have forced the facility to go without water for weeks. The maternity ward has become so filthy – a powerful stench that is indescribable threatens lives there.

“Life is tough in this hospital. We have talked to the district to give us more money to buy fuel for the generator to power the whole hospital but the district is also broke,” adds an health worker, who preferred anonymity.

Bugiri district prepares an annual budget of sh20b but they get only sh50m. However, at the end of each month, they use over sh20m to run the hospital. The facility budgets for sh1m per month to buy fuel for the generator but their annual budget for running the generator is about sh15m.

“This clearly shows you the shortage we face,” adds Dr. Kirya.

Dr. Kirya explains that when there is no power or generator, they are always forced not to carry out any surgeries refering the cases to Iganga or Jinja hospital. However, by the time they cover a distance of about 30km to Iganga or 60km to Jinja, the patients are dead.

No wonder, at the facility, 600 people – including children, women and men die annually.

While the facility, like any other in the country receives its drugs, medicines and supplies from the National Medical stores, the supplies are often inadequate.

But she is also frustrated that they have promised each year in and out but nothing has so far come.

Patients like Alice Nantume who has just given birth without the help of a doctor but a nurse, are desperate.

“I came here to get better care but life is instead tough. At least in the village, a traditional birth attendant will give you some herbs but here there is nothing.”

Nantume explains that she did not fi nd any gloves, so she was advised to buy some.

She also brought her own soup since the facility did not have any. “We request the government to help us,” she pleaded.

Dr. Kirya calls upon the Government to help them recruit human resource and pay them well, “because the districts do not have capacity to attract and retain health workers. It is a pity but we need help.”

Nabulime calls on the government to speed up the plan to rehabilitate the facility to give it a new facelift.

Bugiri district chairman Malijani Azamwa Balubireire called upon the Government to increase funding to local governments and also stop creating more districts so that they are able to pay health workers well.