UTODA has requested High Court to stop KCCA from collecting revenue from the taxi operators.

UTODA has requested High Court to stop KCCA from collecting revenue from the taxi operators.

The management of Uganda Taxi Operators and Drivers Association (UTODA) has requested the High Court to stop Kampala City Council Authority from collecting revenue from the taxi operators.

The petition comes less than a week after KCCA was granted judicial authority to take over control of the taxi parks.

KCCA on Monday this week took over management of the taxi parks after High Court judge, Eldad Mwangushya dismissed a case in which UTODA was alleging that it had a valid contract to manage and collect revenue from the taxi operators till 2014. 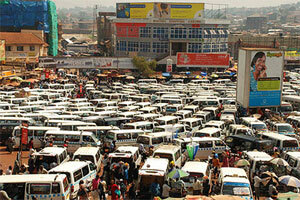 The judge said that apart from the wrong procedure followed in bringing the matter to court, the case itself would have been filed before the Commercial Court, rather than the High Court.

KCCA executive director, Jeniffer Musisi told the High Court at the beginning of November last year that UTODA had no standing contract with the Authority, and therefore was not authorized to collect any dues on its behalf.

She clarified that the extension to the said year of 2014 by UTODA was done illegally as there was neither a clause in the old contract requiring KCCA to renew it, nor any competitive bidding prior to the extension, as the law requires.

But UTODA has since then stood its ground, claiming that its contract is still valid.

Dissatisfied by the recent power transfer decision in favour of KCCA, UTODA on Thursday ran to the Court of Appeal, requesting the High Court to stop KCCA from collecting any more dues, pending the final disposal of their appeal.

Over the past four months, the question of who to control the taxi parks has built up the heat and dispute between UTODA and the Jennifer Musisi-led KCCA.

The two groups have been in and out of court as regards the matter.

Towards the end of October last year, the High Court in Kampala blocked KCCA from terminating UTODA’s contract by granting the drivers’ association a temporary order restraining the Authority from taking over the management of the parks.

UTODA last year had decided to sue KCCA following an announcement by the Authority that it intended to directly manage public transport in the city, which meant controlling the parks too.

The taxi operators body cried foul, arguing that KCCA’s plan was unfair as its (UTODA) contract would expire in 2014.

Both groups remained adamant in their beliefs, as neither side opted to give in to the other’s demands. Even after the recent resolution by court to have KCCA manage the parks and city public transport, UTODA remains dissatisfied.

The drivers’ body first signed its contract with the then Kampala City Council in 1993, and has until a few days ago been at the helm of the taxi business.