Achieng Tezira Jamwa, 17, a former pupil of Uganda School for the Deaf, scored 21 aggregates in the just concluded Primary Leaving Examinations (PLE) to emerge as the best performer of her class.

Achieng Tezira Jamwa, 17, a former pupil of Uganda School for the Deaf, scored 21 aggregates in the just concluded Primary Leaving Examinations (PLE) to emerge as the best performer of her class.

Achieng Tezira Jamwa, 17, a former pupil of Uganda School for the Deaf, scored 21 aggregates in the just concluded Primary Leaving Examinations (PLE) to emerge as the best performer of her class and prove that disability is not inability.

According to Winston Oketcho, the Commissioner Special Needs Desk in the Ministry of Education and Sports, 60 Special Needs schools and 567 pupils were registered to sit for the last year's national exams.

These included 48 blind pupils, 179 were deaf, 158 with no vision, 67 physically handicapped, 38 of them had dyslexic and 77 with multiple disabilities.

Oketcho however, noted that establishing the best candaidate in the 2011 PLE is still a challenge because information regarding the general performance of Special Needs schools was not readily available since some of the disabled children sat for the exams in inclusive education schools.

The Ntinda-based school registered a total of 30 students. Of these, none passed in the first grade, three passed in the second, three managed third grade, eight in the fourth grade, 15 were upgraded and one in Division X.

Daniel Kirya, the deputy head teacher at the school noted that there was a marked improvement in Mathematics and English but with a decline in SST. “This was due to the fact that the questions in Science and SST were too wordy for a deaf pupil to comprehend,” Kirya said.

He appealed to the Ministry of Education and Sports to include Special Needs experts in the setting and marking of exams of children with learning difficulties, noting that it is challenging for a teacher who has not taught such pupils to mark their answer sheets. 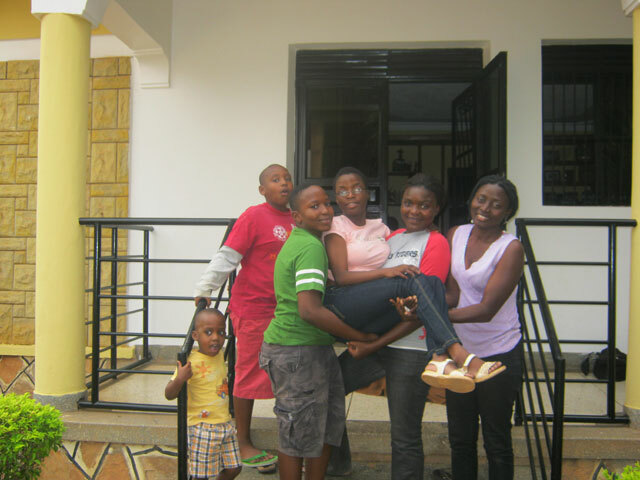 Achieng being "swept off her feet' by her equally excited siblings at their family home. PHOTO by Petride Mudoola

Through an interpreter, Achieng told New Vision that she was capable of scoring a first grade but said the examinations were not easy.

“Some of the vocabulary used in the exams was too hard for the deaf to understand given that our grammar is different from the ordinary one, making it very complicated,” Achieng said.

She requested for Special Needs teachers to be integrated in marking the exams of students with learning disabilities, arguing that the ordinary teachers cross their correct answers assuming they are wrong.

“Though there are challenges we face as disabled students, with assistance from the teachers, matrons and the school administration, I concentrated on my studies and that is how I managed to excel,” she beamed.

Achieng said she wants to be a banker or information technology (IT) specialist in future because she loves mathematics.