The quest to find the ultimate socks comfort
Next Story

Sending off the loved ones, the Ugandan way

The soft sound of wailing is heard, a distance away. It’s a funeral. With each metre closer, the pitch of the wailing gets louder.

The soft sound of wailing is heard, a distance away. It’s a funeral. With each metre closer, the pitch of the wailing gets louder.

Vision Group is celebrating Uganda’s Golden jubilee with stories about what makes us uniquely Ugandan. Today, Vicky Wandawa brings you the funeral procedures unique to some tribes and the trend they are taking to embrace modernity.

Sending off the loved ones,

The soft sound of wailing is heard, a distance away. It’s a funeral. With each metre closer, the pitch of the wailing gets louder.
At the funeral, the mourners have made a crescent around the grave. The casket is slowly eased down the grave. While emitting deafening high pitched wails, some of the women are rolling on the ground, without a care that it’s muddy or dusty.
The other mourners are silently weeping into pieces of cloths, others are wearing a sad far away look and there are a few who are almost falling onto the casket and are simply being held from doing so by other mourners.
Interestingly, that woman crying loudest might not be a relative, friend or even an acquaintance to the deceased…..she might have been hired, as a ‘professional mourner’!
In Uganda, funerals are almost similar, but it is a few cultural norms that differentiate them.
These differences range from several activities; from fulfilling cultural norms the deceased may not have undergone, ensuring that the deceased’s spirit does not return to haunt the living, to ensuring that the deceased rests in peace, et cetera.
Banyankole treat the childless with disdain
In Ankole, as soon as a person dies, information is disseminated from home to home, after which the villagers congregate and the burial arrangements begin. There are village committes, known as twezikye, which take over the burial arrangements, including taking announcements to the media, contributing money feeding mourners and coffin.
They pool money, buy chairs, plates and saucepans for such emergencies. Every resident of the village is expected to be a member of twezikye.
Every mourner is expected to view the body first. If the deceased is a male head of the household, his children are clean-shaved after the burial for inheritance rituals.
In the past, when the deceased was an adult female without children, they would be buried with an innermost banana stem into which they inserted a stick to represent a husband. They would also break an egg on their stomach. For a man, they would place the banana stem with two protruding sticks to signify breasts. This was believed to appease the ghost.
The body would be taken out of the house through the back door or they would break a hole in the wall for the same purpose.
The idea was that if the dead person was harassed in the next world for not producing children, their ghost would return to harass the living people. To avoid that, they passed them through the back door or hole, to confuse the ghost. The ghost would not easily recognise the house.
Having no children was viewed as an abomination and the body of a childless person was not treated with respect or dignity.
The eldest son automatically became the heir unless the deceased said otherwise in the will.
Funerals among the Bagisu
Herbert Buboolo, an elder in Bugisu notes that when a Mugisu dies, preparations for their burial start with trimming all their body hair. The body is then washed clean. Washing is done strictly in the presence of only adult relatives of similar gender with the deceased.
“Washing the body is done on a particular type of banana leaves called lisindalo. The basin, water and leaves used are not be taken out of the room where the washing was done before evening and they are to be kept by an elder.”
The deceased is then dressed up, laid into a casket and buried. However, when an adult male dies, the very first aspect checked is whether they underwent circumcision. If they did not, they are circumcised.
Buboolo explains: “The body is supported by two strong men to stand up straight. A traditional surgeon cuts the deceased’s foreskin off. However, as a punishment for not having undergone the tradition when alive, the body is not supported to lie down; it’s left to fall backwards to the ground.”
The surgeon who circumcises a dead body is by barred tradition from carrying out any more circumcisions and when they do so, it will be a curse to those they circumcise.
The Acholi keep close to their departed
If the deceased parent (father) passes on, clan elders convene in a special meeting to ascertain the heir to the deceased in the presence of his wife (If she is alive). This is normally preceded by burial arrangements, but no relative is supposed to dig the grave as it is the duty of people within the community. 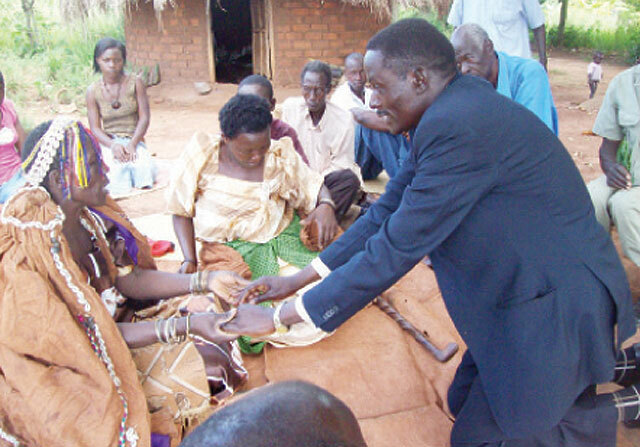 Basoga elders performing cultural rituals after burial of a relative
Many Acholi prefer burying colleagues behind their huts to remain accustomed with them albeit they are dead as opposed to graveyard arrangements of burials.
The children and twins are normally buried near the grave of a grandmother, grandfather or (mother if dead).
In any burial involving an Acholi chief, it is a must for mourners to see some spears, hides of leopards and traditional Acholi regalia on display.
Way back, last funeral rites would indeed come last, but this trend has changed as many homes prefer accomplishing last funeral rites immediately after burial.
This trend has changed because it comes with a cost as regards arrangements in form of taking care of people. However, different people come with their food and alcohol, which is accompanied by funeral songs.
Food, booze and sex part of Buganda  last funeral rites
The deceased is laid down and limbs and facial features straightened out.
“Take for example; if the deceased’s mouth is open, a piece of cloth is tied round their head from its top, over the ears to their neck, to ensure that the mouth is kept closed,” explains a 55-year-old elder from Buganda, Kate Semakula.
A piece of cloth is dipped in water and the body is thoroughly cleaned.
Tradition demands that either sex are to wear their spouse’s underwear to the grave. “If the deceased is a man, his wife dresses him up in her underwear, while saying out loud to him that he has gone to the grave with his wife. Similarly, a man does the same when his wife dies.”  It is believed that this misleads the deceased’s ghost into thinking that they have been buried with their spouse. Therefore, they will not haunt the spouse, especially in the night, for sexual intercourse.
The body is wrapped in a cloth, then a backcloth and laid into the coffin. By tradition, every deceased in Buganda has to be wrapped in a backcloth.
Funeral rites are then held, much later after the burial, where the heiress or heir is installed. The heiress is wrapped with a backcloth, handed a knife and a basket.
The heir too is wrapped with a backcloth and handed a spear.
In the olden days, during the funeral rites, there was unlimited sexual intercourse and binge drinking. The argument was that they were creating continuity through procreation to repalce the dead person.
Ugandans are hiring mourners
She fiercely rolls over and over again on the dusty ground, wailing so loudly and calling out the deceased’s name at intervals. Her face is tear-stained; her hair has gotten some of the dust.
The clothes she is wearing are long so even as she rolls and wails throwing her limbs in all directions, the clothes will not expose any body parts she would naturally not want exposed. She is doing her job as a professional mourner. She has been paid for it and certainly, she is good at it.
This is a new trend, hiring mourners. Death has always been a money-making venture for coffin makers, food caterers, tents and chairs hire companies and of late, professional mourners.
They cry at funerals for a fee. They charge for a day’s service, which ends as soon as the deceased is buried.
There are traditions where loud wailing by mourners is a sign of the love many had for the deceased, hence the need to, in addition to the relatives, have professional mourners wail.
Proscovia Naluwu, a Muganda businesswoman and mother of three who confesses to have witnessed professional mourners at their job explains, “To prepare for their job, the professional mourners ask for information on the age, gender, number of dependants and cause of death among other aspects. During the mourning, they either join in when the actual relatives cry or start the mourning and the others join in.”
Mzee Theresa Namuli, 73, who has witnessed the hire of professional mourners at a relative’s funeral, says it’s shameful and not part of culture although many are embracing it.
She  warns that having a stranger cry at a funeral can bring curses to the family.
Service providers take over burials
With the establishment of funeral homes in Uganda, traditional funerals are fading away, especially in the urban areas. The funeral homes often charge a lot of money and few can afford.
As soon as the news of a loved one’s demise is heard, just a phone call to a funeral home gears up preparations for the funeral. An individual from the funeral home comes to the home and they discuss the nature and rites that would be involved.
The funeral homes offer different packages, right from those that take care of just the body and its transportation, those that take care of the church service as well to those which include dressing the family members in elegant similar outfits.
Funerals handled by funeral homes are usually elegant, from the state of the art casket, the well-dressed employees that hold the casket and the elegantly dressed family members.
This is away from tradition where mourners are expected to dress shabbly and stay unkempt as a sign of mourning.
The body is transported in a hearse as the other cars of relatives follow in line, sometimes, with a siren to clear the way.

Sending off the loved ones, the Ugandan way

How are Busogaâ€™s kings buried?

How are Busogaâ€™s kings buried?