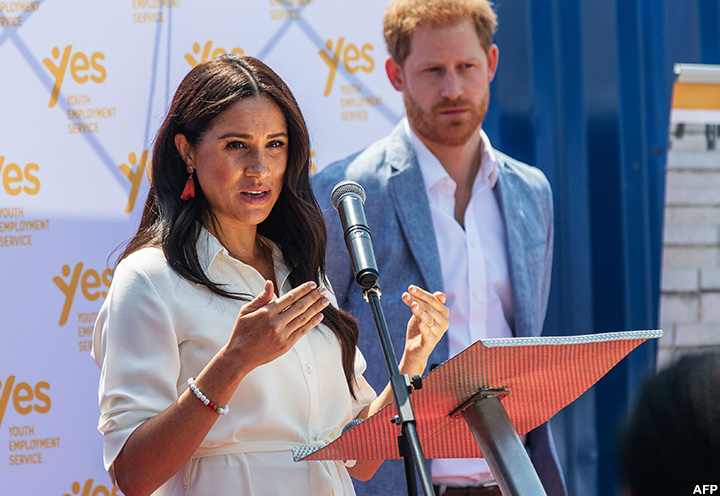 Meghan Markle has paid a moving tribute to George Floyd, the unarmed black man whose death in police custody sparked nationwide protests, as she reflected on her own memories of racism when growing up in Los Angeles.

The wife of Prince Harry admitted she had been nervous to break her silence on the demonstrations sweeping the United States, but said in a video message she "realized the only wrong thing to say is to say nothing."

"George Floyd's life mattered," said Markle, whose mother is black, before listing the names of other African Americans killed by police, and expressing support for the Black Lives Matter movement.

Floyd's death on May 25 in Minneapolis -- a policeman knelt on his neck for more than eight minutes -- has touched off the most serious civil unrest in America since the assassination of Martin Luther King Jr in 1968.

Los Angeles, where Markle now lives with the prince and their son Archie after quitting the British royal family, has been a focus of the marches, with 10,000 protesters flooding the streets of downtown on Wednesday alone.

In the video, Markle described the scenes in Los Angeles as "devastating."

The 38-year-old also recalled deadly rioting that broke out in the city in 1992 after four white policemen were acquitted of charges of brutality after "a senseless act of racism" -- the beating of black motorist Rodney King. The unrest spread nationwide and left 59 people dead.

"I remember the curfew and I remember rushing back home and on that drive home, seeing ash fall from the sky and smelling the smoke and seeing the smoke billow out of buildings," said Markle.

Though not referred to in her video, the specter of racism also followed Markle upon moving to the United Kingdom, where she had a fraught relationship with the nation's press -- some of which was accused by the couple's supporters of prejudiced reporting.

One Daily Mail headline from 2016 -- before the couple married -- wrote: "Harry's girl is (almost) straight outta Compton: Gang-scarred home of her mother revealed -- so will he be dropping by for tea?"

A BBC radio presenter was fired in May of last year for posting a tweet that showed an image of the couple holding hands with a chimpanzee dressed in clothes, following the birth of their son, Archie. The caption read, "Royal Baby leaves hospital."

In her message played at a "virtual graduation" late Wednesday for the Los Angeles high school she attended, Markle also named black victims such as Breonna Taylor, a medical worker shot in her apartment in March in Kentucky.

The short life of Tamir Rice, a 12-year-old boy shot while playing with a toy gun in 2014 in Ohio, also "mattered," Markle said, "and so did so many other people whose names we know and whose names we do not know."

Markle recalled a teacher at Immaculate Heart High School who left a lasting impression on her, telling her to "always remember to put others' needs above your own fears."

"I've thought about it more in the last week than ever before," she said.

Markle and Harry have spoken of their desire to "to do something of meaning, to do something that matters," in California, where they plan to launch a wide-ranging non-profit organization named Archewell.

In April, they handed out meals to chronically ill people in Los Angeles during the coronavirus lockdown.

The couple announced they were pulling back from their British royal roles in January and officially resigned in April.

They first moved to Canada before settling in California.