Uganda to produce and export casein
Next Story 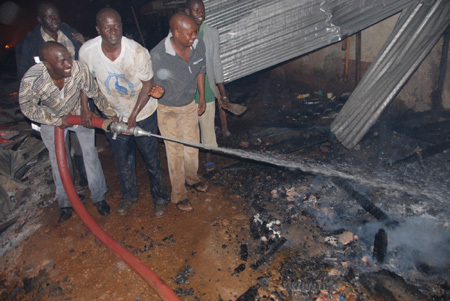 The fire, which started inside a single stall at the end of the market, along Cathedral Avenue at about 8pm, spread out and consumed all the wooden stalls therein.
Tongues of wild flame tore the stalls as thick smoke billowed to the air. At its height, the flames licked the roofs and walls of the storied buildings surrounding the market sparking off fears that it would spread out to surrounding residential houses mainly occupied by the Indian traders.
Police struggle to put out the fire
As the lone police fire brigade truck, which frequently ran out of water, battled to contain the fire, traders and well-wishers fetched water in buckets and other containers from the surrounding taps and struggled to put out the fire.
On the balcony of storied building, Indian residents splashed out water in jerrycans and saucepans to prevent the fire from spreading to their houses.
Most traders who flocked the market to rescue their wares found the gates padlocked and forcefully broke in. Some managed to salvage a few items as the fire destroyed one side of the market before ultimately razing all the stalls. 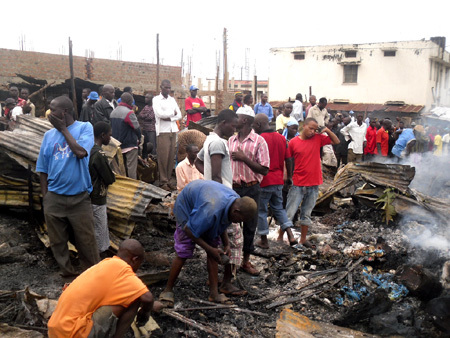 “I have managed to save only 50 phone batteries and phone jackets. The rest burnt to ashes. I invested about sh50m in my business and when I heard the market had caught fire, I drove from my residence at break-neck speed. But the police barred us from entering the market until traders became wild and broke in,” narrated James Buliba, a trader in the market.
“Some women in the market leave beans cooking on sigiris (charcoal stoves) at night so the food can be ready for sale in the morning. We highly suspect the fire was sparked off from one of the charcoal stoves,” Buliba added.
Looters raided the scene of the tragedy and made good of the disaster fleeing with traders’ properties.
Children pick scrap after the fire
Amidst the confusion, the looters broke in to the market with traders on site and made off with items of traders not at the scene.
An unidentified woman clang on the waist of a male looter who tried to flee with her bags of merchandise and he nearly survived mob justice as he was whisked away by the police.
“People can be so dark-hearted. Some men came pretending to help me and rescue my property from the fire and made off with it,” Aisha Namono, a trader in the market ranted. 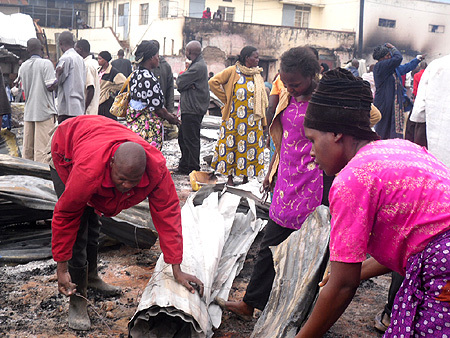 An Indian whose storied residential house partly caught the flames, who preferred anonymity, said he had advised the traders to avoid congestion in the area considering that the market is nestled amidst residential houses but he was ignored.
“The stalls were so close to each other and leaned on our houses. We anticipated that in case of any fire outbreak , we would be affected,” the Indian said.
Jacob Opolot, the Mbale district police commander stated that the police was yet to establish the cause of the fire.
However, Opolot noted that the market was congested and poorly planned which did not facilitate entry of the police fire brigade vehicle.
Venders collect the remains of their merchandize
“If they had a road within where the fire brigade vehicle could pass, we would have battled and saved some property. But the whole place was compact with stalls.
The market had a lot of flammable items such as plastic containers, suitcases, vegetable oil and worse still, the stalls were built with cypress wood which is highly flammable,” Opolot said.
The traders relocated to Lorry park market from Mbale main market last month to pave way for the construction of the sh29b modern market.