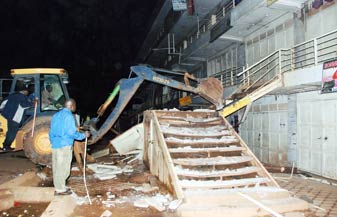 KAMPALA Capital City Authority (KCCA) in the wee hours of the Saturday started demolition of illegal staircases in city that do not have plans to operate in Kampala and are blocking pedestrians.

The exercise that started this morning by KCCA officials was made known to the owners of the buildings through a month’s notice, one that they never complied to.

On Saturday morning owners of the businesses located on the staircases shed tears while others lamented that they were not warned.

About eight buildings which included among others Nabukeera Plaza, Quicell, Premier Arcade, Leisure Tech Hotel and other commercial structures on Nakivubo road and had their staircases razed down.

Other buildings that may face demolition of their staircases are Jesco, Skyline shoppers on Nabugabo road among others.

These buildings have illegal staircases that were blocking pedestrians.

The demolished structures and premises are those that were constructed without KCCA plan and those that have failed to pay business permit.

George Agaba director of physical planning KCCA said the exercise will register demolition of kiosks, Toilets Shops and other illegal structures in and around the city.

Some of the owners of the buildings say that they have approved plans that were used to construct.

Agaba insists that the owners of the buildings were given prior time to register their businesses or present evidence of payment business fees and their construction plans as approved by KCCA.

However, some of the owners of the buildings say that it was a short notice.

This exercise is to continue into parts of the central business district and its suburbs with the demolition of structures that weren’t approved by KCCA and this comes at a time to make the city have the standards that match the international standards.