Home
NEWS
MEDIA
Supplements
Tenders
Notices
“Our matooke is ripening in the garden. The price has reduced from sh20,000 to 5,000. Even the trucks that used to come from Kampala to buy our produce are not coming,” Bigabwa

“Our matooke is ripening in the garden. The price has reduced from sh20,000 to 5,000. Even the trucks that used to come from Kampala to buy our produce are not coming,” Bigabwa

Fresh produce is accumulating at farms, resulting in food and financial losses for farmers who are unable to sell their produce due to transport and market access bottlenecks caused by COVID-19 pandemic.

In Uganda coronavirus has infected 53 people and caused an unprecedented number of shutdowns of schools and businesses.

Transport restrictions and the ban of weekly markets where many farmers sell their produce are impeding farmers' access to input and output markets.

This is curbing productive capacities and denying a point of sale for produce. 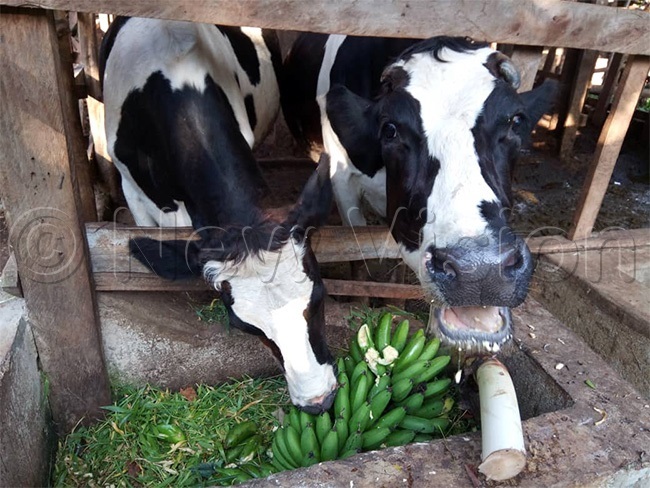 "Schools, hotels were the big markets for agricultural produce but have since closed. We are worse off because I have a lot of matooke that are getting ripe and rotting in the garden," says Julius Bigabwa, of BIGLAD farm in Kabarole district.

He explains that the locals who would on a daily basis buy food, have stocked dry foods and are unable to buy fresh food due to movement restrictions.

"Our matooke is ripening in the garden. The price has reduced from sh20,000 to 5,000. Even the trucks that used to come from Kampala to buy our produce are not coming," Bigabwa says.

Although Bigabwa has resorted to feeding his matooke to his cows, he says it is not cost-effective.

"I produce 500 bunches of matooke every week. Sometimes I can't even sell 100 bunches," Bigabwa says.

Uganda has not restricted agricultural farms, farmers' markets, food stores, takeaways, and food and beverage manufacturing facilities from being open.

However, access to these areas is a challenge due to the ban on private and public transport.

These operations are exempt under the mass gatherings guidance as essential food supply chain industries.

"When we go to the market, we don't find the people. Those who come buy very little from us. People are not buying a lot because they are not sure of what will happen the next day," he explains.

Despite these challenges, Bigabwa says the price of milk has remained stable and since he uses a bicycle to sell it, he has not been affected.

"Milk is still going on well. A litre is at sh1,000. The other advantage is that animals can feed on matooke," Bigabwa says. 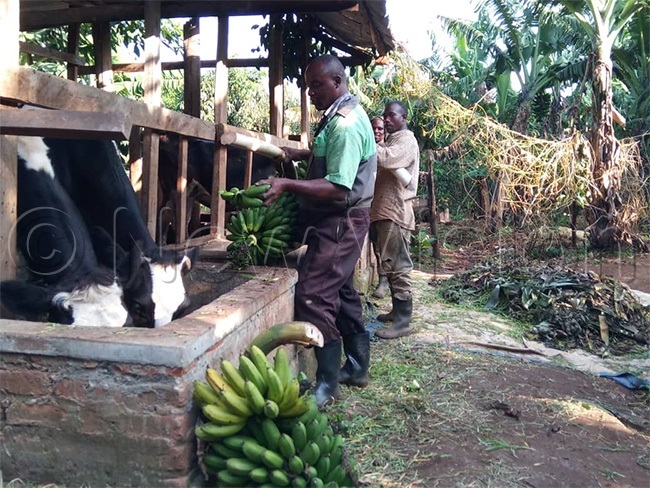 By feeding his animals on matooke, the cows produce thick milk which he has decided to convert into cow ghee.

"I have four workers who I have to pay to run my farm. I have also employed two askaris to secure my farm because of thieves during the lockdown," he says.

Farmers are also faced with shortages of raw material in particular an inadequate supply of feed and medicine, to livestock farmers are the main result of these disruptions.

Grace Bwogi a renowned goat farmer at Bwogi Farms says she lost over 50 goats after spending nine days without accessing her farm located in Rakai district after the lockdown got her in Kampala.

"I knew my animals were dying but I had no means to take the antibiotics. But somehow, I found means to go there and treated them," Bwogi says.

She explains that many farmers are having trouble accessing seeds yet it is the planting season. Bwogi warns that in future Uganda may face a food shortage due to low production.

"Many farmers are locked in Kampala, many do not have seed to plant, which is a threat to food production in the future especially grains and beans," Bwogi says.

Arnold Muhumuza, a farmer from Bundibugyo says he cannot get feeds for his birds and fish since there are no means of transport to Kampala.

"We used to depend on buses and trucks that carry commodities but now they are hard to get by. I have resorted to feeding my fish with maize brand which will affect the productivity," Muhumuza says.

The transport restrictions prevent much-needed animal feed such as corn and mukene meal from getting delivered to livestock farms.

"It is vital that adequate measures are in place to ensure continuity. If not, we may not recover, my birds are starving," Muhumuza says.

"We think the food they had stocked in the houses will be done by next week, and our hope is maybe the restrictions will be relaxed and we sell," Muhumuza says.

According to Patrick Matovu, a poultry farmer from Luwero district, transport is the biggest challenge farmers are facing at the moment.

She is struggling to feed his 3,000 birds since he can't easily access the feeds.

"Majority of the farmers do not have trucks to deliver produce or to get feeds. Like for me, I have to buy feeds from Kampala every week but it now impossible. The one I had stocked is getting finished," Matovu says.

To make matters worse on Wednesday, President Yoweri Museveni banned empty pick-up and double cabin trucks which some farmers use to go to their farms.

"We don't how we are going to go through it. That means I can't drive my pickup to Kampala to pick feeds.

Likewise, if I take produce to Gulu I can't drive back home with an empty vehicle. This is not fair on us," Matovu says.

The other challenge is the increase in maize prices vis-a-vis the drop in egg prices.

Whereas Uganda's efforts to ease the effects of Coronavirus continue, the government and agricultural community are working together to keep agricultural products moving, however the longer the situation stays like this the more farmers will end up losing.

The question is how long this shutdown last? At this point, it is anyone's guess.