Home
NEWS
MEDIA
Supplements
Tenders
Notices
Robert Ongom, the Omoro District Health Officer (DHO) said after the installation of the solar facilities, all the maternity wards in the district will have been connected.

Robert Ongom, the Omoro District Health Officer (DHO) said after the installation of the solar facilities, all the maternity wards in the district will have been connected.

The Omoro district chairman (in the middle) being helped to put on headlights which will be used by midwives. Photo by Arnest Tumwesige

The installation of solar systems in 122 health centres has created relief to the midwives and the expectant mothers from delivering in darkness.

In Omoro district, all the 19 health centres with maternity services have been supplied with Solar Suitcases and installed.

The solar equipment's procured under the Light Every Birth project is being implemented by We Care Solar organisation in partnership with the Ministry of Health and AVSI Foundation.

Andrew Engalu Steven from We Care Solar organisation said about sh1.4b had been spent so far and installation would take a month.

Just like the project's name, Light Every Birth, the solar systems are only being fitted on maternity wards with the view of aiding health workers to deliver mothers with enough light.

Robert Ongom, the Omoro District Health Officer (DHO) said after the installation of the solar facilities, all the maternity wards in the district will have been connected.

Ongom cited Ongako Health Centre III where deliveries had drastically reduced to 25 per month because mothers too were shunning the facility due to lack of light.

"Previously, this facility would register about 50 deliveries every month, but the number kept on reducing. This was because midwives would use phone torches and kerosene lamps to help mothers deliver," he observed.

Relatedly, Geoffrey Ociti, the in charge of the facility, said the existing solar system would go off by 10:00pm due to mechanical problems and thereafter, the midwives would resort to their phones. 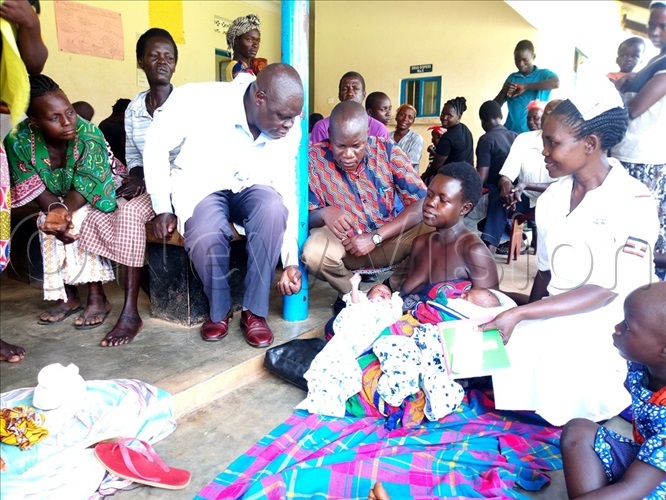 Mothers speak out
Harriet Oroma from Laminowino village in Ongako sub-county told New Vision that she could not afford to deliver from Ongako because the maternity wing is ever closed at night.

Carrying a one-month-old baby, Oroma said she had to deliver from St. Mary's Lacor Hospital in Gulu municipality because she was very sure that getting the services from Ongako would be hard.

"I have been seeing other women who come here, they complain that the facility is ever closed due to lack of enough lights at night and the nurses too were not willing to wake up," she noted.

Grace Auma, the councilor III for Abwoch parish said Abwoch Health Centre II which has also benefited had virtually closed maternity services due to the difficulties in working at night.

Meanwhile, Peter Douglas Okello, the Omoro district chairman cautioned expectant mothers against opting to seek services of traditional birth attendants due to the costs they come with.

Okello explained that in the process, a mother may lose her life and if it's safe delivery, the attendant always wants to be appreciated in kind and heavily.

Selection of the facilities
The selection of the health centers first begun with assessment in the eight districts of the Acholi sub-region and this was carried out by AVSI foundation. The exercise was conducted from September to October 2019.

Dr. Lawrence Ojom, the health program manager AVSI said in all the facilities, it is evident that due to lack of lighting systems, delivery had declined.

Dr. Ojom added that, while some were connected to grid power lines, they could not afford to pay the bills and others had opted to use torches.

Apart from the wall lights, the installed solar systems also have headlamps for the midwife to see the details of the baby, a doppler machine for examining the baby's heartbeat and the provision for charging phones.