Home
NEWS
Media
Supplements
Tenders
Notices
According to the IRA, a lot of cargo importers are still tied up to the idea of insuring their imports at the country of origin, therefore, denying the country’s insurance sector massive revenue.

The Insurance Regulatory Authority (IRA) has set January 2020 as the start date for importers to compulsorily buy marine cargo insurance from local providers.

Marine insurance is concerned with the insurance of cargo in transit from one place to another by sea, by inland waterway and onward by rail or road.

According to the IRA, a lot of cargo importers are still tied up to the idea of insuring their imports at the country of origin, therefore, denying the country's insurance sector massive revenue.

"Effective January 2020, all imports must have a valid marine insurance cover underwritten by a Ugandan registered insurance company before clearance by Uganda Revenue Authority.

The new requirement makes it easier for importers to lodge claims with Ugandan insurers as opposed to the cumbersome procedure of lodging insurance claims with foreign insurers for lost or damaged goods," Steven Kaddumukasa, senior inspection officer,  Insurance Regulatory Authority of Uganda said. 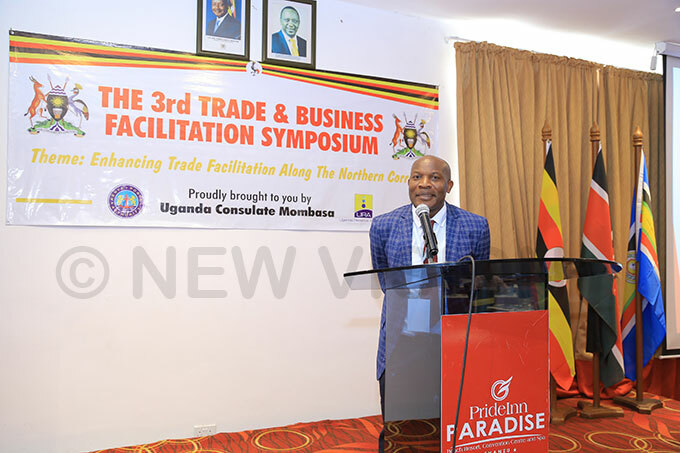 Kaddumukasa said while delivering a presentation on the topic ‘The benefits of insuring cargo'. He said similar legislation has been effected in Kenya and has promoted demand for marine insurance as can be sighted to have contributed to a 41.5 % increase in Marine Insurance premium in 2017 in Kenya.

He was backed by the Commissioner, Customs and Border Control Kenya Revenue Authority Kevin Safari who said Uganda should up its game by using the electronic single window to implement marine insurance.

"Insurance is very important for local conveyance of cargo. In Kenya we are giving marine cargo insurance business to local companies. You have to harmonise the implementation framework through the Uganda Electronic Single Window to make many processes paperless. It will be the system taking no human interface," Safari said.

The Electronic Single Window is a facility that enables government agencies, traders, clients engaged in international trade to process and submit all the regulatory documents including permits, licenses, customs declaration using one electronic platform for purposes of facilitating trade.

Kaddumukasa went on to state that the Uganda insurance industry has developed capacity over time and have demonstrated readiness to handle marine business and all its attendant costs. He said in 2018, the Gross Written Premium (GWP) income increased by 17.51% from sh728.4b in 2017 to sh856b. He said claims payment increased by 11.97% from sh291.7b in 2017 to sh326.7b while the Insurers' Net Asset base that is assets less liabilities increased by 11% from sh458bn in 2017 to sh508b.

"The insurance industry is already insuring large importers like Mukwano Group, Roofings Group and Coca Cola Beverages Africa Uganda," he explained. He said Section 3(2) of the Insurance Act of Uganda states that no person, other than a person licensed as an insurer under this Act, shall issue any insurance policy on ‘goods imported from other countries except personal effects and donations'.

This provision, he said means that, if any Ugandan importer chooses to insure their imports, they have to do with a Ugandan insurance company.

Dicksons Kateshumbwa commissioner of customs Uganda Revenue Authority (URA) said URA was in the process of implementing the regulation to support local underwriters in their push to grow insurance coverage by giving them marine cargo insurance.

Kaddumukasa explained that there will key benefits to the Government once local underwriters clinched the business of marine cargo insurance. He said there will be increased tax revenue estimated at $67m (sh247b) in VAT and $10m (sh36.9b) in Stamp Duty within five years of full compliance and insurance premiums worth $371m (sh1.4trillion) will come to the local insurance market.

He explained that with local insurance for marine cargo, there would be eased claims settlement and low costs of claims processing, due diligence and general administration. "More employment opportunities will be created locally. A strong Insurance Sector means a stable and resilient economy.  Local insurance companies shall use a percentage of the marine insurance premiums (successfully retained) to invest in literacy and CSR," he said.

He said other benefits include; right valuations under the insurance will help counter current practices of under-declaration of goods and hence loss of revenue. He said there will be competitive and favorable premium rates arising from the economies of scale, eased communication flows, provision of Insurance Cover at appropriate premium rates as opposed to the existing loading of 1.5% flat rate for purposes of tax.  "Reducing insurance costs means reducing commodity prices. Timely payment of claims at minimal cost," he added.

The ministry of finance made a key pronouncement in the FY2017/18 aimed at empowering locally licensed insurance companies to issue all policies relating to domestic marine cargo insurance effective July 1, 2017 but it was not implemented.

He noted that the Ministry of Works and Transport is expected to carry out sensitisations in collaboration with other stakeholders. He said the ministry of works should ensure that importers have complied with section 9(2) and (3) of the Insurance Act, 2017 during registration of imported motor vehicles.

He said the URA is expected to make provision for the Marine Cargo Insurance Certificate on the URA Single Window, to enforce penalties for non-compliant importers, to participate in the sensitization of the insuring public

The IRA is expected to work hand in hand with URA to impose penalties on non-compliant importers, carry out sensitization workshops in collaboration with other stakeholders and design the compulsory marine cargo insurance certificate in collaboration with the Uganda Investment Authority (UIA).

The IRA is expected to make the Marine Cargo Insurance Guidelines, approve minimum premium rates for marine cargo insurance collaboration with UIA and to engage the insurers to ensure that they pay claims promptly.

In Uganda, the principle statute governing marine insurance is the Marine Insurance Act 2002. The Act defines a marine insurance contract as a contract whereby the insurer undertakes to indemnify the assured, in manner and to the extent thereby agreed, against the losses incident to marine adventure.