Home
NEWS
MEDIA
Supplements
Tenders
Notices
For a long time now, His Excellency President Yoweri Museveni has consistently advanced the message of wealth creation through commercialized agriculture (Farming with Ekibalo). What was not coming out clearly through his message is the aspect of cassava commercialization and industrialization.

Under Vision 2040, the government of Uganda aspires to reach middle-income status by pursuing a series of policies, strategies, and plans to achieve this goal.

Despite the peace and stability in the country and several intervention programmes such as the Entandikwa, Peace, Recovery and Development Plan (PRDP), Northern Uganda Social Action Fund (NUSAF), Youth Livelihood, Women Fund, among others; Northern and North Eastern Uganda have continued to lag behind the rest of the country in terms of development and wealth creation. 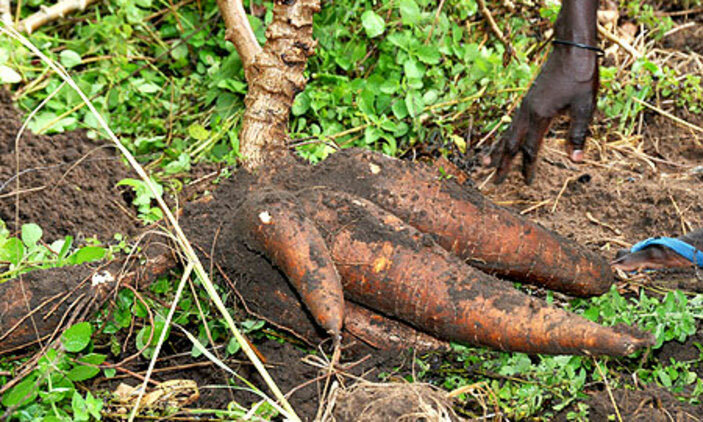 A comprehensive analysis of the Northern and North Eastern economies indicates that raising agricultural productivity and output; and increasing farmer's access to markets would increase the greater north agricultural output.

It would also boost its Gross Domestic Product, and also enlarge opportunity for employment and household income thus reducing poverty. This can be attained through promoting the private sector value chain and removing private market bottlenecks, building sustainable and inclusive commodity sector development.

Besides, cassava has a strategic role in ensuring resilience to the adverse effects of climate change. There are great opportunities for cassava to contribute to increased household income and poverty reduction.

Important to note first is that cassava is one of the most important sources of carbohydrates. It is used to make tapioca, animal feed, and even laundry starch. Starch and starch products are used in many food and non-food industries and as chemical raw material for many other products.

Non-food use of starches - such as coating, sizings, and adhesives - accounts for about 75 percent of the output of the commercial starch industry. In the food industry, Scientists argue that cassava can be used to substitute wheat almost 100%.

Empirical scientific studies have also shown that cassava is relevant in boosting immunity and regulate digestion. The root of the plant is rich in Vitamin C while the leaves contain beta - carotene, lysine and other compounds beneficial to the skin and metabolism.

Cassava starch is used in biscuit making, to increase volume and crispness. It is also used in sweetened and unsweetened biscuits and cream sandwiches at the rate of 5-10 percent to soften zyes texture and make it non-sticky.

The use of dextrose in some kinds of yeast-raised bread and bakery products has certain advantages as it is readily available to the yeast and the resulting fermentation is quick and complete. Starch is being used in the Textile industry to strengthen linen.

The recent scientific research has also proved beyond a reasonable doubt that all medicines can be made from cassava. For example, liquid glucose for syrup and or sweets. In the paper industry cassava can be used for biofuels.

In addition to the above, cassava can be used to substitute industrial leakers. Currently, about 90% of Industrial leaker in Uganda is heavily imported. Approximately only 10% of leaker is produced locally. In the breweries industry; there are beer products that are excluded from cassava as raw material for example Senator or Engule!

Modified starches are also used in the manufacture of many types of (hard candy), fondants and Turkish delight. In confectioneries, starch is used principally in the manufacture of gums, pastes and other types of sweets as an ingredient, in the making of molds or for dusting sweets to prevent them from sticking together. Dextrose prevents crystallization in boiled sweets and reduces hygroscopicity in the finished product.

Last but not least Cassava is widely used in most tropical areas for feeding pigs, cattle, sheep and poultry. Dried peels of cassava roots are fed to sheep and goats, and raw or boiled roots are mixed into a mash with protein concentrates such as maize, sorghum, groundnut or oil-palm kernel meals and mineral salts for livestock feeding.

In many tropical regions, the leaves and stems of the cassava plant are considered a waste product. However, analytical tests have proved that the leaves have protein content equivalent to that of alfalfa that is about 17%-20%.

In Conclusion, therefore, commercialization and industrialization of cassava will impact the lives of the rural poor particularly those in north and northeastern Uganda as it will improve household income and reduce poverty prevalence for the cassava producing rural farmers.