Home
NEWS
Media
Supplements
Tenders
Notices
The search carried out by eight different groups started on Monday with an aim to curb down rampant power theft.

The search carried out by eight different groups started on Monday with an aim to curb down rampant power theft.

UMEME limited in a joint effort with the Uganda police yesterday carried out an operation in Bwaise and surrounding areas and arrested twelve power theft suspects.

The search carried out by eight different groups started on Monday with an aim to curb down rampant power theft.

Six suspects were arrested on Monday and twelve on Tuesday and taken to Kawempe police station. The groups traversed the area checking the status of the installations to establish whether the transactions were normal.

According to the UMEME metering services manager, Kampala East and North East Engineer John Nuwamanya, up to 26% of the power supplied to the area is being dispatched by people who are either on direct or indirect supply. 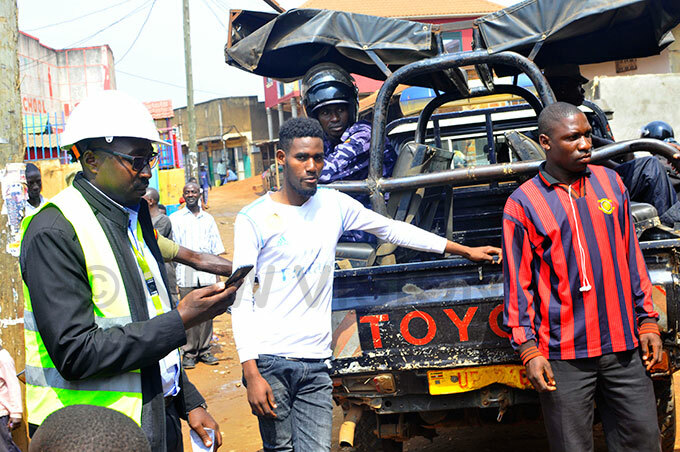 John Nuwamanya (left) the metering service manager for Kampala East and North East with Addul Shaffic and Paddy Ismail suspects arrested in the UMEME operation in Bwaise at Club 1 Ten to curb down the theft of electricity in Kampala. (Photo by Wilfred Sanya)

"This causes financial leakage of up to shs2bn per month thus affecting the country's economy and business at large," Nuwamanya said.

He added that this leaves UMEME as a company in a position that it can't clear its customers' invoices from transmission points.

The suspects caught at club one-10 in Bwaise were Abdul Shaffick and Paddy Isma who were found at the club premises.  These were also found with shisha packed in bottles as noted by one of the police officials at the scene.

Nuwamanya noted that a service disconnection notice was issued to the owners of the club on Monday but acted outside the directives therein.

In Bwaise Katoggo zone, the operation group found out that the owner of JP Complex illegally supplies power to a number of houses around.

One of the individuals found at a building site who claimed to be the head of construction was arrested after he couldn't disclose the landlord's contacts and whereabouts.

Nuwamanya noted that they faced resistance from some of the communities which prompted them to work in conjunction with the police for the locals would comprehend in the presence of police.

"Suspects will be taken to Utility court at Buganda road court and be charged in accordance to the laws of Uganda," said Nuwamanya.

However, most of the houses were locked at the time the operation group reached in the area an indicator that there was an illegal action.

According to Nuwamanya, UMEME still faces a challenge of imposters who execute the vice countrywide claiming to be their staff. He warned the public to be keen with such people by checking their identification cards.

He said this in reply to some of the locals who claimed that it is UMEME staff that carries out the power connections.

Fred Ssentongo, a mechanic at Bayanga auto spares in Bwaise Katoggo zone noted that the operation is necessary because illegal power usage can cause a lot of problems and probably deaths through electric fire outbreaks.

"Wherever there are slums and shopping centers, the tendency to steal power is higher than in the upscale areas," said Nuwamanya. He noted that the operation is to go on in order to curb down the vice.

Meanwhile, ERA is currently scrutinizing UMEME performance parameters for 2019 to 2025 which was effected in March 2019. The report sets performance targets which guide UMEME's investment for the next six years.

However, the rising power theft amongst its customers might distort its performance.

UMEME was recognized by the World Bank as being one of only two efficient utilities in Sub Sahara Africa according to the UMEME managing director, Selestino Babungi.

In a report presented by Babungi in January 2019, he argued that operation costs are largely determined by number of customers and distribution lines. He also revealed that they invested an average of 13% above what had been approved by the regulator in the 2012-2017 period.

He also noted that they serve Ugandans cheaper than regional counterparts. He said that operating costs are 23% lower than what they should have been.