Home
NEWS
MEDIA
Supplements
Tenders
Notices
Started in 2016, the project aimed at saving money amongst residents which would later be used for soliciting mitigation methods against flooding, soil erosion, water logging and mudslides which have claimed hundreds of lives in the past few years in Elgon sub-region.

Started in 2016, the project aimed at saving money amongst residents which would later be used for soliciting mitigation methods against flooding, soil erosion, water logging and mudslides which have claimed hundreds of lives in the past few years in Elgon sub-region.

MANAFWA - Three years ago when Musa Mandu, told his wife and relatives that he was going to quit his local government job to work on environmental issues in Manafwa district, they were explicitly upset.

"They didn't understand what that meant. They never thought this would sustain me and my family financially," Mandu explains. "It wasn't and still isn't something people think can bring daily bread. No one; especially among us the ordinary folks understand benefits of environmental conservation."

But the former mechanic ignored his wife's and relatives' concerns and opened a village SACCO dubbed Bubulo Environmental Conservation Project. The project was formed with a common objective of conserving the environment within Manafwa district and its neighbouring areas.

"In our area (Bubulo village), I wanted to ensure that people understood that prioritizing the environment in whatever we do as locals all the way to policymaking is not only about protecting nature, but also ensuring that we lead better lives with financial stability," Mandu emphasizes.

It's against this background of belief and ideology that Mandu and a few residents of Namutembe cell-Bubwaya ward, Manafwa town council in Manafwa district formed Bubulo environmental conservation project SACCO group.

Started in 2016, the project aimed at saving money amongst residents which would later be used for soliciting mitigation methods against flooding, soil erosion, water logging and mudslides which have claimed hundreds of lives in the past few years in Elgon sub-region.

"A few people understood my goal and willfully joined me and together, we agreed to start this SACCO with 10 visionary members who each contributed sh20,000 and sh50,000," he expresses.

This money is what the team used to buy tree seedlings which they later used to start a tree planting project. As per their SACCO by-laws; each of the 10 founding members of the project was required to provide an acre of land whereby 100 trees per acre would be planted by the group.

The group preferred indigenous trees which were grown in the African Traditional Society times like the Mvule tree, alongside pine and eucalyptus trees because their roots had proved to possess better soil holding capacity and could hold water, not to mention being friendly to crop production.

According to the group, natural disasters used to be a challenge in the area with a high level of frequency, one thing that has drastically reduced unlike in the neighboring Bududa, Namisindwa and Butaleja districts where heavy rains have always triggered deadly disasters.

Today, several community members in and around Manafwa district have appreciated the project and are getting on board. 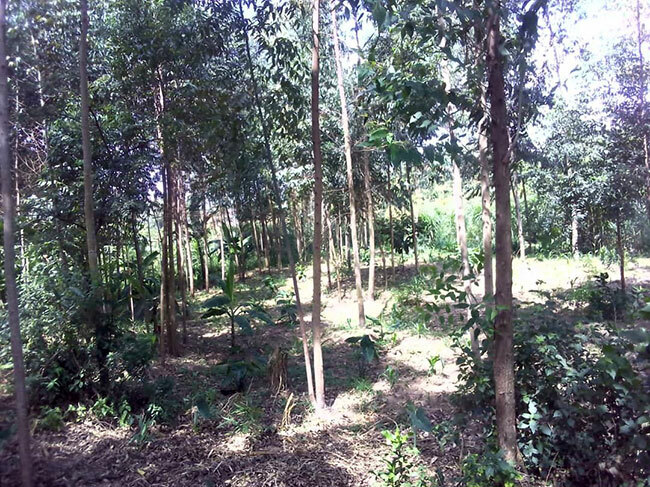 According to Mandu, the membership has gradually grown to 72 members and at least 30,000 trees have been planted so far. This project lies on a property of 32 acres of land which is communally owned by the members under a memorandum of understanding.

Most of these trees are planted along the streams and river banks so as to control mudslides, flooding and waterlogging which are common developments on the slopes of Mount Elgon.

"Climate change and global warming are a big threat to the world today because of how irresponsible our interaction with the environment has become. Nonetheless, we as humans can make the difference in a positive way by learning from our experiences," Mandu firmly states.

"I think now everyone has seen how seasons are changing, with the heat levels skyrocketing and water levels reducing. It means we need to act now. We do not necessarily need to wait for government intervention," he advises.

Asked how he has since financially sustained his family, Mandu discloses the fact that besides selling some trees for timber, the group has beehives encompassed in their man-made forests from which they earn money through honey sales.

Mandu urges every community in Uganda to embrace this group's approach. "It would help save Uganda's reputation globally because, during the 2016 United Nations Climate Change Conference in Marrakech, Morocco, it was revealed that Uganda is one of the countries that have not done much to curb climate change," he says.