In March last year, an Israeli company, Together Pharma was cleared by the Uganda Investments Authority (UIA) to grow medical cannabis (marijuana) for export in Kasese district.

The government is in the process of amending colonial laws that prohibit production of cannabis, to allow a new line of investors that could potentially change the country's economy, agriculture state minister Christopher Kibazanga has said.

He said already, a team from the government is preparing a cabinet paper that would direct discussions on the merits and demerits commercial production of industrial Cannabis, before a final decision is made.

"It is important for us to have clarity on what we want to achieve from this venture, instead of doing things haphazardly and turn the whole country upside down," he said.

This was on the sidelines of the Association for Strengthening Agricultural Research in Eastern and Central Africa (ASARECA) council of patron ministers summit at the Speke Resort, Munyonyo on Friday.

As it stands, production and consumption of Cannabis and its products is illegal in Uganda, having been outlawed by the colonial government in 1902.

The Narcotic Drugs and Psychotropic Substances Act 2015,also prohibits the production, sale or distribution of a narcotic drug or psychotropic substance ,committing offenders upon conviction to a ﬁ ne not exceeding sh2.4m or imprisonment not exceeding ﬁve years or both. 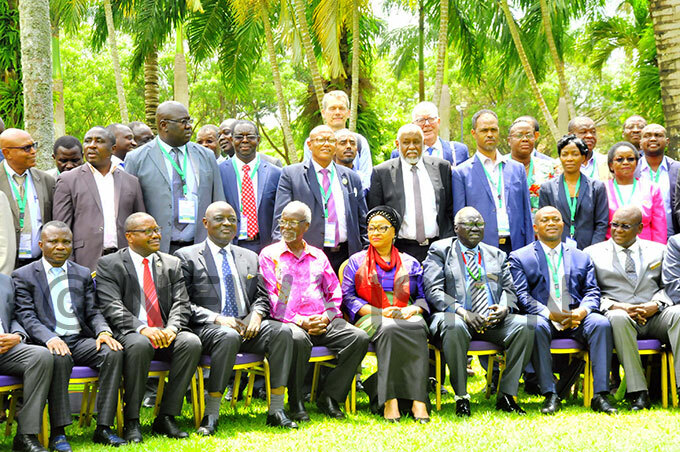 Government officials and other officials   at the summit in  Munyonyo, Kampala. (Photo by Wilfred Sanya)

In March last year, an Israeli company, Together Pharma was cleared by the Uganda Investments Authority (UIA) to grow medical cannabis (marijuana) for export in Kasese district.

However, their licence was shortly after suspended by the state minister of Finance and Investment, Evelyn Anite, on grounds that government needed further assurances before clearing the firm.

According to Kibazanga, the Israeli firm's licence was not withdrawn, but only suspended to allow the government more time to study the benefits, challenges and legal aspects associated to growing medical cannabis for export.

He said:" One of the things being considered is asking the investors to establish a value chain with in the country so that we export a finished product, instead of harvested leaves," he said.

He said the government is optimistic that should legalities be dealt with, to ensure that the plant is grown in a very safe and regulated environment, it would turn around the economy of the country. 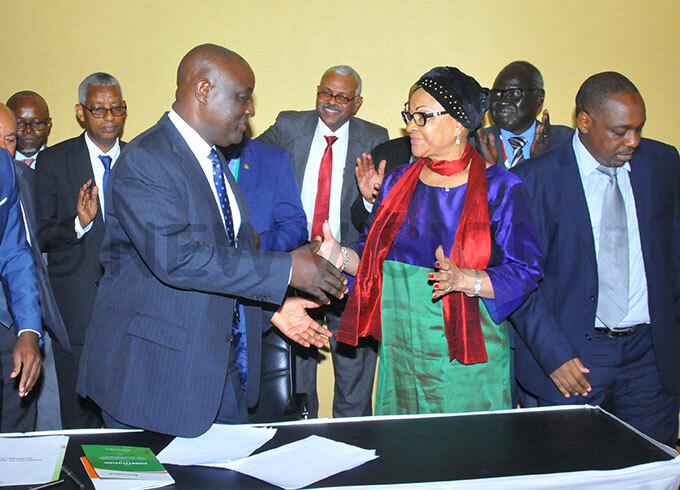 Minister of Agriculture Vincent Ssempijja being congratulated by the Commissioner of Rural Economy and Agriculture African Union, Josefa Leonel Sacko at the signing communique of the ASARECA Patron Ministers Summit at Munyonyo, Kampala. (Photo by Wilfred Sanya)

Medical cannabis refers to extracts obtained from the Marijuana plant, whose products are prescribed by physicians to help treat a range of illnesses and symptoms, especially cancer.

Across the globe, cannabis is one of the most exciting growth industries and is garnering significant attention from investors, manufacturers and researchers.