After nearly two decades without a national flag carrier, Uganda now relishes bragging rights over a pair of CRJ900 Bombardier aircraft after a successful handover ceremony.


When Uganda's brand-new planes straddle the tarmac of Entebbe International Airport for the first time Tuesday next week at around 3pm local time, a new chapter in the local aviation industry will have been ushered in.

After nearly two decades without a national flag carrier, Uganda, a landlocked country, now relishes bragging rights over a pair of CRJ900 Bombardier aircraft after a successful handover ceremony at Bombardier's Mirabel, Québec facility on Tuesday.

Exactly one week later, the two birds will taste Ugandan air for the first time -- and what a homecoming it is expected to be!

Past mistakes had to be avoided to get here, according to works and transport minister Eng. Monica Azuba Ntege.

During the handover ceremony, she said there was "careful evaluation of several elements such as the aircraft fleet mix" to revive Uganda Airlines. The function was attended by executives of both Uganda Airlines and Bombardier Commercial Aircraft and employees who build the CRJ900 aircraft. 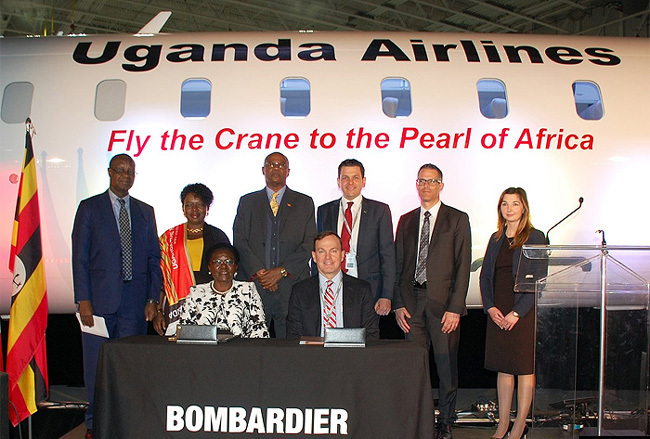 Any decision short of the approval would have meant Uganda losing $27.7m (about sh103b) that it had already deposited with Bombardier, a maker of both planes and trains.

Uganda's package, two of four planes that were ordered by Uganda National Airlines Company in July last year, are regional jets that were, according to Bombardier president Fred Cromer, designed for "excellent cost effeciency and network flexibility".

"Since its launch, the CRJ series family of regional jets has led to the development of regional markets around the world," he said on a stage mounted in front of one of the gleaming new planes during the colourful handover ceremony.

Part of Our CRJ900 cabin interior with the atmosphere mood lighting on display.

Uganda Airlines shall be the launch customer in Africa with the new and comfortable atmosphere cabin interior. #ugandaairlines#flyelthecrane#comingsoon pic.twitter.com/uPcrpsw42r


"The CRJ has revolutionalised aviation with proven effeciency, reliability and profitability. Our latest enhancement is the new ATMOSPHERE cabin, which sets new standards for customer comfort and experience in the regional jet market," he added.

It will be the first operator in Africa with this enhanced cabin experience. 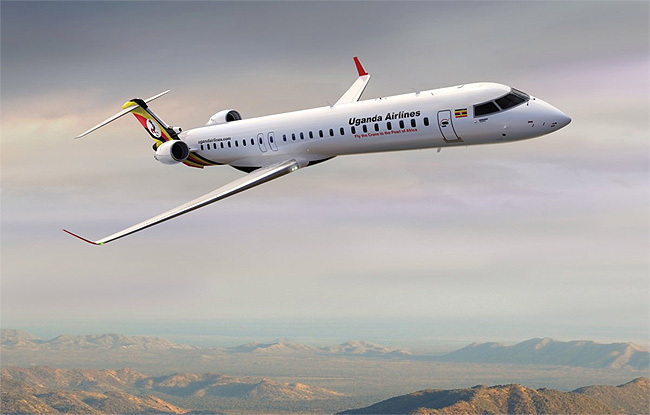 The new planes are configured for both Business and Economy Class. (Credit: Bombardier Commercial Aircraft)

It is understood the new aircraft have a two-class configuration - Business Class and Economy Class, with a seating capacity of 12 and 64 people, respectively. The two planes have successfully been registered by the Civil Aviation Authority (CAA) as 5xkob and 5Xequ.

Minister Azuba and the team she led to North America for the pivotal ceremony were received in Quebec by Uganda's high commissioner to Canada Joy Ruth Acheng.

Uganda Airlines CEO Ephraim Bagenda and works and transport ministry permanent secretary Waiswa Bageya were part of the travelling delegation, who were tasked with checking the conformity of the aircraft with contractual specifications.

Minister Monica Ntege: We thank Bombardier for developing this very beautiful aircraft. @ubctvuganda And we hope sooner or later we shall be back for more Bombardier. pic.twitter.com/kQaxGFdnvP

'Uganda has great potential for tourism'

Azuba used her speech to also sell brand Uganda, saying the Pearl of Africa has "amazing beauty" and has "great potential for tourism, and export of high-value agricultural products".

"Uganda is land-locked or land-linked and reliable air surfaces are therefore critical for exploitation of its natural endowment," she told guests.

When Uganda Airlines closed shop in 2001, the idea, according to the transport minister, was that foreign airlines would occupy the spce and "provide the critical air services". Apparently, it turned out they were not dependable -- the reason for government's move to revive ther national carrier

Here is more on what the minister said:

Twenty years ago, Uganda's national carrier - Uganda Airlines - wound up its operations. The thinking then was that foreign airlines would fill the gap and provide the critical air services. However, the government has realised that foreign airlines are not fully dependable, and has therefore cautiously  but decided to revive the national airline.

In re-establishing Uganda Airlines, it was necessary to avoid repeating past mistakes by careful evaluation of several elements such as the aircraft fleet mix to be operated by the airline. So, the choice of Bombardier CRJ900 for the regional network was a result of rigorous analysis of many competing alternatives that could serve our needs. We are here today because Bombardier turned out to be the best option for the country. We therefore applaud you Bombardier for manufacturing these outstanding aircraft. 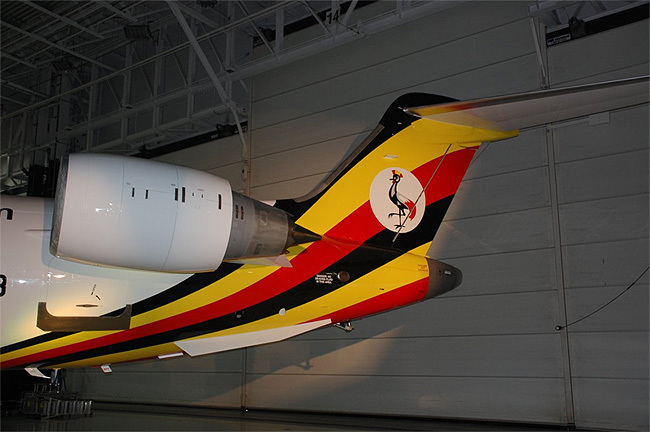 Uganda made the order for the planes last year. (Credit: Bombardier Commercial Aircraft)

'Your success is Africa's success' - Cromer

On his part, Bombardier boss Cromer said they are "deeply appreciative that the Ugandan government chose our aircraft for the revival of its national flag carrier" and underlined confidence that the CRJ900 will "contribute to Uganda Airlines' growth and success".

More from the Bombardier boss:

We are proud to deliver this first CRJ900 aircraft fitted with the atmosphere cabin. Your success is Africa's success, and we are honoured to celebrate this with you. Thank you for trusting us and let us make this the start of a great partnership. Thank you very much. 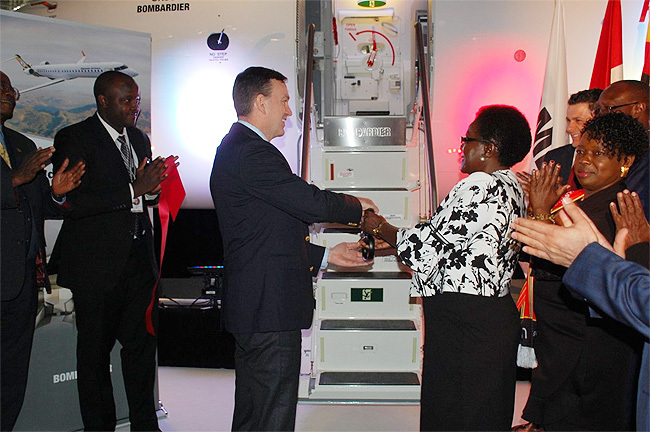 Minister Azuba called the handover ceremony for the new planes a "historic occasion".

In her own words:

On behalf of the government, my ministry and the people of Uganda, I am honoured to lead the team to accept and take delivery of these aircraft. Indeed, this is a very historic occasion. And I believe it is not the end but rather the beginning of a collaborative and enduring relationship that will be beneficial to us mutually. A relationship that enhances our socio-economic aspirations and strategic obejective to develop a sustainable aviation industry that contributes to the economic development of Uganda.

At technical level, we expect Bombardier to support the airline to ensure good performance and continuing airworthiness of these aircraft. Uganda enjoys good and stable governance, sustained high growth rate of GDP and full economic liberalisation. Uganda is an attractive destination for foreign and indeginous investors. So these factors, coupled with a growing numbers of air passengers, are a firm foundation for the growth and expansion of Uganda Airlines. And I am sure, soon or later, we will be back for more CRJ900s.

To Bombardier, the operation of CRJ900 is a new experience for Uganda Airlines. It will need your continued support to enhance competitiveness of the CRJ900 in Africa. Therefore, you should consider developing a maintenance and training facility in the region. I can confirm that Uganda will be very happy to partner with you in developing such a facility for the use of Uganda Airlines and other airlines in the region. We are ready to discuss with you the modalities of the establishment of such a facility in none other than Uganda. In conclusion, I would like to profoundly thank Bombardier for fulfulling its obligations and for organising this very colourful and historic event.

Above all, I thank God for bringing us this far. 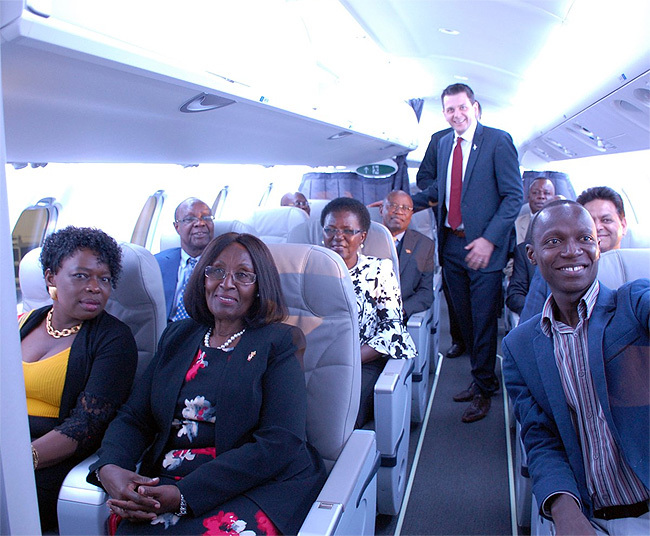 The officials having a feel of the new plane. (Credit: Bombardier Commercial Aircraft)

How the planes will get to Uganda

The planes,which have 'Fly The Cranes to the Pearl of Africa' emblazoned on their exterior, are "fully paid for", PS Bageya said in earlier footage.

"On Tuesday, we should be able to take delivery of the two aircraft. I am happy the interim board of the company (Uganda Airlines) sat on Tuesday and passed a resolution granting me the powers of attorney to receive these planes on behalf of the company, witnessed by the minister [Azuba] and the CEO [Bagenda].

"We are not supposed to fly on those aircraft. The aircraft will come with the delivery crew - pilots from Bombardier and our pilots with a few of engineers," said Uganda Airlines CEO Bagenda.

The planes will fly out of Montreal on Friday and pass through in northern Canada. Then they will head to Reykjavik, the capital of Iceland, before making their way to Maastricht in the southeast of the Netherlands. They will connect to Cairo, Egypt and then head straight to Entebbe, with ETA 3pm Ugandan time.