Home
NEWS
MEDIA
Supplements
Tenders
Notices
In 2011, Walusimbi brought acrobatics to the youth of Katwe. At first, Walusimbi described the group as “people who come together to help kids and do acrobatics.”

In Katwe, one of Kampala's largest slums, Marion Nakitende is touching the sky.

One day, she's balancing on someone's shoulders; other days, she's lifting two, three or four from the ground up. In the end, it's all the same to 16-year-old Nakitende, as long as she's doing what she loves: acrobatics.

"Ever since I started performing, my life has changed so much," Nakitende said. "I will never stop doing acrobatics. Never.

Nakitende is one of 120 children and adolescents involved with Acrobatics Circus Troupe (ACT). Six years ago, ACT was founded to provide out-of-school children with a creative outlet - but since then, it has morphed into something much larger.

Over 100 children are currently engaged in the program - and today, they perform across Kampala, Uganda and the world, doing backflips, making human pyramids, and breathing fire as both an alternative for and pathway to school. 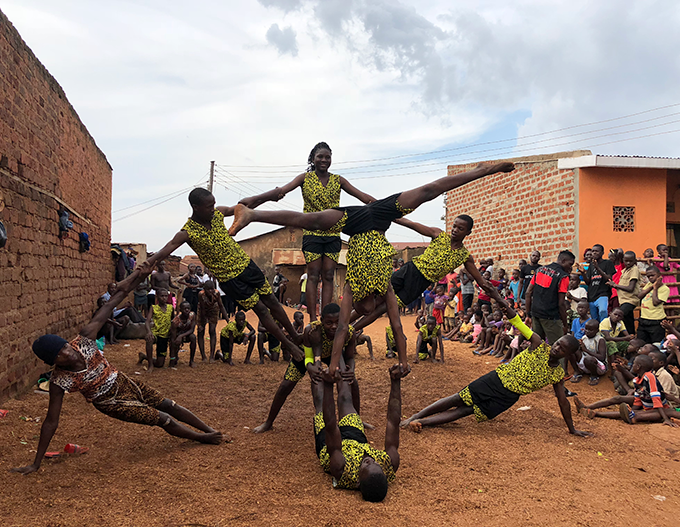 "The barriers kids have to climb just to go to school are ridiculous," said Nicole Giusti, an ACT coach. "They have to pay for school fees, school uniforms, and school supplies. And one of our kids was kicked out of school - after paying for all of that - because his hair was too long."

Such constrictions set children up for an endless cycle of poverty. Without the money to pay school fees, kids drop out of school - and without education, they have little opportunity of becoming employed.

In Uganda, only 35 percent of children who begin primary school will make it to fifth grade, according to the UN Educational, Scientific and Cultural Organization (UNESCO). Of those who do finish primary school, less than 60 percent will progress to secondary. And without school, children are left to fend for themselves during the day, and even run the risk of being arrested for loitering.

Before being sponsored by Giusti in early 2018, Nakitende was on that track.

"For more than a year, I did nothing," Nakitende said. "I would watch girls walk to and from school and wish that I could be like them. My mother kept telling me: I'll try my best, Marion. I'll try my best to send you to school. But it never happened."

After Nakitende finished primary school, the cost of her education rose. To enter school, Nakitende was expected to pay 302,000 Ugandan shillings per term - the equivalent of $239 a year. Such costs, even without the extra $50 for uniforms and school supplies, made continuing school impossible. 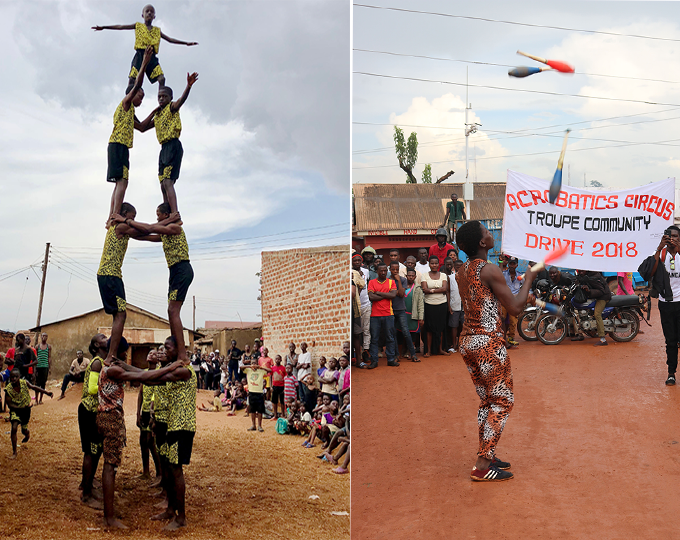 "Since I couldn't go to school, I did acrobatics," Nakitende said. "Without that…I don't know what I would have done."

Nakitende's experience is not unique, especially for the children of Katwe. Richard Walusimbi, the managing director and co-founder of ACT, said most children involved in the program come from similar circumstances. Even if they have family, Walusimbi said, they are often unable - or unwilling - to pay for their children's school fees.

As a result, children like Nakitende can find themselves without money, food or education, leading them into exploitative or crime-ridden situations. When Nakitende was forced to drop out of school, she lived with her grandmother and 19 other children in a small Katwe home. For three years, school became a pipedream - until she joined ACT and began to carve out a different future.

Walusimbi has an intimate understanding of the challenges ACT children face, in large part because he experienced them for himself. When Walusimbi was 6 years old, his father passed away from an AIDS-related illness. Less than a year later, his mother, who was also HIV positive, left the house for a doctor's appointment and never returned.

Suddenly alone, Walusimbi slept inside Katwe's sewage trenches and on top of verandas, doing whatever he could to earn money and survive. Five years later, he was linked to an organization that sought to empower youth through music. And one day, a visitor came to the group to speak about acrobats. From that moment on, Walusimbi was hooked.

Walusimbi understands the power of being involved in a constructive, creative activity. So, in 2011, Walusimbi brought acrobatics to the youth of Katwe. At first, Walusimbi described the group as "people who come together to help kids and do acrobatics."

But since then, the organization has become something so much more: over 100 children are now engaged in the program through a girls' team, a senior and a junior team.

Some have learned to juggle up to seven clubs, bottles, orbs or hats, sometimes balancing items on their heads while dancing and juggling other objects. Others have learned to run, jump and throw themselves into the air to flip backward and forward. And all have learned to build pyramids, working off one another to balance as high as 20 feet in the air.

Over the past year, ACT has shifted the way it conducts performances. In the past, the group would spend an entire day performing for whatever donations they could get. At times, that could be as little as 2,000 Ugandan shillings - just over 50 US cents.

After restructuring their business model, however, the group is now focusing on paid performances. They use that money to sustain the program, purchasing first aid kits, uniforms, mats and safety equipment, along with food and school supplies to help those in school stay in school.

Still, this funding is limited. Though ACT hopes to one day send all the acrobats to school, at the moment, only a select few are being supported by individual sponsors. The real performance money comes from outside Kampala - something that has materialized through competitions and partnerships within the last few years.

Adolescent acrobats have performed in countries like China, South Africa, Benin and the Ivory Coast, securing opportunities that allow them to earn much more. After performing in China, for example, one acrobat saved enough to build a small house for his family. Another is now paying for his siblings' school fees.

"Through my own experience, I learned that acrobatics isn't just something kids can do for fun," Walusimbi said. "It's something that gives youth hope and a physical challenge, along with a way to make money and gain opportunities by productive means."

In Nakitende's eyes, it doesn't matter how much she earns while she performs. What matters, she says, is that she's learned the skills that could take her away from Katwe and spiral her toward something bigger. She has dreams of using her acrobatics to travel the world, and to make something of herself, she said.

"I used to be a girl who didn't have anything," Nakitende said. "Now, it's different. Now, I have something."

The writer is a freelance journalist who lived in Kampala from 2017-2018.