Home
NEWS
MEDIA
Supplements
Tenders
Notices
While water dams and reservoirs produce the much needed renewable energy, provide water for agriculture, industrial use, control river flow and flooding, a new study by scientists has found that they can potentially worsen the negative impacts of droughts and water shortages.

While water dams and reservoirs produce the much needed renewable energy, provide water for agriculture, industrial use, control river flow and flooding, a new study by scientists has found that they can potentially worsen the negative impacts of droughts and water shortages.

KAGADI - Kaswa is a small village along river Muzizi, 285 kilometers west of Kampala, in Kagadi district. Up to 17 hectares of this village sit on a site that will, in the next three years, be a power dam.

Villagers on this portion of the village are part of the 829 people that will be displaced by Muzizi power dam, a 45 megawatts hydroelectric power project by the government of Uganda.

"In all, the project will need 473 hectares," says Vincent Kisembo, the Monitoring and Evaluation Specialist at Uganda Electricity Generation Company Limited.  And those to be displaced, "will be well compensated," maintains Kisembo.

But Jennifer Mbabazi, the woman member of parliament for Kagadi district says the affected persons that had their property valued in the past, "have undergone untold suffering."

"They were forced to sign valuation forms. Their properties were undervalued and now they are not able to acquire new land for resettlement," says Mbabazi.

Dispute over acquisition of land for dam construction is not unique to Muzizi power dam. It remains one of the contentious issues worldwide.  For instance, the famous Grand Ethiopian Renaissance Dam on River Nile in Ethiopia displaced up to 20,000 people; the Upper Atbara and Setit Dam Complex on river Atbara inaugurated by the Sudanese government in 2017, displaced up to 30,000 people. Here in Uganda, close to 300 people that lived in the villages of Akurudia, Karuma, Awoo and Nora were displaced to pave way for construction of Karuma power Dam on river Nile. 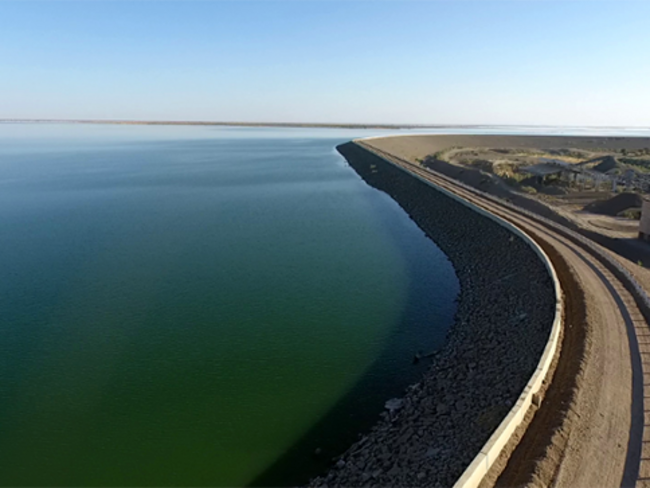 Construction of Upper Atbara and Setit dam complex on river Atbara in Sudan displaced up to 30,000 people. Photo by Fredrick Mugira

Water use and access in river basins are tied intrinsically with land issues. Large-scale dams and reservoirs diminish traditional lands for local people, adding to the skyrocketing numbers of refugees fleeing conflict and heightening land pressures in receiving communities.

While water dams and reservoirs produce the much needed renewable energy, provide water for agriculture, industrial use, control river flow and flooding, a new study by scientists has found that they can potentially worsen the negative impacts of droughts and water shortages.

The study published in Nature Sustainability at the end of last year is the result of three years of research collaboration of ten drought scientists from eight different countries coordinated by Professor Giuliano Di Baldassarre of Department of Earth Sciences at Uppsala University in Sweden.

In this Q&A article, Fredrick Mugira who, in 2017, worked with a British journalist Benedict Moran to extensively document at New Vision Online how construction of Gibe III dam on river Omo, in Ethiopia affected the lake and the El Molo people - a tiny tribe with a population of less than 2000 in Kenya that depends solely on fish from Lake Tana, interviewed  Professor Giuliano about the new study that he coordinated.

Fredrick: How can dams and reservoirs constructed to alleviate droughts and water shortages illogically make them worse?

Prof Giuliano: We argue that there are two counter-intuitive dynamics that should be considered when expanding reservoirs: supply-demand cycles and reservoir effects. Supply-demand cycles describe instances where increasing water supply enables higher water demand, which can quickly offset the initial benefits of reservoirs. Reservoir effects refer to cases where over-reliance on reservoirs increases vulnerability, and therefore increases the potential damage caused by droughts. We mean that reservoirs meant to alleviate the effects of droughts and water shortages can in fact make them even worse. This is counter-intuitive and often unexpected.


Fredrick: What are some of dams and reservoirs in Africa that inspired your paper?

Prof Giuliano: The Grand Ethiopian Renaissance Dam is explicitly mentioned in the paper as one of the examples of new dams and reservoirs that are being planned and built in the Global South.


Fredrick: Several new dam projects are planned and others are underway across river Nile basin where about 90 percent of electricity generation comes from hydropower, is it viable to recommend less reliance on large water infrastructure, such as dams and reservoirs in this region?

Prof Giuliano: We cannot generalise, as each case is different. Are reservoirs always bad? No, they are not! Our point is when different alternatives to cope with droughts and water shortages are being evaluated, one should be aware of the potential unintended effects associated with increasing water storage. Each alternative will then have some social, environmental and economic costs as well as some social, environmental and economic benefits for different social groups. In an ideal world, all these aspects should be considered carefully, within a transparent and democratic process in which both stakeholders and experts from different disciplines are actively involved.


Fredrick: Your study uses US examples, how applicable is it to the situation in Africa?

Prof Giuliano: We analyse both global and local datasets, and describe generic dynamics. In fact, our paper was inspired by many calls from more dams and reservoirs in many African countries based on the traditional notion that "we must increase water availability to satisfy a growing water demand". I think that this narrative remains pervasive also because there are major knowledge gaps in the long-term effects (including unintended consequences) of reservoirs on the spatiotemporal distribution of both water availability and demand. This is why we propose an interdisciplinary research agenda to unravel the interplay between hydrology, society and water infrastructure.


Fredrick: What do you mean by spatiotemporal distribution?

Prof Giuliano: I mean how water availability and demand change in space with some groups benefiting more than others and in time with climatic and socio-economic changes playing a role.


Fredrick: Basing on your findings, what measures should governments in the Nile basin that regularly face floods and severe water shortage do to ensure the dams and reservoirs they construct do not worsen these calamities?

Prof Giuliano: Besides the aforementioned participation in water related decisions, it is important to avoid heavy reliance on infrastructure and work more on soft measures. They include, for example, early warning systems and building codes for floods, less water-demanding agriculture for droughts.


This reporting project was made possible through the generous support of the Pulitzer Center on Crisis Reporting.