Farmers in Bunyangabu district will soon benefit from a sh43b irrigation scheme in to be constructed in Rwimi sub-county by government this financial year.

Adolf Mwesige, the minister for defence and Bunyangabu County Member of Parliament, during a farmer's field day on Saturday at Rwimi sub-county, said that the irrigation scheme will help farmers water their crops seasonally to boost production.

Mwesige said that the irrigation facility will help boost rice and maize production in the parts of Rwimi and asked the farmers to get organised so as to benefit from the project.

"The irrigation scheme which will be constructed this financial year will boost crop production because many farmers in Rwimi have been suffering loses during the dry season," Mwesige said.

He said the irrigation scheme comes at a time when most of the farmers in the area have been dealing with the effects of the dry season. During this speall, farmers trek several kilometres to the valleys to get water for irrigation. 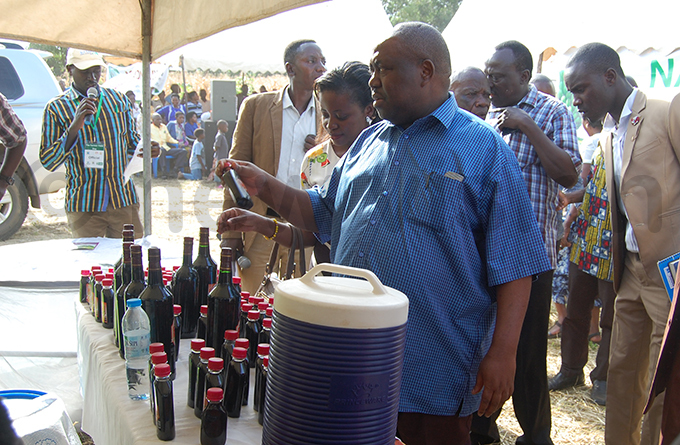 Mwesige checks out wine locally produced by farmers from bananas in Bunyangabu. Photo by Wilson Asiimwe

Mwesige said that National Agricultural Research Organisation (NARO) had teamed up with farmers to help rejuvenate banana production in the different parts of the district.

"Due to shortage of agricultural extension workers, NARO has mobilised model farmers who will act as village agents and their plantations will be used as demonstration farms for other farmers to learn," Mwesige said.

Mwesige said that with support from the South Korean government, the district has constructed a modern banana loading bay at Kasunganyanja Market.

"Many farmers have been forced to sell their bananas cheaply because they fear loses as the bananas might rot but we are going to put up a cold chain at the loading bay which will help store the bananas for long," Mwesige added.

He said that under the rural electrification program, most villages in the district have been connected with electricity and asked farmers to embrace modern agriculture.

"Recently I gave out rice hurlers to rice farmers in Rwimi and we have also constructed maize milling machines to help process their products and get more money," Mwesige added.

Tumukuratire said that the project which is currently being implemented in the districts of Bunyangabu, Nakaseke and Isongiro, is aimed at improving banana production. 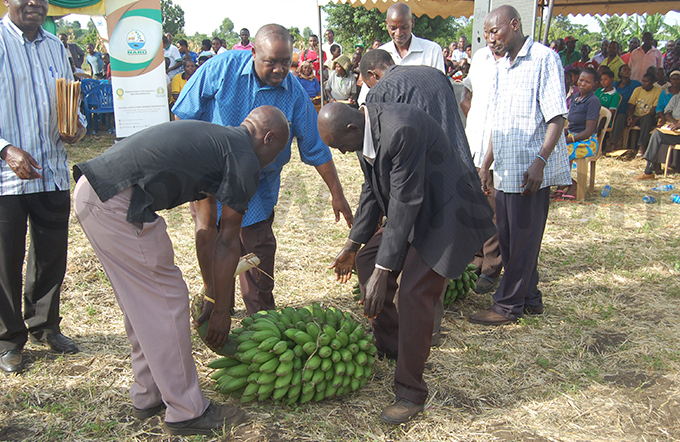 He said that under the project, they have established adhoc banana multi stakeholder innovation platforms that include those at the sub-county and zonal levels and also created district adaptive research teams.

"We are working with NARO to ensure that farmers get adequate training and skills in order for them to get good bananas which can attract good prices," Tumukuratire said.

He said the committee and the research team would coordinate with the banana stakeholders and identify the challenges faced by each of the categories of farmers and report to relevant authorities for intervention.

Jane Asiimwe the Bunyangabu resident district commissioner welcomed the innovation, describing it as a good gesture. She said the initiative will boost efforts by the government to rejuvenate banana production in the district.

Evarist Byaruhanga, one of the banana farmers in Kakoga, Rwimi sub-county said the innovation will help farmers adapt modern farming practices that will boost banana production.

"We have been facing many challenges like the banana bacterial wilt disease which has greatly affected banana production, but through the new innovations of research and trainings, it is being kicked out," Byaruhanga said.