“If you listen to some of the local radio stations, the language which they use when they are describing women is terrible."

KAMPALA - The minister in charge of general duties, Mary Karooro Okurut, has voiced her dissatisfaction with the way she says local media portray girls and women.

Speaking during a mentorship workshop in Kampala earlier this week, Karooro said lack of information and the pre-existing culture contribute to the negative portrayal of females in the media.

"If you listen to some of the local radio stations, the language which they use when they are describing women is terrible," she said.

"They use words like the ‘ka' woman or the ‘ka' girl was raped - This is very demeaning."

The minister made mention of te lack of solidarity by some females.

"Not all our women are aware that they are in bondage. You will find them unfairly critising women. It is because they are not aware of women's rights.

The well-attended workshop was organised by International Association of Women in Radio and Television (IAWRT) and held in Bugolobi.

Karooro further implored journalists to focus on the personality and the character of the person not their appearance in their reporting.

She also urged female journalists to be ambassadors in exposing sexual perpetrators since women typically shy away from giving such stories.

In her delivery, she attributed the negative portrayal of women to limited number of women engaged in reporting, giving sources and decision-making in media. Nassanga, who has decades of experience in the journalism field, called for a balance in reporting.

Journalists should report on both groups of women in society - the elite and those lower in the status quo.

"Every persepective needs to be known," she said.

The professor raised the need to increase women's voices and opinions.

According to research made by Global Media Monitoring Project in 2015, women are underrepresented in news subjects.

The research found that at 51%, female journalists took the lead in covering science and health stories compared to politics and government as covered by mails.

Meanwhile, Karooro pledged to lobby for support towards IAWRT to carry out research on the portrayal of women in local stations to back up their claims and in turn find a solution to the problem of stereotyping.

Eunice Nankwanga Kasirye, the chairperson of IAWRT Uganda Chapter, said that the mentorship workshop is aimed at enlightening media women what should be done to understand and overcome the stereotypes faced in the media. 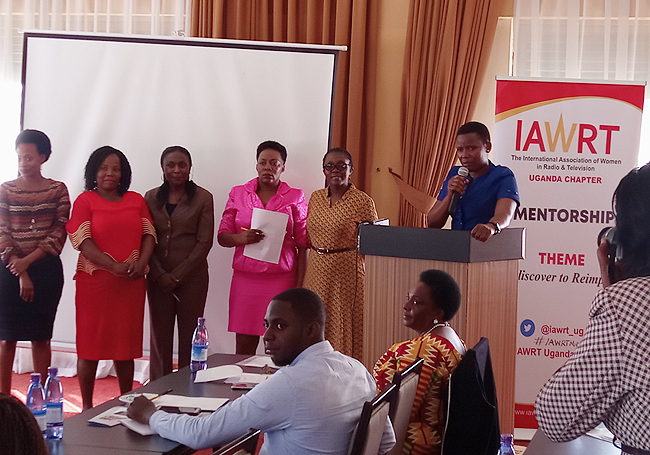