Home
NEWS
MEDIA
Supplements
Tenders
Notices
At past midnight, as Michael Mutunzi (S.3) retired for the night, he heard his colleague Charles Walugembe shouting ‘danger, danger! get up. Someone is spilling the dormitory with petrol, run’.

At past midnight, as Michael Mutunzi (S.3) retired for the night, he heard his colleague Charles Walugembe shouting ‘danger, danger! get up. Someone is spilling the dormitory with petrol, run’.

The fire, said to have started a few minutes after midnight, also left over 30 badly injured, while others escaped with minor burns among other injuries. 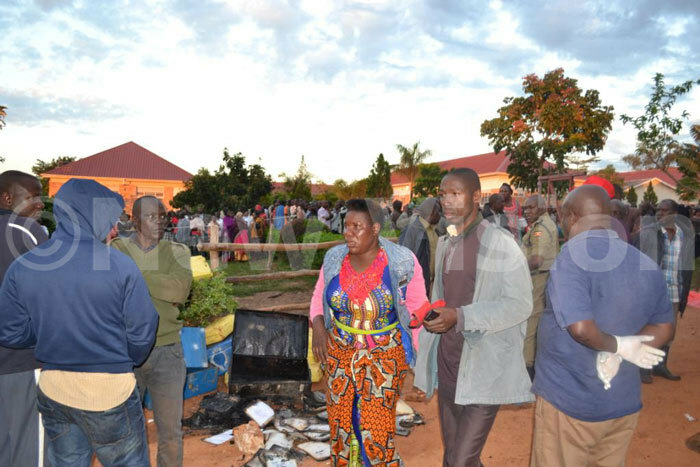 But the Police and local rescuers fear that the death toll may rise from those in very critical condition. 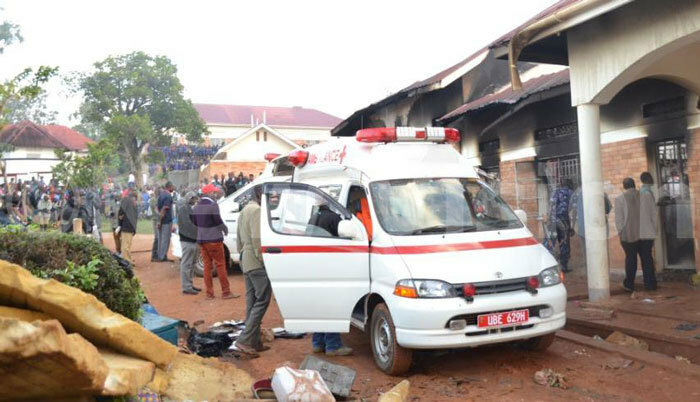 Ambulance taking the injured to hospital

It is still unclear how unknown people gained access to the school with strong perimeter wall fence around it and torched the three boys' dormitories housing more than 60 students.

Ben Nuwamanya, the Rakai District Police Commander, said the arsonists locked the dormitory doors with padlocks to ensure none of the occupants escaped the inferno. 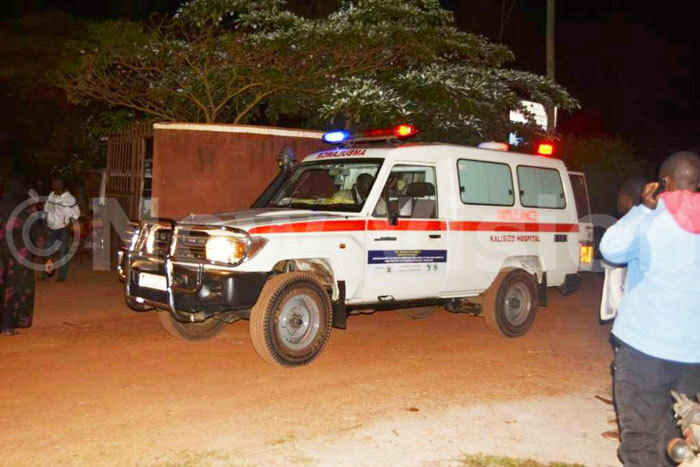 He said that the bodies, which were burnt beyond recognition were taken to Mulago Hospital in Kampala for DeoxyriboNucleic Acid (DNA) test before handing them to their respective families.

Eye witness told New Vision they were attracted to the scene by the constant screaming and alarms from the school. Tadeo Wamala Kabumbuli, neighbours said he could see the fire flames and billowing smoke from a distance of half-a-kilometre. 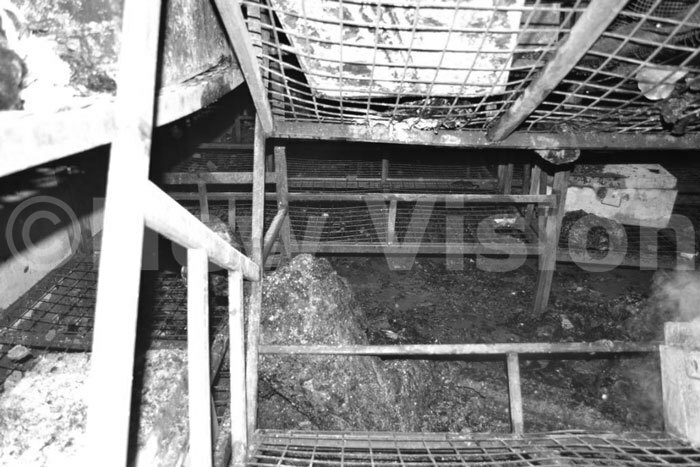 One of the bodies stuck in the beds after the inferno

According to Gerald Karasira, the Kifamba sub-county councillor, students and local rescuers struggled to unlock the padlocks.

He said several had died by the time they broke into the dormitories, while others suffocated due to heavy smoke that filled the rooms.

Karasira added that the fire brigade trucks arrived in the morning when fire had consumed nearly all properties. 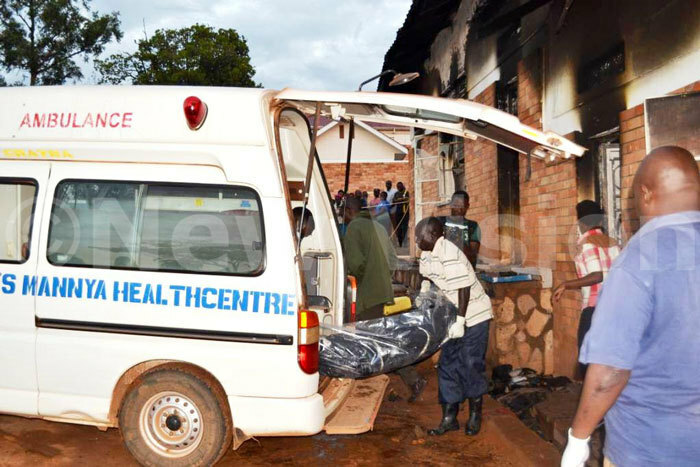 "We were fighting the fire with sand, little water and bricks. Had the firefighting truck been near within the district, maybe we would have saved lives and property," he argued.

Latif Zaake, the Greater Masaka Regional Police Commander, said they have arrested the security guard who was on duty that night to aid ongoing investigations.

He said they are still investigating to establish the actual cause and the perpetrators.  He further blamed the school for having expired fire extinguishers that could not help to put out the fire.

However, Henry Nsubuga, the school's headmaster, said this is the first time to have such an incident.

He further suspects a group of six S.4 students that was expelled from school for misconduct, including bullying S.1s to be behind the incident. 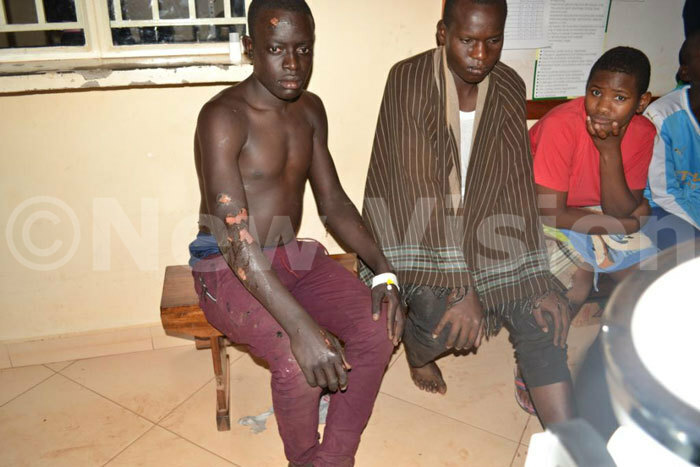 Some of the survivors at Mannya Health Centre

Weeping and Mourning
Students and family members of the deceased who had camped at the school wailed and mourned as Police officers wrapped and carried away the charred bodies.

Affected family members asked for the bodies, but the Police declined to release them. "Give me my son's body because you failed to protect him," Remegious Tamale's mother Aliganyira Theodora wailed.

RPC Zaake said they will do so after the DNA tests to avoid giving the bodies to wrong families. 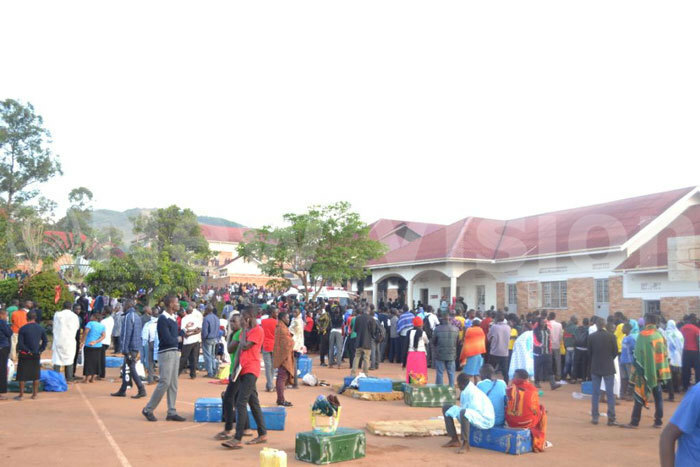 Students stranded in the school compound after the incident

According to Christine Nanyanzi, the In-Charge Kalisizo General ward at Kalisizo Hospital, all the 11 students that were admitted are recuperating.

Prior warnings
A police detective at the scene who preferred anonymity said that few weeks back, a team of officers went to the school to train first aid drills.

However, they advised the school administrators to replace new fire extinguishers since the ones in place had expired and could do nothing to put out the fire.

He added that they advised them to reduce the burglar proofs in the windows to allow easy escape in case of danger, which the administrators ignored.

"If they had replaced the extinguishers may be they would have save the lives of the ten students," he explained. 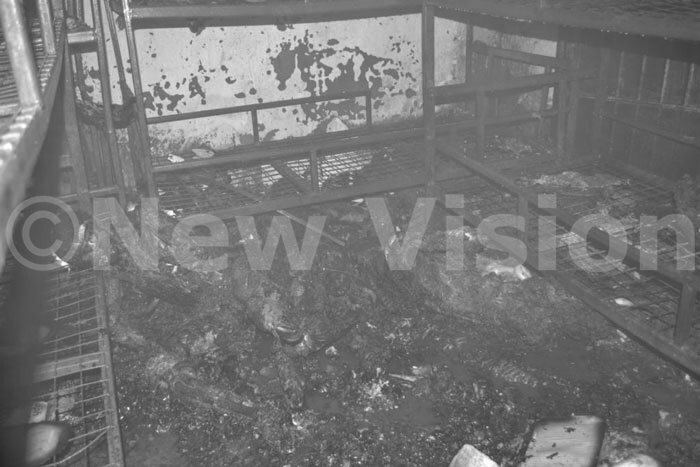 Survivors
At past midnight, as Michael Mutunzi (S.3) retired for the night, he heard his colleague Charles Walugembe shouting ‘danger, danger! get up someone is spilling the dormitory with petrol, run'. 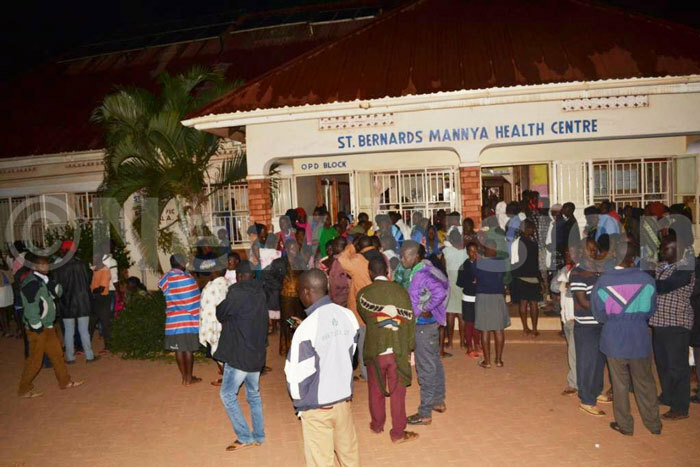 Students and residents at the Mannya Health Centre

"Within a split second, I saw two colleagues running and covered in flames. We shouted. We ran to the door only to find it locked outside," he said.

He added that he was lucky being at the part where the arsonists did not reach.  Others, including Kennedy Mweruka, Sande Peter, Allan Ntwatwa, Ronald Matovu and others were rescued with minor injuries.

"This is the shock of my life. The incident has left memories which will never be erased from my mind," Mweruka said.