(All photos by Maria Wamala)

KAMPALA - Tension engulfed Parliament on Tuesday as legislators turned up in unusually big numbers to make a final decision on an amendment to Excise Duty Bill to cut the three-month-old tax on mobile money.

After disposing of other business, the Deputy Speaker of Parliament, Jacob Oulanyah, took the House to the committee stage at around 3:25pm to take a vote on the Bill. The voting was on a motion moved by Ndorwa West MP Wilfred Niwagaba to completely scrap the 1% on mobile money, instead of reducing it to 0.5% as the Government wanted.

But the MPs, mostly from the Opposition side, objected to the results and demanded that voting be by roll call, where each MP stands and announces whether they support scrapping the tax or reducing it.

The Government Chief Whip Ruth Nankabirwa attempted to persuade Oulanyah to reject the idea of roll call. But Oulanyah ordered for the voting to be repeated by roll call to avoid any accusations. Oulanyah said he had also detected some irregularities in the voting. 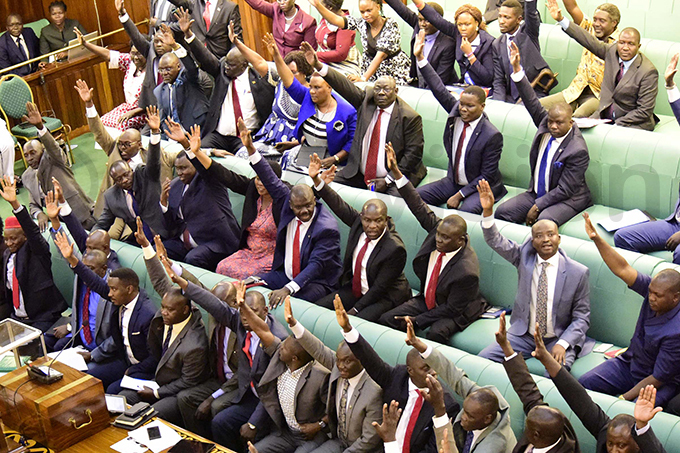 As the second round of voting was underway, more MPs came into the chambers to participate in the exercise.

The number subsequently increased to 288 MPs from 237 who had participated in the first round of voting.

When the results were finally announced, those who had voted in favour of scrapping the tax were 124 against 164 who voted to retain, but reduce the tax to 0.5%. The tax is, however, imposed on only the withdrawal of mobile money transaction.

Several NRM MPs also went against their party position and voted to scrap the tax completely, considering that there are about 60 Opposition MPs and slightly more independents. But a big number of independents are NRM-leaning.

During the debate on the Bill to remove the presidential age limit, only 27 NRM MPs voted against their party position of supporting the Bill. During the vote on the mobile money tax amendment, a number of members were seen leaving the House.

Notable among those who left was state minister for ICT Aidah Nantaba who consequently missed the voting. On the Opposition side, Bukedea Woman MP Anita Among voted in favour of retaining the tax at 0.5%. Although she is an independent MP, Among previously belonged to the Forum for Democratic Change. She also voted in favour of removing the presidential age limit in December last year.

However, the Bill will have to be assented to by the President before it takes effect, which may be in a matter of days or weeks. Until then, Uganda Revenue Authority will continue levying 1% from all the money withdrawals.

The sh200 per day social media excise duty, however, is not affected by the amendment passed on Tuesday. While considering the national budget and tax Bills in May this year, Parliament passed the Excise Duty Amendment Bill, imposing a tax of 1% on all mobile money transactions including sending, withdrawing, and depositing.