Ronald Otile continued to thrill the local golfing fraternity as he marched to his third Uganda Open title at the Entebbe course on Saturday.

As he celebrated his 23rd birthday, Otile beat Kenya's John Karichu by a stroke in another thrilling, dramatic and nervy finish to the Castle Lite sponsored tournament; to win his third Uganda Open title and joining Stephen Birungi and Deo Akope who  won it three times before since 1997.

Legendary golfer Sadi Onito (RIP) is arguably Uganda's greatest golfer of all time having won the event a record 12 times, a feat he achieved in 20 years from 1976-1996.

The atmosphere on the Entebbe course was similar to last year's at Kitante where he lost to Ronald Rugumayo after a three-hole sudden death play-off.

Otile returned 285 gross over the four rounds edging not only Karichu, but also Edwin Mudanyi, who saved the best for last producing the best day's score of 68, to tie in second place with Karichu with 286 gross each.

Otile had a bad start and had by the 6th hole given away his third round, three-stroke lead and was by the 12th hole trailing by five strokes, having scored 9 on the par-5, hole No. 11, with six holes to play. By now, most of his followers in the gallery that was following the action had all given up on him as he continued to struggle on the day. 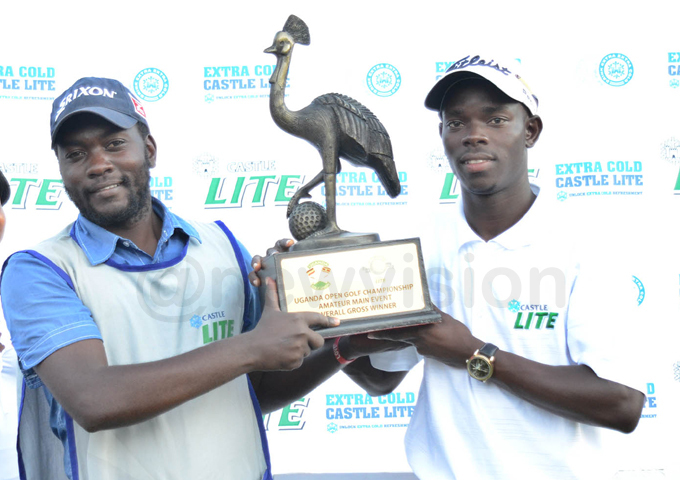 But a par on hole-No.13 and subsequent birdies on holes; 14, 15, 16 and on the 18th ensured the University of Pretoria student won to send the spectators into jubilation.

"Today was a tough day, I struggled a little bit on the greens and my putting wasn't on point as expected, but I managed to work it out with my cuddie, who is the best in East Africa. Hole No. 11 wasn't friendly to me today, it tortured me and cost me so much and it put me under a lot of pressure but because I'm used to such a competition I remained calm and knew I could recover. It required someone with a Lion's heart to do what I did. I decided to attack after that misfortune because Karichu is a good player," Otile stated before advising other youngsters to stay focused, stay in school and work hard in order to achieve.

Karichu's out of bounds second shot on hole-No.15 was his main undoing on the day though by this time he had to contend with a rowdy gallery of spectators who sometimes went overboard jeering his bad shots, which piled even more pressure on the rather calm veteran golfer.

"They should address on how to support. This is a gentleman's game and one's bad shot should not be the basis on which to show support. Otile is a gentleman though his game wasn't good today but he fought back nicely," Karichu who might return to Uganda as a pro said. As Otile completed his hat-trick, his cuddie Douglas Mugisha was claiming his fourth Uganda Open title following an earlier one he won with Kenyan professional golfer Richard Ainley in 2009 on the same course.

"After his 9 strokes on hole-No.11, I told him to calm down and forget about Karichu's lead but focus on playing the course in the remaining holes, otherwise the pressure would have been much because he was trailing by 5 strokes teeing off No.12," Mugisha noted.

"So when we go birdies on holes, 14, 15 and 16 the pressure shifted to Karichu. We decided to concentrate on our game so that he could not benefit from any of our mistakes again and fortunately whenever Otile played well he continued to falter, going out of bounds on hole No.15; we knew if we took two strokes off his lead, we shall be back in contention and that's what happened," Mugisha stated.

A birthday cake for Otile was cut by him and representatives of the different sponsors and served to guests at the ‘19th hole'.

As per tradition the top ten amateurs will compete in the Professional's Open that starts on Tuesday with a Pro-Am tournament where the top professional will pocket sh5m.