Home
NEWS
Media
Supplements
Tenders
Notices
While addressing the media at the Police headquarters in Naguru, Nakawa division, Kayima said the Police are working with sister security agencies to ensure that there is law and order.

While addressing the media at the Police headquarters in Naguru, Nakawa division, Kayima said the Police are working with sister security agencies to ensure that there is law and order.

Kyadondo East MP Robert Kyagulanyi aka Bobi Wine returns today and will be escorted by heavy security to thwart processions, which the Police expect.

They Police have deployed to block any attempts to make a procession from the airport. They have also limited access to the airport by people, especially journalists.

Security has mounted roadblocks on Entebbe highway to ensure materials such as T-shirts and banners related to Bobi Wine procession are not taken to the airport.

Police authorities say there will be heavy deployment in Kampala and Wakiso district, to deter any likely demonstrations that might disrupt business and traffic. 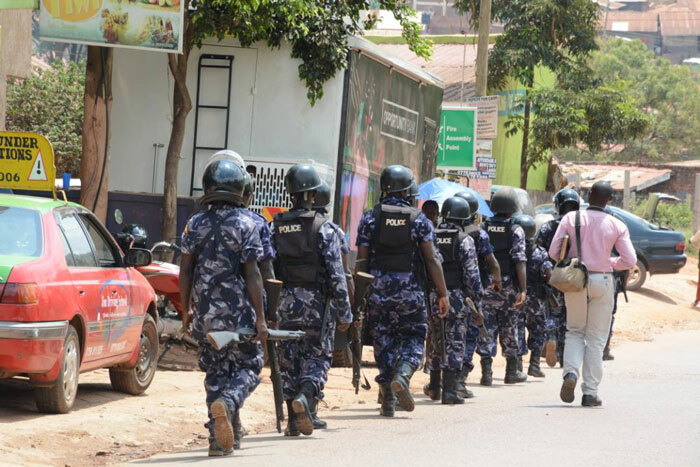 Police patrolled most parts of Kampala and Entebbe. Photos by Eddie Ssejjoba

The new deployment covers the Kampala-Entebbe highway and several round-abouts on the Northern Bypass, between Mandela National Stadium and Busega in Wakiso district. Security forces have also set up command posts at both ends (Entebbe town and Kasangati), supervised by traffic, counter terrorism and field force Police unit commanders. 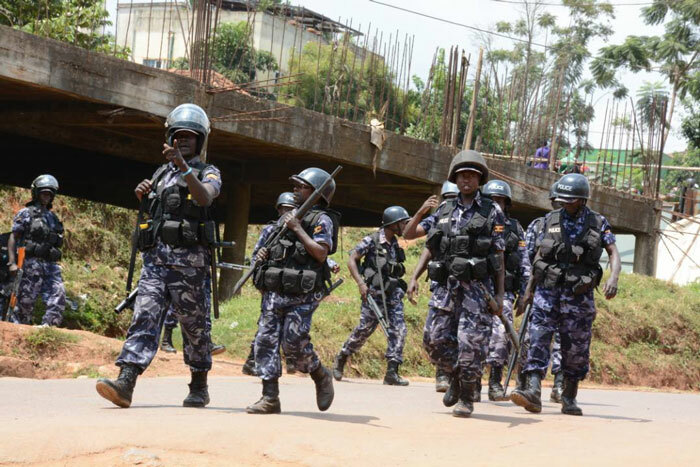 Yesterday, Police spokesperson Emilian Kayima announced security guidelines for the return of Kyagulanyi. While addressing the media at the Police headquarters in Naguru, Nakawa division, Kayima said the Police are working with sister security agencies to ensure that there is law and order. He said the Police had received confirmation that Kyagulanyi is slated to return today via Entebbe. 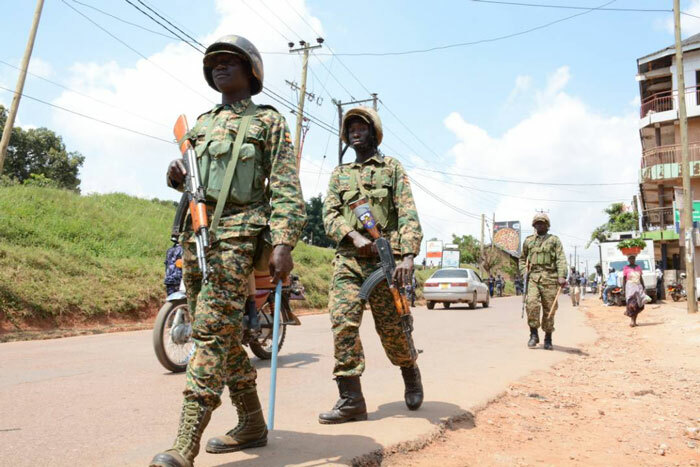 Police was joined by the army to block any procession

Kayima said Police will further ensure law and order for all road users and there will be no unlawful rallies, processions and assemblies. “Any activity that entails a public gathering must conform with the Public Order Management Act. Kyagulanyi is expected to comply with the traffic guidelines and regulations,” Kayima said. 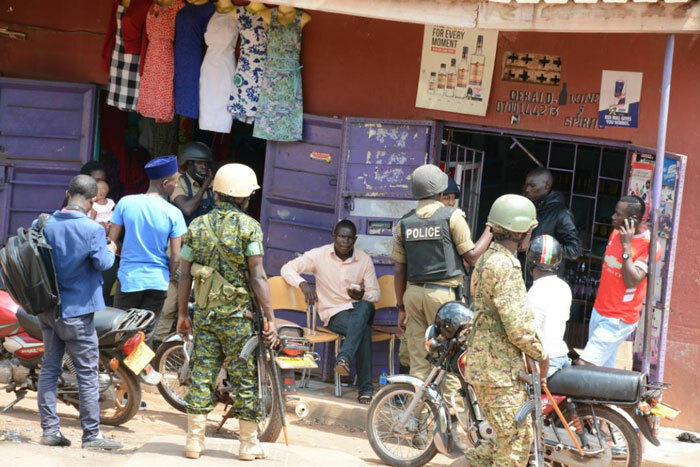 Deployment was done even at his former music base in Kamwokya, Kampala

He said security agencies received intelligence of a countrywide mobilisation of different groups of people who are being given red T-shirts and posters to participate in processions and assemblies to receive the legislator. “No member of his family has worked out a mechanism for these intended processions and assemblies. As such, they are unlawful and would disrupt normal business activities, including movement of people to and from the airport,” Kayima said.

“A section of the public is concerned about such unlawful and unregulated activities.” Kyagulanyi is among the 34 politicians and civilians that were arrested and charged with treason over allegations that they orchestrated violence during recent campaigns in Arua byelections, including pelting the presidential motorcade with stones. 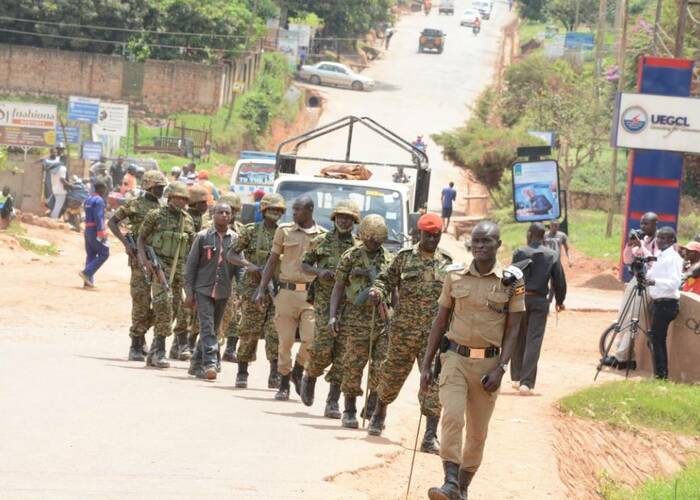 The group was granted bail by the High Court. Meanwhile, Kyagulanyi’s lawyers, Asuman Basalirwa, Benjamin Katana and Andrew Karamagi, said at the airport, he will be received by his lawyers and not his family members as Police had communicated.

Basalirwa noted that from Entebbe Airport, Bobi Wine is expected to visit his grandmother Kyosimba Onaanya at Najjanankumbi on Entebbe Road. “His grandmother went into coma when she heard that her grandson had been severely beaten.

She believes that her son died and we are hiding the news from her. That is why Bobi Wine has decided to visit her first,” Basalirwa explained. According to the lawyers, from Najjanankumbi, Kyagulanyi will proceed to Kamwokya, his family home, where he will meet family members, including his wife and children, for lunch. 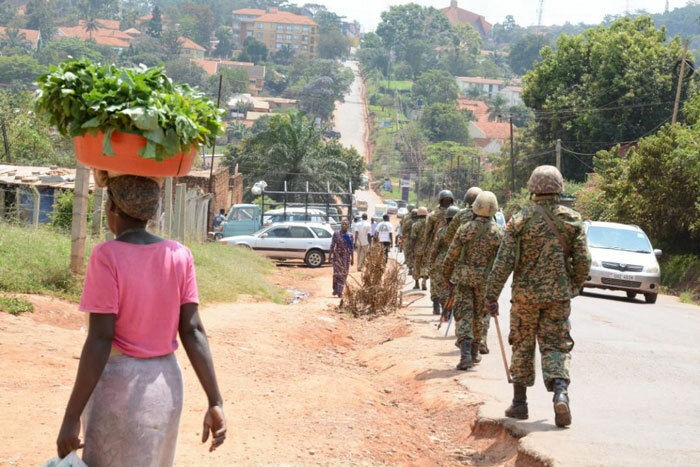 He added that thereafter, Kyagulanyi will decide whether to join his electorate in Kyadondo East or go to Parliament. Katana said it is illegal for Police to prescribe the way people should express their happiness. He noted that Police’s major role is to ensure people keep law and order and offer security to Ugandans as they express themselves.

“Anybody planning to cause violence and chaos is a wrong person and most of them are masqueraders, not true supporters of Bobi Wine,” he said. 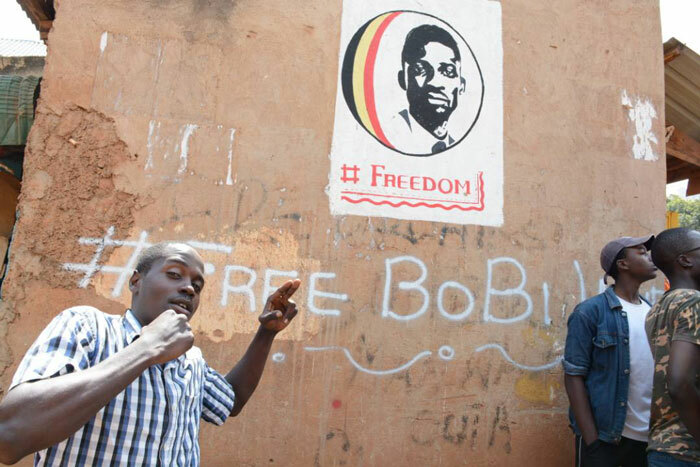 UHRC calls for restraint
The Uganda Human Rights Commission (UHRC) has called for restraint as Kyagulanyi returns. Addressing journalists at the sidelines of the fifth annual national conference on economic, social and cultural rights at Makerere University Main Hall yesterday, the commission’s chairperson, Med Kaggwa, urged Bobi Wine’s supporters not to provoke the Police as they celebrate his return and to follow instructions. Kaggwa also urged security forces to act with restraint, to avoid scenes that may taint the image of the country.