According to the 2016 Uganda Demographic and Health Survey, Uganda registers over140,000 women living with fistula.

During this time, she experienced untold suffering and stigma. She also lost her marriage when her husband chased abandoned her.

However, today, she demonstrates no trace of her former ordeal after treatment. Agwanga was treated from Mulago hospital in 2014.

Following her recovery, the 41-year-old started a survivors group where she creates awareness in the community on the dangers of early and child marriages. Agwanga also has livelihood projects such as raring goats and making soap.

According to the 2016 Uganda Demographic and Health Survey, Ugandais greatly affected by the health problem, with over 140,000 women living with the condition, and 1,900 new cases reported every year.

The Health ministry says the country is ranked third in the world in terms of the number of obstetric fistula cases.

Agwanga was among the 104 fistula survivors who received bicycles last week at Soroti sports ground, courtesy of The Association for the Rehabilitation and Re-orientation of Women for Development ( TEREWODE), a NGO, pioneering best practices to eliminate obstetric fistula in Uganda.

"I am extremely grateful for the bicycle. I will be able to help more women. I cannot thank TERREWODE enough," Agwanga said after she recieved her bicycle.

The executive director, TEREWODE, Alice Emasu Seruyange, said the bicycles are to help the survivors intensify community mobilisation and awareness, focusing more on supporting those who need treatment and social integration services.

"We took time to understand the greatest need of the survivors and the consensus was that transport was a limiting factor into their contribution to the fight.

"We gave them bicycles to ease their work. Participants are coming all across eight districts of Teso subregion," she said.

Majority of them are members of the fistula solidarity group run by women who suffered fistula, got treated and rehabilitated into the community.

They went back and formed a group which acts as a social support mechanism to those who are affected and those at high risk of fistula, to eliminate the disease and improve maternal and child health.

Emasu said the community has a responsibility to support the campaign to eliminate obstetric fistula in Uganda. 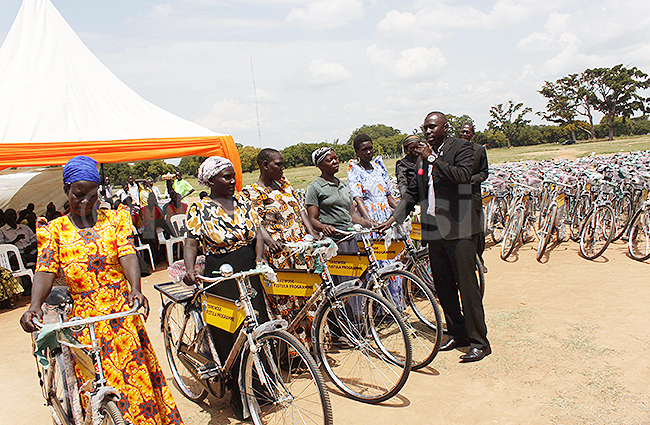 Some of the women that recieved bicycles from TEREWODE. (Credit: Elvis Basudde)

Instead of waiting for already made things or to blame government or authorities, she said the community must directly play a role to mitigate the impact of fistula among women.

"Fistula is fully preventable when all women and girls have access to high-quality, comprehensive sexual and reproductive health services. Let us join forces to eliminate this global injustice, "she said.

She regretted that this condition has affected many homes. Some men have left their wives, and many families are suffering in silence.

She retaliated that the community can work closely with TERREWODE to promote the prevention, repair, rehabilitation and re-integration of women and girls who experience obstetric fistula in the rural areas of Uganda.

TERREWODE was founded in 1999 and is the first organisation to break the silence on obstetric fistula in Uganda.

"The mobilisation efforts for the condition began in Soroti in the districts of Katine, Bululu and Kasilo. The movement has grown globally, many leaning from us," Emasu added.

She noted that new obstetric fistula cases are emerging and they need to be identified and supported.

She also called upon stakeholders to take a deliberated effort to ensure that there is rehabilitation, reconciliation and reduction of stigma discrimination and trauma.

Emasu said obstetric fistula most commonly occurs among women who live in remote rural areas and those who give birth without access to medical help.

Daisy Aigi, the district community development officer noted that fistula is a condition that makes women and girls keep away from development initiatives and she thanked TERREWODE for breaking the silence.

"TERREWODE's interventions had helped many women to open up and seek care. I hail you for contributing to the provision of social services for women and girls.

"It is unfortunate that the district has few partners in social provision and in particular, support for fistula survivors," she said.

The assistant chief executive officer, Henry Obal, who was also the guest of honour, hailed TEREWODE for being the first organisation to come forward and address fistula among mothers and sisters as well as support survivors.

"Iappreciate the survivors for their great courage in breaking the silence. They are true champions. Fistula has affected many young girls and women. TEREWODE has supported 4000 of them access treatment to cure the condition," he noted.