Home
NEWS
MEDIA
Supplements
Tenders
Notices
The tea farmers want to share their concerns and challenges in the industry including government’s failure to pay for supplied tea seedlings.

KABALE - Stakeholders in the tea industry in Kigezi and Ankole sub-regions are demanding to seek audience with President Yoweri Museveni.

The tea farmers want to share their concerns and challenges in the industry including government's failure to pay for supplied tea seedlings.

Their concern was raised on Thursday in the meeting held with the Minister of Trade, Industry and Cooperatives, Amelia Kyambadde and the Minister of State for Economic Monitoring, Dr. Kasirivu Balthazar Atwooki at Kigezi Highland Tea Company Limited in Kitumba sub-county, Kabale district.

Led by the Chairperson for the South Western Regional, Tea Nursery Bed Operators and growers, Frank Byaruhanga, the farmers want to meet president Museveni to know the reason why government has not honored its commitment of paying them.

He says that for the last three years, he has been trying to meet president Museveni, but in the course, a group of political leaders interrupt the meetings.

"I have written several letters and he has called me. Some time he also sent me airtime and buses to transport  the nursery bed operators  to meet him but things changed in the middle as I was still mobilising," said Byaruhanga. 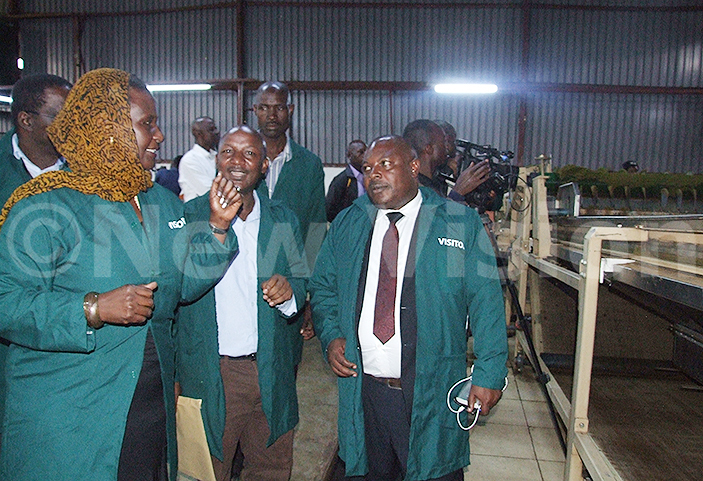 Patrick Besigye Keihwa the Kabale LC5 Chairperson says that if the tea project is not handled properly it will affect district leaders and the country negatively saying that if the government continues to frustrate tea farmers, tea factories will collapse like the pyrethrum and antinesia factories in Kabale district which collapsed after the government failed to support farmers.

Keihwa says that as government, they have a  bad case as it has had three factories collapsing in  its hands in Kabale  district where  farmers were mobilised and begun planting pyrethrum and antinesia but later the factories  after working fior few years  they collapsed as of now  the atninesia factory there is a  depot of beer.

He says that  after  the local leaders being involved in the mobilisation of the masses by the top leadership of the country but in the end it's the political leadership frustrating the farmers.

James Musinguzi  Garuga  the  Director for Kigezi Highland Tea Company Limited  then lead agency  in tea growing in  Kigezi says that all mess in the tea industry is caused by political leaders led by Dr Chris Baryomunsi  the  state minister of housing as  his theory for one to be am  MP his electorate must be poor as he has gone on and connived others like MP Kamara from Kisoro and others as he has not stopped at that as he has gone very far to infiltrate all aprons of the state with misinformation.

"It's only surprising that the likes of Baryomunsi who are killing the economy of his country are still ministers."said Garuga.