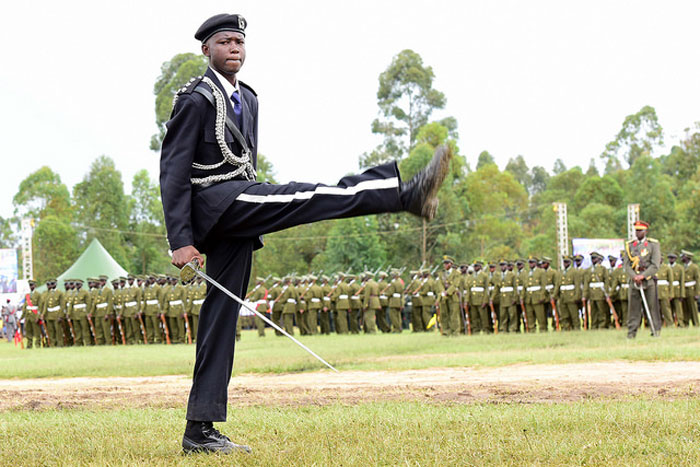 Uganda is hosting the conference after Kenya (2010), USA (2012), Malaysia (2013), Paraguay (2014), and Philippines (2017). South Korea will next host the global peace meeting in 2019, with the aim of focusing on the unification of Korea and tackling economic imbalances in the world.
TOP News STORY
Thu Aug 02 2018 .
Museveni's peace initiatives win him global award

The 2018 Global Peace Award will be presented President Yoweri Kaguta Museveni in honour of his leading peace efforts and initiatives in the Great Lakes region and beyond, Shukla Mukesh the Chairman Global Peace Foundation Uganda Chapter has announced.

Mukesh told a fully parked press conference in Munyonyo that the award ceremony for Museveni would be one of the major highlights of the on-going 3-day Global Peace leadership conference being held at the Common wealth Speke Resort Hotel in Munyonyo that started on August 1, 2018.

Flanked by the Founder and Global President Global Peace Foundation Dr Moon Hyun Jin Preston Mukesh said the Dr. Moon himself would preside over handing over the award to the president in what is deemed to be e very colorful and land mark moment of history in the making.

He said the high level strategic summit will build consensus on response towards pressing regional and international challenges guided by a shared vision, principles, aspirations, and an innovative values based approach to improving the economy, education, security, leadership at all levels of society, youth productivity, and women empowerment as well as address community development needs.

Mukesh who also doubles as the CEO Shumuk Group and Chairman Green Entrepreneur League in Uganda said the conference which has attracted the participation of various Heads of State, First Ladies, Religious leaders, Cultural leaders, Entrepreneurs, Youth, Innovators, Women, Community organisers, Development partners, Celebrities, Teachers, Policy makers, Media, Environmentalists and Civil Society Organisations would have a far reaching impact on the profile of their Organisation (Global peace Foundation) which was a nonprofit making organ advocating for ‘more peace initiatives' all over the world rather than the use of the gun to solve crises, as well as boosting the host country's profile at large in similar efforts.

According to Mukesh, the first day of the conference would focus on the business forum with a host of several high profile business personalities from Africa and across the globe sharing the same platform to discuss and share several ideas relating to business.

He added that apart from the overall agenda of the conference which was to focus on peace initiatives, they also intended to bring together several business people who share a common goal of having lasting peace within the region and the world at large since peace is a pre-requisite for businesses to thrive, without which it cannot even prevail.

"The moral to do business across the globe relies entirely on the peace situation at hand, you simply cannot do business or attract investments to a volatile region, we all know this and those are some of the issues we shall be brain-storming on and sharing thoughts about in our business forum at the conference, among others," Mukesh said.

The nonprofit making NGO appointed Mukesh as Uganda chapter chairman largely because of he's successful business story and to use him to woo several other business people to the Club and share their similar stories with stakeholders to create lasting change in society.

Mukesh urged fellow members in the private sector to come on board and support the several peace initiatives of the foundation starting from today's conference and also endevour to attend in person.

This year's theme for the annual event is "Moral and Innovative Leadership, New Models for Sustainable Peace and Development".

Hon Wilson Muruli Mukasa, the Minister of Public Service while recently told Parliament that the Conference had attracted over 1000 participants among whom are six incumbent Heads of State, including former Presidents of Nigeria and Zanzibar, who would be in attendance.

"The conference is intended to position Uganda as a regional and international peace messenger upon which will be a foundation to become a permanent member of the UN Security Council," he said.

"Uganda will be recognised after hosting the Global Peace Conference 2018, notably because of its regional efforts on peace and security, the resettlement of refugees, and the successful track-record in the fight against HIV/AIDS," the minister added.