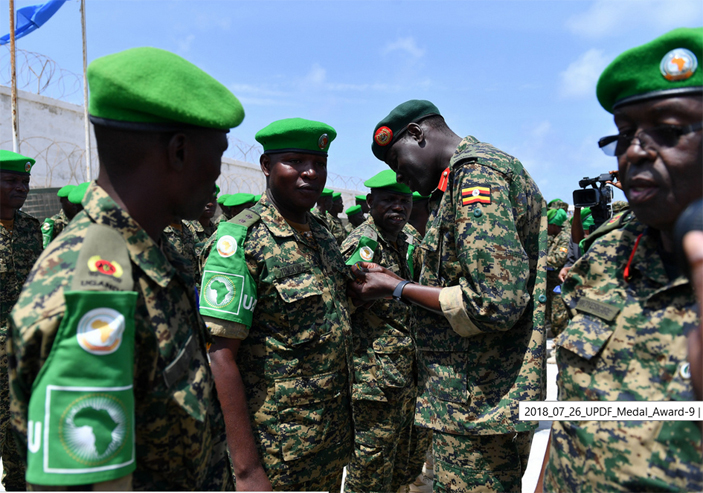 The new battle group completed its training at the Peace Support Operations Training Centre in Singo, Nakaseke district on July 16.

UPDF officers were awarded service medals by the African Union (AU) for their contribution towards the pacification of Somalia.

The first batch of the Uganda People's Defence Forces (UPDF) soldiers under Battle Group XXV over the weekend landed at Mogadishu International Airport.

The over 1,000 troops, commanded by Col. Paul Muwanguzi and deputised by Lt. Col. CK Asiimwe, have replaced Battle Group XXII that completed its tour of duty in Somalia on Friday.

The new battle group completed its training at the Peace Support Operations Training Centre in Singo, Nakaseke district on July 16.

The returning troops, who started jetting into the country over the weekend, were deployed in August last year.

They have been operating in the tough trenches of Lower Shabelle.

Speaking at the send-off ceremony in Mogadishu on Friday, Brig. Paul Lokech, the commander of the Ugandan contingent in Somalia, said the troops had shown "a deep sense of commitment and sacrifi ce" and fought against al-Shabaab in the rough Somali areas of Celjaale, Ayub, KM50, KM67, Buffor, Shalambot, Marka, Masla and Quoryoley.

Lokech also explained that the main goal of UPDF in Somalia is to help the confl ictriddled Horn of Africa country regain stability.

We still look at the scars of what we went through. But all this has been to help our African brothers and sisters; the Somalis," he said.

Lokech added: "One of the pillars in our doctrine is pan-Africanism. And that's the agenda that drew us into this mission. We have no other interest beyond this. The main focus of our coming to Somalia is to help the Somalis get back to where they were some 30 years ago."

A statement issued by AMISOM officials also noted that Lokech lauded what he described as "efforts" of the Ugandan troops to reconcile rival clans in their operation areas.

The returning troops were awarded service medals by the African Union (AU) for their contribution towards the pacification of Somalia.